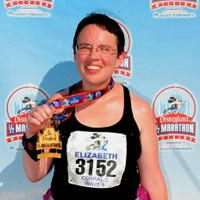 That’s me with the sun in my eyes after running/walking (and by that I mean dragging my sorry, untrained butt) 13.1 miles in the blistering Socal sun. The temperature was already 80 degrees at 6am, the start of the Disneyland Half Marathon. And our group didn’t actually start running until 6:30. By mid-day, the temperature soared to 108. I don’t know what it was when I crossed the finish line at 9:30am, but it was definitely somewhere between hot and fully baked.

But I’m getting ahead of myself. This isn’t the blog about running. It’s the one about plastic. And I have some things to say about avoiding plastic waste while traveling.

My one piece of advice is: Plan ahead! I give this advice after finding out what happens when you don’t do it. It never occurred to me to research the environmental policies of airlines or car rental companies or hotels or other cities. My friend David and I signed up for the race in January and didn’t start to think about transportation and lodging until a month before. By that time, we were scrambling just to find flights and rooms that were open and affordable, and honestly, I didn’t give a thought to ecological concerns until the day I left.

I booked a flight on Southwest Airlines, just because they are cheap and I’ve always flown Southwest in the past. And while I realize that flying is one of the least “green” modes of transportation, I think that some airlines make more of an attempt to mitigate their environmental impact than others. While on the plane, I noticed that drinks and peanuts were served in plastic cups and plastic packets and the waste collected in big white plastic bags. I had my Klean Kanteen with me, which I filled with water from the airport drinking fountain once I passed security, so I refused the offerings from the flight attendants. If this had been a longer flight, I would have packed a lunch at home to bring with me. Airport and airline food is invariably contained in plastic.

When I got back home, I did some research online to find out whether Southwest was the best choice environmentally. I couldn’t find any way to email them on their web site, so I sent a letter via snail mail last night. I’ll report back on any response I receive.

I also did a little research on a few other airlines. First, I wrote to the brand new Virgin America, just because they look like a really fun airline, what with having 25 pay-per-view channels at each seat, outlets for your computer and MP3 player, and food that you can order from the touch screen in front of you. I read that Richard Branson had committed to only purchasing two-engine planes from now on and converting to bio-fuels. But really, is an airline that gives its highest priority to mood lighting and leather seats going to be the environmental choice? Um… probably not. Still, I’ll let you know how they respond to my inquiry.

I heard that Jet Blue has a big recycling program, so I wrote to them too. And I got a really prompt response! Here is what they have to say about their environmental policies:

Thank you for contacting us regarding our environmental . (sic) We appreciate this opportunity to address your inquiry.

At this time JetBlue does not have a an option to offset carbon emissions. However our ex-CEO David Neeleman is actively perusing alternate methods for fuels that have a lesser impact on our environment.

You can be assured that we recycle everything we can including paper products, soda cans, water bottles, plastic cups, and our disposable headsets. All trash items are collected together to insure our on-time performance then are transported to a facility where they can be sorted. These items are then picked up by a contracted recycling company.

Additionally, JetBlue also recycles in our offices. We do as much of our business electronically as possible so we can be a “paperless airline”. We even encourage our customer service crewmembers to use erasable white boards instead of paper for taking notes.

We don’t serve food onboard JetBlue, only light snacks which come in their original packaging such as soda cans and plastic bags for potato chips.

Ms. Terry, we thank you for your interest in JetBlue and look forward to welcoming you onboard a JetBlue flight soon.

Hmm… maybe Jet Blue is the way to go next time.

I should also mention Continental. Continental is not really an option for me because their prices are simply out of my league. But of all the airline web sites I browsed, Continental’s was the only one that devoted an entire section to its environmental commitment. Read about them and see what you think.

Does anyone out there have other information on lesser-impact airlines? As I said, I know that flying is not the greenest way to travel. But some airlines are undoubtedly better than others.

All airports are not created equal either. Oakland International, the airport I flew out of, has an extensive waste-reduction program. There are recycle bins throughout Oakland International, and it composts food waste from its eating establishments and reuses and recycles construction debris from its building projects. In fact, it also devotes an entire web page to its environmental concerns. I’m proud that this is my nearest airport.

On the other hand, at Orange County’s John Wayne Airport, where I arrived, there is not a single recycle bin in sight. This fact did not portend well for the rest of my stay in Orange County.

As for food, since most airlines serve food in plastic trays and most airport concession food is also packaged in plastic, it’s a good idea just to bring your own. 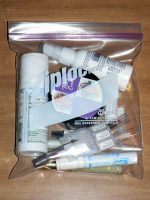 As you should know by now, the TSA has placed restrictions on the amount of liquids that can be carried onto a plane. All liquids or gels must be carried in containers of size 3 oz or less and these containers must fit into a small plastic Ziploc bag. Fortunately, I still had my Ziploc bag of liquids from the last time I flew in January, so I didn’t need to use a new bag. And I found that small, brown prescription bottles are the perfect size for carrying any liquids or gels I might want to bring.

As for drinking water, as I mentioned above, while you can’t bring a bottle of water through security, you can bring an empty bottle. I filled my Klean Kanteen from the airport water fountain and didn’t need anything else to drink on the plane. But on a longer flight, you might need to ask the flight attendant to refill your bottle. I’ve done this before on Southwest without any hassle.

I rented a car from Enterprise Car Rental at the Orange County Airport. Why Enterprise? Well, since I don’t own a car, I belong to Flexcar, a car-sharing company. Flexcar doesn’t have vehicles in Orange County or I would have reserved one of those. But Flexcar members do get a discount at Enterprise, and that’s the only reason I chose them.

I reserved an economy car, but when I got to the Enterprise rental counter, I asked about hybrids. The rep told me that they have one Prius in their fleet and that it would cost me $75 per day, not including all the insurance I already have to buy as a non-car-owner. “The Prius is basically a novelty car at this point,” he explained. Sheesh. When I use a Flexcar, I often get a Prius, and there’s no extra charge for it. Not being rich, I stuck to the small economy car I originally reserved.

Next time I travel, I will research which car companies rent hybrids and find a better option.

After returning home, to make up for some of the environmental pollution generated by my travels, I purchased some CO2 offsets.  Carbonfund.org has several calculators that let you enter your flight details, automobile miles, and other event information.

Other than a roundtrip air flight and a day of driving to the beach, most of our transportation was via our own two feet (and a pedal buggy we rode along the boardwalk.) Michael and I tend to walk everywhere already, and the hotel that I found was just a few blocks from Disneyland and anything else we needed. If I’d researched a bit more ahead of time, I probably could have done without the car altogether. And that’s the key… planning ahead.

I have to say that I love this article. I have searched for many weeks to find an article about this topic. This blog has been so simple and has a lot more features than other blog articles. The layout and design is great. I will continue to come back here for every articles.! Thanks …… .
Eva Maryam

Awesome post! I have been reading your blog a lot recently and enjoy your ideas/info/etc!!
I just wanted to point out that if you Book a flight or package on Expedia.com you can buy a Terrapass which helps offset the carbon from airplanes. (this is not a shameless plug for Expedia!! Promise!! Its more of a plug for Terrapass) That way, while you want to save $$ you can book with a less expensive airlines and still help the enviroment at the same time. Although, Southwest is unavailable thru Expedia; they work alone w/out the help of online travel websites.
Just a thought!!

For anyone in need of little brown plastic pill vials for your travel bag health & beauty aids, I’m your source and Beth, I’ve got clean, Spice Islands jars for the spices & herbs you’ll be buying in bulk. 510 845 1432

aw. im proud of your marathon! congrats on finishing it in one piece! i was at disneyland last year for my birthday and i remember the early morning heat…so gross. my own running endeavors have fallen apart a little…only ran twice this week and they were total half-assed runs. your marathon has motivated me to do better next week!
*marika

You look so cute in your post-race picture!

I’m so glad I’m married to you!

Thanks for the link to the travel offset site. I played with one of those online carbon calculators by changing different variables to see what impacts I could make. What I discovered was that one trip to visit my parents and the rest of the family is almost equivalent to a year of my normal life (no car, small home with excellent insulation, decent efficiency on the major appliances).

I think I’ll put that website on my Christmas list to try and ameliorate some of the impact of being the prodigal son who lives thousands of miles away (as if they don’t have a refuse and recycling program I could work for in the folk’s hometown). On the bright side, it’s less than if everyone else came to visit me!

Great post! Lots of things to consider when traveling I hadn’t thought about. My husband has been planning a trip to Europe for the past two years, here’s to hoping that we can remain environmentally conscience while having fun.