As much as we try to avoid buying new things in order to “step lightly on the planet,” we can still be tempted by shiny, new gadgets. Especially when they are promoted by flashy eco web sites. We shouldn’t let go of our critical thinking skills just because we happen to be browsing a site called Treehugger.com. But that’s exactly what happened to me when I ordered a free sample of the Magic Stapler based on this Treehugger review. Even though the thing is made out of plastic, my curiosity got the better of me, and I bit. 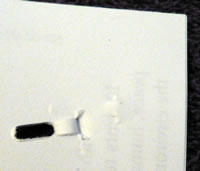 The “stapler” operates without any staples at all, cutting a hole into the paper, forming a tab which is folded back and through a slit. The idea is similar to the way we used to attach papers in school when we didn’t have a stapler handy by tearing some tabs into the top of the pages and folding them over. Except that method was free and required only our hands, whereas this method requires a jazzy plastic gadget which, as it turns out, doesn’t actually work that well. The pages pull apart very easily. 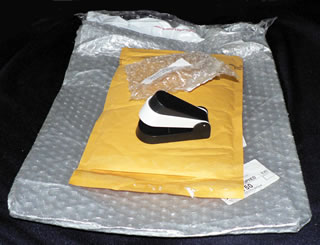 Look at all that extra plastic packaging for a tiny gadget that is meant to save staples. How many staples would you have to save to make up for so much plastic? So instead of moaning about the plastic and adding it to my weekly tally, I packed it all back up and returned it to the company after sending the following e-mail:

Hello. I received the sample of the Magic Stapler today, and I have to tell you I was disappointed in it, for several reasons.

First, it doesn’t really work. The pages pull apart very easily, so I don’t think it would be really useful to anyone except as a novelty.

But second, and most important, I wanted to see if it could be used to substitute for staples in an effort to conserve resources. I was interested in the stapler for ecological reasons, as it had been promoted as such on several environmental web sites, including www.treehugger.com.

So I was very surprised when the stapler arrived packaged in layer upon layer of unnecessary non-biodegradable and non-renewable petroleum-based plastic. First, the outer padded plastic mailer (an inside out Federal Express pad pak); next, a smaller plastic-padded mailer; and finally the stapler wrapped in yet another layer of plastic bubble wrap. In all, including the stapler itself, 3.2 ounces of plastic. I’ve personally gone an entire week only generating that much plastic waste. It’s a little disheartening to be shipped a week’s worth in one day.

Therefore, I am sending the entire package back to you. Please expect to receive it in the next few days. I appreciate your sending me a free sample, but I’d rather you take it back. And please recycle the packaging. It’s just too much to end up in our already-stressed landfills.

I mailed the stapler on September 20 and have not heard back from the company, so I have no idea how they reacted to my e-mail or package. But I was reminded of this little situation last week when a commenter on Tess’s Trash Challenge blog suggested, “What about returning the non-compostable packaging to the store from which it came? Take it to the Customer Service Dept and tell them that you are returning unneeded and unwanted parts from your purchase.”

What would happen if consumers dropped off all their extra packaging at Costco’s doorstep en masse? Would Costco stop selling credit card-sized gift cards and tiny media cards in huge anti-theft plastic blister packs? And how could we make something like that happen, anyway? The Stapler is ingenious and works well for a short while, bot loses its
sharpness and then will not pierce the four pages of A4, probably at best only 2 pages. Not good enough for regular office use. Eric

Stapler works…..you burn carbon based fuel when you shipped it back! Using electricity to blog……probably generated by coal or oil burning plant…….stapler works, you eco-nazis are hilarious

Would have been nice to have a civilized conversation with you about these issues. Too bad you had to resort to name calling.

Good for you, Beth, on returning such waste. As for the magic stapler, I own one and I love it. It was given to me as a gift for my office and I am absolutely pleased with it. Granted, I wish it were bigger so I could staple more than 4 pieces of paper, but it works very well for my smaller reports. I intend to get more magic staplers to give as Christmas gifts to my co-workers.

I have a different brand of “stapler” that folds the paper and tucks it into a cut. It works perfectly.

Excellent post Beth! I just discovered your blog yesterday and added to my blog its great.

I cannot stand excessive packaging its so wasteful all the packaging they sent with that little tiny stapler! Amazing. Love your blog!

That’s a ridiculous amount of packaging! Good you emailed them! There’s greenwash everywhere

Beth, wanted to let you know that I received a graphics tablet that I ordered from Amazon and there was not one bit of plastic in the shipment. I don’t know if this is a deliberate thing by Amazon, but maybe there is hope if such a giant company and big shipper does this.

At least no one has created plastic staples, the way they’ve, for no apparent reason and with no apparent advantage, plastic paper clips.

(I’m still annoyed about this.)

Thank you so much for this post. My stapler is broken and is a pain to use, so I decided to use up the rest of my staples and look into getting one of those stapleless staplers. I’m glad you wrote about them, because now I’m not getting one!!!

I worked in electronics for years. We would routinely go through hundreds of connectors, the kind that you find on the end of your TV cable or on the back of your TV, little metal things about the size of the tip of your thumb. We’d order 500 or 1000 at a time and they’d typically arrive in a ziploc plastic bag. Not a big deal. But, within the past few years, every single connector is in its own sealed plastic bag. So, once received, we’d sit down with a pair of scissors and extract each connector from its bag just to save space so we could store them and into the trash would go 500 or 1000 pieces of useless plastic.

Do you ever get the feeling you are like the little boy with his finger in the dike, holding back the flood?

I’m a big fan of conventional staples, anyway. In fact, if they try to take my stapler away, I’ll burn the place down, I really will.

Thanks Beth. One of your best posts for me! I had looked at that website and thought about ordering one for the novelty but if it doesn’t even work that’s just crap. Good for you for mailing it back too!

Beth-what a great post! Good for you for trying it out and not just giving it a blank endorsement just because it is supposedly eco friendly. You should comment on Treehugger so that others do not get sucked in as well.

As for all the plastic, it amazes me sometimes the length companies take to protect plastic!

Burbanmom-I used those dryer balls too and they did not work. Big waste of plastic. anna http://www.green-talk.com

Great post, Beth! I had a similar situation happen to me when I got sucked into buying “Nellie’s Dryer Balls” which promised a reduction in dryer time and soft, fluffy towels without the use of liquid softening agents.

My supposedly “indestructible” balls were packaged in a normal box, wrapped in plastic and then placed in another (oversized) box filled with styrofoam packing peanuts! I’m assuming all this packaging was meant to PROTECT A SET OF PLASTIC BALLS WHOSE JOB IT IS TO THUMP AROUND IN MY DRYER BEATING THE CRAP OUT OF MY CLOTHES!!!!!

Where has common sense gone?

Good you for you Beth! I hate extra packaging. It’s wasteful and it’s plain bad business too. Greenwash is still greenwash even if it is “endorsed” by Treehugger. Thanks for call them on it.