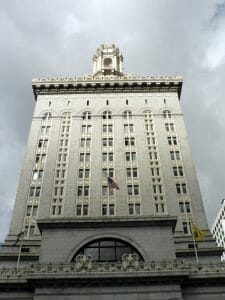 I was there outside Oakland City Hall Wednesday morning to kick off the nationwide “Think Outside The Bottle” campaign. Similar press conferences were being held in other cities around the U.S. at the same time. Here are excerpts from the San Francisco Chronicle article that appeared today, supplemented with photos from my camera:

That was the message that tap-water advocates delivered on the steps of Oakland City Hall on Wednesday as part of a nationwide campaign to persuade cities, consumers and restaurants to dump bottled water in favor of old-fashioned municipal water.

Not only is bottled water more expensive, said a group of local government leaders and officials for Corporate Accountability International, the nonprofit sponsoring the campaign, but it often comes from the same sources as tap water and most of the bottles end up in landfills despite consumer efforts to recycle them. 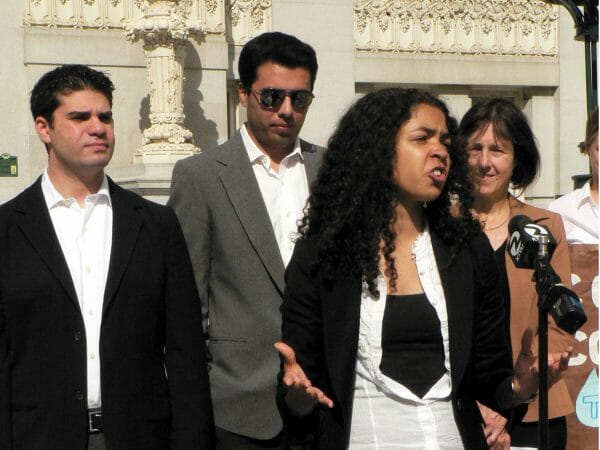 And it tastes no different, they say.

In an attempt to prove that point, East Bay Municipal Utility District Board member Andy Katz donned a blindfold and tried to discern the difference between two bottled waters and tap water from Oakland and Berkeley that his district supplies. 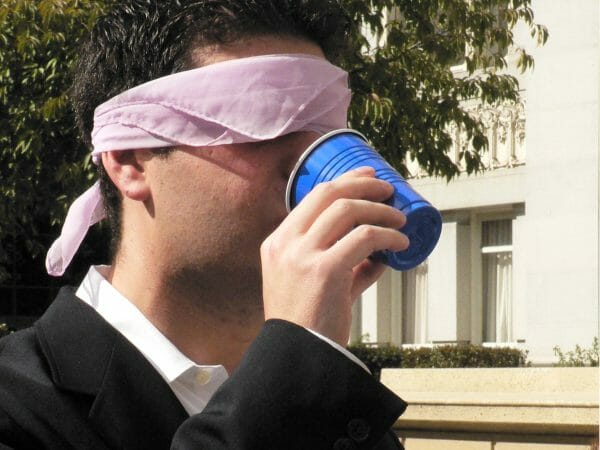 The tap-water advocates have yet to get Oakland Mayor Ron Dellums to respond to their request that the city dump its contract with Alhambra water. In a strange coincidence during Wednesday’s news conference, a member of Dellums’ security detail walked by on his way to City Hall carrying a tray with three coffee drinks – and a bottle of water.

“On its merits, this is something the mayor would agree with, but we have to look at the infrastructure in our older buildings, the pipes and how they’re operating,” Dellums’ spokesman Paul Rose said Wednesday….

And here I am with other like-minded, plastic bottle-shunning activists hoping to make a difference. 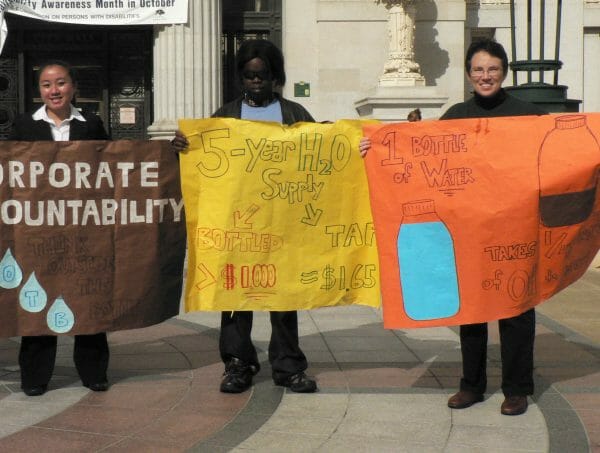 The last time I wrote about the Think Outside The Bottle campaign, there wasn’t much reader response. But I think it’s really important for those of us who care about reducing plastic waste to sign the pledge to let our leaders know that we want them to support good, clean local tap water instead of turning the responsibility over to private bottled water companies that are not accountable to us and whose sole motivation is corporate profits.

If you haven’t already, please click this link to sign the “Think Outside The Bottle” pledge. This is a nationwide campaign. Currently, the focus is on 7 cities. But Corporate Accountability International hopes to have commitments from mayors throughout the U.S. before they are through. And I’ll be writing more about it as the campaign progresses.

If we are going to get people to stop buying water in plastic bottles, we need to make sure they feel secure with drinking tap water. And in order for that to happen, our cities need to support the local infrastructure to make sure that the water that comes out of the tap is actually safe to drink. Otherwise, folks may continue to believe the hype from Coke and Pepsi and Nestle that bottled water is the safer alternative. I second Radical Garbage Man’s point about viewing public works as “less than” services provided by major corporations. They simply cannot have your best interests at heart when their #1 priority is increasing profits for their investors. When choosing services, businesses, political candidates, etc, I think about their hidden motivations. I am so grateful to you and others who are raising awareness about this. Also, I LOVE your series on the recycling plant. THANK YOU!!! It really changed how I recycle my items. I am recycling more things I didn’t realize were recyclable, and am packaging them (i.e. not in… Read more »

Hi Beth,
I don’t think New York’s mayor
has signed on to this campaign yet. In the meantime, I am working on a reusable bottle campaign where I work and where my son also goes to school. And looking for examples of other schools or workplaces that have similar projects.

You are so right. As a public employee, I worry about the broad trends towards devaluing municipal services and the shift towards privatization of what has traditionally been considered a public good. Water is a great example of this. No Impact Man has an excellent post here on this trend. A huge problem is that there is a kind of feedback loop where people are taught to devalue public services and this are less willing to pay for them which leads to cuts in public services causing people to devalue them. The thing is, the private sector doesn’t care about… Read more »