The San Francisco Green Festival was somewhat of a sanctuary after my dismal visit to the bay on Friday. It was huge, HUGE! I went intending to browse and gather information. I ended up with a backpack and tote bag full of stuff but almost zero plastic. (I’ll tell you about the one bit of plastic I’ll be sending back at the end of this post.)

Anyway, after walking a couple of miles to the festival from the wharf, I was starving and headed directly for the food court, where I was happy to see that all the offerings were organic, the tableware was compostable, and the water was piped into a water station rather than served in plastic bottles. I had a tasty veggie wrap and salad from Back to Earth Organic Caterers and filled up my own Klean Kanteen at the water station. Instead of taking their disposable napkins and compostable cutlery, I used my own cloth napkin and To-Go-Ware utensils.

I was also heartened to see many waste stations at convenient intervals throughout the festival with bins for garbage, recycling, and compost. And each station was manned by at least one volunteer who made sure materials were placed in the correct containers. It’s reassuring to think that the compostable food ware used at this event will actually end up being composted.

After regaining my strength, I was ready for some serious browsing. I was happy to see some of my favorite vendors there.

And by the way, Kristin at Straus told me that the company is working on creating a potato-based container for their yogurt to replace petro-plastic. They are shooting to have it in place a year from now. They are committed to organic ingredients and will not use containers made from corn or other GMO sources.

I ended up buying:

And I also took away a bunch of freebies from various vendors: movie passes, T-shirt, soap, chocolate samples, reusable tote bags, and even a couple of CFLs in plastic-free boxes.

Of course, there were a lot of items at the festival in plastic packaging. I didn’t bother taking pictures of or noting most of it because I’ve become so used to seeing organic, natural products packaged in plastic these days that it doesn’t phase me anymore. I just don’t buy those things. But there were two plastic problems worth mentioning.

First, my favorite grocery store in the world, Rainbow Grocery, was giving out plastic bottles of Crystal Geyser water at their booth.

Huh??? I asked the Rainbow representative why they were selling bottled water, and she replied, “We’re not selling it; we’re giving it away!” Oh, how silly of me. That makes all the difference in the world. NOT! What were they thinking? It’s not like everyone else was doing it. While a few vendors were selling their own juices and energy drinks in bottles, not a single other vendor was thoughtless enough to bring bottled water. So I asked, “Why, Rainbow Grocery, why?” And the rep showed me a stack of “Think Outside The Bottle” brochures and said she was educating the people who took the water by giving them a brochure with each bottle. Once again, “Huh???” Why not educate people by NOT GIVING OUT BOTTLED WATER IN THE FIRST PLACE? How about handing them a brochure and pointing them to the water station if they’re thirsty? 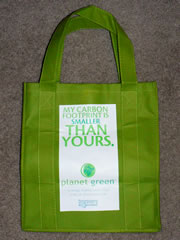 So that was plastic surprise #1. I didn’t notice plastic surprise #2 until I got home and emptied out my goodie bag and noticed a terrible smell. In fact, this smell is not unlike that of San Francisco Bay earlier in the day. It came from the Discovery Channel’s Planet Green reusable tote bag, which I’d been planning to give away. But I can’t subject anyone to the plastic fumes from this bag, besides the folks who brought it into the world to begin with. So I’ll be sending it back to the Discovery Channel with a nice little note. Funny, the bag says, “My Carbon Footprint Is Smaller Than Yours.” Somehow, I doubt it.

So, that’s my report on the Green Festival. It was a lot of fun and kind of overwhelming. There were many, many more organizations, vendors, and topics represented than I have touched on here. If you have a chance to go to a Green Festival in your area (the next one is in Seattle in April), I recommend it. But maybe leave your money and credit cards at home if you don’t want to break any vows you might have made to not buy anything new.

I have heard and read contradictory info.
On the one hand i hear that corn-based utensils can’t just be thrown into your garden; they don’t biodegrade unless put into commercial composting facility. On the other hand, this website
claims that after a couple years they will degrade through regular garden composting. any ideas?

Stuart told me about your site at yesterday’s plastic talk. I immediately checked it out. I love your enthusiasm and integrity, as well as sharing your inquiry. I too was at the Green Festival and received the smelly Discovery bag. My brain could not get around the irony of this. I brought it back the next day with a gentle message of disappointment. Thank you for you time, energy and commitment about shedding our habit of plastic. Cheers, ~aviva~

Hi Beth, I went to the SF Greenfest as well. For some reason, I came away a little disappointed. Perhaps there were just too many booths selling knick knacks no one really “need”. I learned a few things from the non-profit organizations there and discovered a couple of nice vendors – Better World books and Imagiplay (a great imaginative and non-toxic toy vendor). But I had to wade through a lot of “magic” liquid (water, drinks, whatever), “magic” bar food, and a dozen organic kids’ T-shirts. Got my Straus ice cream fix of course. That always puts a smile on my face…

It is ironic that those vendors didn’t see the water bottles or the plastic bag as an environmental mistake. I have a couple reusable canvas totes for groceries which are a better alternative.

Beth, thanks for the Green festival Update.. I went to the one in Chicago last April and was amazed at huge the event is but also how they are evolving and working hard to educate folks with the recycling and composting at the event..

I’m a bit surprised about the Rainbow Grocery plastic bottle fiasco, because they are usually known as such good green community members.. Someone there must have forgotten about the whole purpose of the festival or something. They should give everyone free yummy food to make up for it =P

Hi Mazzajo. Maybe I’m OTT too, but I do think it matters. It’s important to think about not only how you will use the object once you purchase it, but how the object was created in the first place. Were humans and animals harmed in the production process? The creation of plastic is harmful to marine life before the plastic is ever made into products for us to use. We can’t know everything that a company does. But we can be pretty sure that some materials are better for the environment than others and that some practices, especially those that are certified by outside organizations, are more sustainable than others. I say, let’s all be as OTT as we can reasonably manage to be without driving ourselves crazy!

Thanks again for another great post. I’d been thinking about “green” businesses a lot lately. There are some really great products out there, but I’m being turned off by their claims, like “completely recyclable” meaning, the consumer can re-use the item (like a plastic-based produce bag). And, “Eco-silk” meaning 100% nylon parachute material… Perhaps I’m going OTT about this? If I intend to use a (new) item responsibly, then does it matter what the company does?? What do you think?

Thank you! I always learn something new on your blog! :-)

Straus is an organic dairy and is at the forefront against genetically-modified crops. The corn used in most compostable containers has been genetically-modified, usually so that it can withstand larger amounts of pesticides. Growing corn in this country is very energy-intensive, using a lot of fossil fuels and chemical fertilizers. And the corn-based plastic that is used the most for food containers is NatureWorks PLA, which is a joint venture between agribusiness giant Cargille and chemical producer Dow.

Straus wants to make sure that its containers are as organic and non-polluting as the milk products it puts into them.

Biodegradable is better than petro-based plastic. But I think that before Straus invests a whole lot of money into changing their packaging, they’d rather wait and go for a type of package they feel is the most sustainable in the long run.

Great post! I so wish they had festivals like that where I live! Anyhow, if I could ask a question about the Straus ice cream cartons. I think it’s awesome that they are developing a potato-based container, but why are they so vehemently opposed to corn-based ones, which could be used right now? Can you educate me on this? I thought the corn-based, biodegradable stuff was good… isn’t it?