In last week’s post about tips for shopping at Safeway and other mainstream chain grocery stores, I mentioned that one way to save plastic is to buy large-sized containers. Sunny commented that for that reason, maybe shopping at Costco is not so bad. So tonight, I visited Costco with my camera to see if we really could save plastic by buying large containers there.

What I found is that yes, if you don’t have access to a store with bulk bins, you can buy large bags of rice or beans or large containers of laundry detergent or ibuprofen and save some plastic. But the thing about Costco is that most of the merchandise is not packaged in large single containers. In fact, if you’re not careful, you could end up with way more plastic from Costco than you would otherwise. For one thing, most “bulk” purchases are actually plastic-wrapped bundles of smaller items: 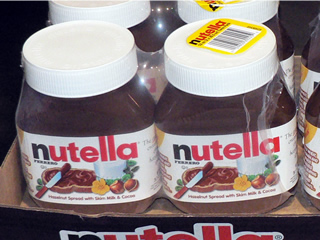 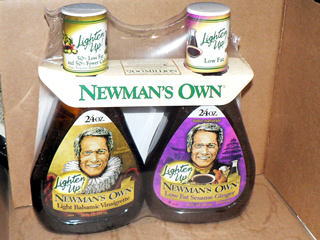 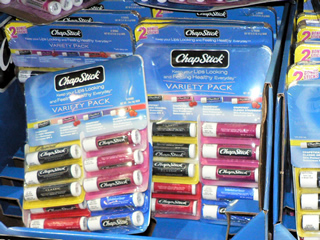 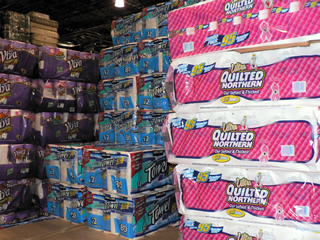 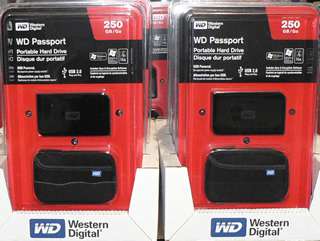 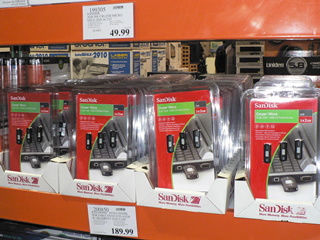 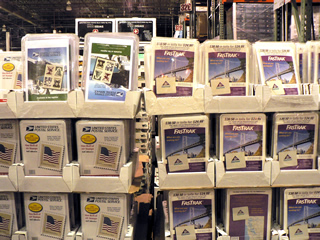 Then I saw what I thought were rows of blister-packed iPods: 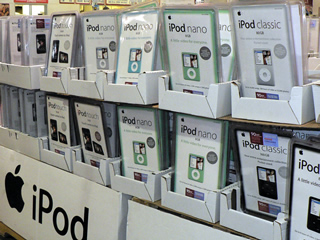 But upon closer inspection, I realized that all these plastic packs were actually empty! A little sticker on the package says, “To purchase your iPod, please present this empty package at the register.” So why do these empty packages have to be packaged in plastic? A simple cardboard card wouldn’t suffice? I should have asked an employee what happens to the empty iPod blister packs after the iPod is purchased. I’m assuming they can’t be put out on the shelf again if they’re being used for inventory control. Or are they? Anyone know?

Plastic at Costco. Plastic galore. But wait. There’s even more! Unlike most regular grocery stores, Costco packages most of its produce in plastic containers, too. 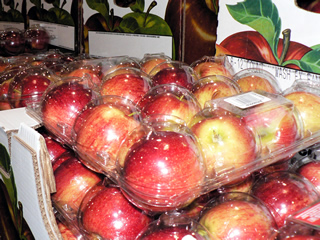 And if you look up and down the overwhelming rows of merchandise, the one thing each aisle has in common is the plastic wrap surrounding every palette of goods: 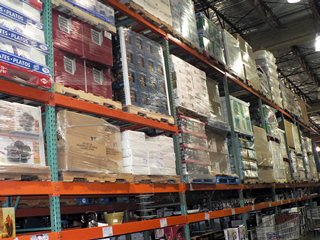 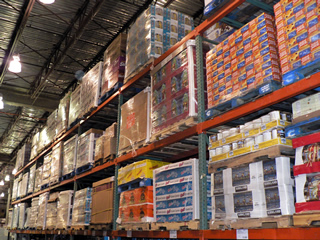 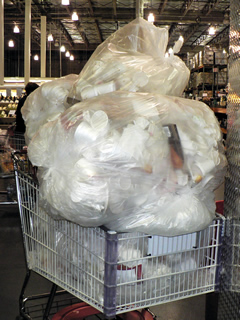 And here’s a photo I thought I’d throw in just because. I felt like a little spy tonight creeping around with my camera and waiting until employees left the areas to snap my pictures. I took this one in the seconds before the guy returned to his cart with more trash.

So what’s the moral here? If you are truly disciplined and you really have no way to buy the products that you need plastic-free, you might save some plastic by buying them in large containers at Costco. But even then you need to be careful! If you buy a container that holds more than you can actually eat (or more than you actually should eat) you’re still not saving plastic in the long run, are you?

A few years ago I read a news story describing a study that related the size of the container to the amount a person ate. According to a University of Illinois study:

External cues such as packaging and container size can powerfully and unknowingly increase how much food a person consumes. Do they still, however, stimulate consumption as the perceived favorability of a food declines? This was examined with popcorn in a theatre setting. Moviegoers who had rated the popcorn as tasting relatively unfavorable ate 61% more popcorn if randomly given a large container than a smaller one. Moviegoers who had rated the popcorn as relatively favorable ate 49% more when the container size was increased (and were likely to eat greater amounts if accompanied with a person of the opposite sex). One reason for this increase was that consumers had more difficulty monitoring how much they ate from large containers.

And I would add that you’re probably also doing so at the expense of extra plastic. So for the most part, I think Costco is a trap. Even I didn’t get out tonight without buying a couple of things: 2 bottles of wine and a big hunk of cheese. Oh, and a slice of pizza. I do love that greasy, cheap Costco pizza. Talk about calories! Believe me; I won’t be going back again any time soon! Also, most Costco plastic packaging does not seem to have a symbol indicating if it is recyclable and the type of plastic (usually indicated by a number between 1 and 6). So all the packaging from Costco ends up going to trash. When there is a number, it is often type 5, which is not recyclable in my area

2007 to today in 2015, guess I’m a bit slow but my eyes opened to almost 100% plastic at Costco. I’ve been a member since 1988 and it is time to end it! I am shopping at Farmers Markets (eggs, fruit, vegetables), fish market, tofu factory, and buying whole grains online, storing everything in glass and freezer, frig. Bought glass pour over coffee maker, biking to buy my things…..

Michelle and Herself, I know you guys are certainly right about the plastic wrapped around the pallets. All the warehouses probably do it that way and we don’t see it.

But Costco is absolutely different from other grocery stores in how it packages everything in blister packs and clamshells and creates bulk items by shrinkwrapping two or three together. I haven’t shopped at Sam’s Club, so I don’t know if it’s the same plastic deal as Costco. I am certain that Costco is using way more plastic packaging than a lot of other stores.

I agree with what ‘herself’ said. I wouldn’t be surprised if other stores get their merchandise in the same plastic wrapped pallets. The difference is that the stores open up the containers, seperate the packages and throw the plastic away before the customer sees it.

That is an obscene amount of plastic! Especially the clam shell enveloping the apples. Why?!
I have found a good place to buy some bulk foods near where I live – a shop that serves mainly the Indian ethnic community. It has spices and loads of types of lentils and other delicious ingredients in bulk bins, and sells raw almonds cheaper than anyone else. A Chinese shop nearby is another good place for buying other things in bulk, though theirs aren’t in bins unfortunately.

I find Costco too overwhelming so I try not to go but occassionally I will get my parents to pick something up for me – like a giant bag of skim milk powder (for baking, yogurt and milk bath mix). However, I have always been disgusted by the individually wrapped toilet paper. My parents used to bring it home and it drove me nuts. What is the point of wrapping each roll in plastic and then wrapping it all together? Even in businesses you rarely see extra rolls lying around so it can’t be for hygiene reasons.

Those bloody ipod packs! Those have always bugged me.

The difference between Costco and other stores is that you see all of the plastic wrapped around the pallets of goods. Other stores get the goods after all of that plastic has been removed.

As for apples in plastic, well, you can avoid it by getting your veggies at the farmers’ markets.

Back before Beth was doing her blog and we knew better, we bought a whole big plastic package of CFLs, the kind with the very strong edge through which you have to cut with pruning shears or a lightsaber. We thought we were getting a good deal by buying in bulk. The packaging is so unmanageable that in the course of getting a CFL out, we broke it, permanently poisoning ourselves with the mercury inside. Beth wrote about this a few weeks ago, and how she had found cardboard packaged CFLs. But I didn’t realize they had them at Costco.

Okay, so I’m guilty of the chapstick con. I use a lot and was really ticked when I got home to find out that it was individual packages in a bigger package. I guess it depends on what you buy. I don’t shop too much at Costco but things like the toilet paper (Kirkland brand) really aren’t too bad. One large bag but the rolls are wrapped in paper inside. The dog food doesn’t make my dog gassy. I agree about the empty blister packs and who buys apples in a plastic “clamshell.” I hope I’m picky enough that it works well for my pocket book and fairly well for the environment. How fun to spy though, ey?

Yikes! That’s a whole mess o plastic. I try to avoid places like Costco, Target, even Safeway. I don’t have the most will power in the world and those places will just suck you right in. Thanks for all the pics – and saving me from making a trip myself. :)

Wow! That’s a whole lot of plastic. Thanks for being so brave to go take pictures somewhere like Costco…I’m so chicken about taking pictures in places like that.

That’s so funny. I went to Costco yesterday and came to the same conclusion! A few items will save on packaging, but most are just double-packaged. I did find a few keepers, though:

Cheese wrapped in what appears to be paper. It’s called Dubliner Kerrygold All Natural Cheese. The downside is that it’s imported from Ireland. So I don’t know if the plastic trade-off is worth it. I bought it anyhow, just to try it.

The other keeper was a 10-pack of 13W CFL’s that is not in a huge blister pack. They’re in a cardboard box instead. The downside on this one? They have a plastic window area (like on a pasta box) to show you three of the actual bulbs. You know, because we couldn’t figure out what they look like by the pictures of the seven other bulbs on the package! Grrrrr.

If I ever figure out how to shrink the file size of my pics, I’ll snap some photos and put them on my blog.