This past week, I panicked when I discovered that the tubing used in my new Multi-Pure counter top water filter system, which I bought in place of the Brita we had been using, is made from virgin PVC. 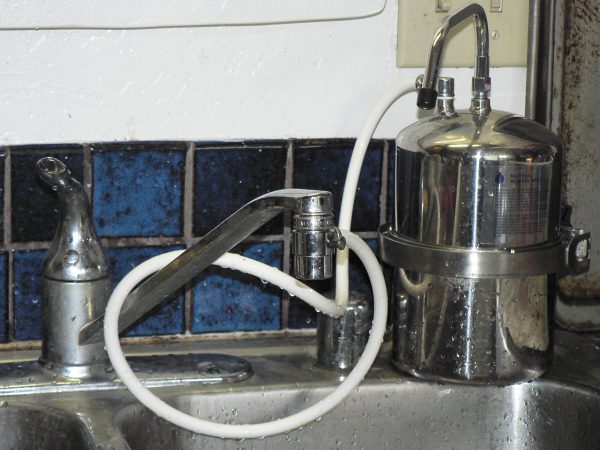 As I wrote on October 29, I was already somewhat disenchanted with Multi-Pure because of the volume of plastic bubble wrap in which the unit and filter cartridge were wrapped. But it wasn’t until the unit was installed and working that I actually read the fine print and discovered the more serious problem of PVC used in the product itself.

When I called Multi-Pure to address this issue, I was told that the tubing had been tested by NSF and found not to leach anything harmful into the water. However, the rep was unable to confirm whether phthalates such as DEHP, the chemicals that are the biggest worry, were included in the list of possible contaminants for which to be tested. But regardless of whether or not this particular tubing is leaching anything harmful into my water, I decided to send the unit back anyway.

So what’s the big deal about PVC? And if the tubing’s been tested and found not to leach, why send it back? Here’s a rundown of the problems of PVC:

Whether or not the tubing in the Multi-Pure system actually leaches phthalates into my water, I don’t want to support the production of a material that is so harmful to humans and the environment in general. So this morning, I shipped the Multi-Pure unit back to the company.

And then tonight, after reading that PVC cannot be recycled, and realizing that I had included several #3 Act fluoride rinse bottles in my recycling in the last few months, I went through my cupboards and refrigerator to see if there were any other PVC culprits still lurking in the house. Sure enough, I found four of them: 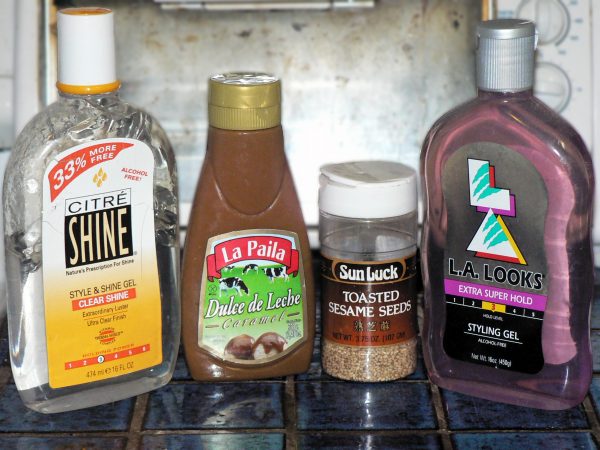 Number 3 PVC bottles look very similar to clear number 1 PETE bottles. In fact, many manufacturers have switched to #1 plastic as an alternative to PVC. The only way to tell is to look at the number on the bottom of the container. #3 means PVC. Unfortunately, it’s not so easy to tell when other, unlabelled products are made from PVC. These can include children’s toys, shower curtains, window blinds, flooring, pipes, house siding, insulation, roofing membranes, protective pipes for electricity and telecom cables, casings for electronics, refrigerator gaskets, power cords, carpets, furniture, the inside of screw caps, shoes and boots, purses and luggage, raincoats, T-shirts with plastisole prints, packing tape, vinyl records, the covering on ring binders, strollers, garden furniture, tarps, car interiors, and more.

So, what do we do with PVC that we already have? The CHEJ report “PVC: Bad News Comes in 3s. The Poison Plastic, Health Hazards, and the Looming Waste Crisis” recommends either disposing of it at a hazardous waste facility or sending it back to the manufacturer and letting them know that PVC is an unacceptable material for them to be using. For the four items I found tonight, I think I’ll go on a research mission and see if these products are still being sold in #3 bottles. (Act fluoride rinse, by the way, is now contained in #1 PETE.) If the bottles are no longer #3 plastic, I’ll just toss these current containers into my hazardous waste bag for later. But if the products are still being sold in PVC bottles, I’ll send these back to the manufacturers with a nice note.

Now once again, I am without a water filter. What to do? Well, how about something I should have done a long, long time ago: testing the water to see if we even need a water filter in the first place! Last week I purchased a Culligan water test kit at Ace Hardware and did some preliminary home tests. Turns out, our chlorine and chloramine levels are much lower than I expected! I mailed a water sample away this morning to be tested for lead. If that test comes back okay, I think we’ll drink our water unfiltered and save a whole lot of money and plastic. Imagine drinking water straight from the faucet again, just like we did as kids. What a nice idea. Tetrahydrofuran (a known carcinogen in animals) has been known to leach from PVC and cannot be effectively filtered with carbon.

also, anybody tried retrofitting their Multi-pure with flexible stainless steal? any success?

Hi Demetria. First, you could put your tap water through reverse osmosis if you're concerned about those chemicals. Because actually, what do you know about the chemicals leaching into the water from the plastic water bottle? Did you know that all soft plastic contains chemical additives called plasticizers to make it soft? Many of these additives are hormone disruptors. In fact, there are links between the chemicals in plastic bottles and breast cancer. Plastics contain other types of additives as well. Do we know what they are? Usually not. Because manufacturers are not required to disclose the chemical "recipes" for… Read more »

I think that there's a trade off between drinking unfiltered or filtered tap water and bottled water, because recent reports have shown that a lot of municipal water supplies are contaminated with residual chemicals from prescription drugs, which is something that would not show up on a home water test kit. Based on this, I have personally opted for bottled water from a natural source, that has gone through a reverse osmosis process – packaged in a #1 plastic bottle. Just some food for thought.

Thank You Lex, Multi-Pure filters really are the best (no other water filter reduces more contaminants)As for the pvc plastic tubing, I would like to know what Beth herself would recommend. Then, maybe I could make a suggestion to the good folks at Multi-Pure to see what we could do about this situation. I do not know a lot about plastics, but I’m sure Beth would be able to make some sort of recommendation for us. Maybe surgical rubber tubing? I would love for her to contact me and let me know what she would suggest, so I could talk… Read more »

I have same multipure filter and I also questioned the PVC, altho I am still using the filter, I wish they’d use something else for the tubing. You could switch the tubing or get a local plumber to. Or, you could undersink mount the filter.

Now people are starting to use plastic tubing instead of copper in homes, plastic seems to be getting bigger all the time. I’m glad to see you questioning its use!

In Response to Dedee.. I have in no way perpetuated "false information" intentionally or unintentionally. I personally did not know about the dangers of pvc until I found Beth's wonderful site.It is sites like hers that help to inform the public & I thank her for bringing it to our attention. In response to the pvc issue, I myself have brought this to the attention of the recently started "green team" over at Multi-Pure, and they will be looking into alternatives to the pvc tubing that is currently being utilized. Although the pvc tubing poses no danger from the stand… Read more »

@Laura
PVC is toxic PERIOD and there is ample evidence of this fact.
I can not believe anyone who sells any kind of health product would make excuses for something so obviously wrong. You only raise suspicion of your product and your credibility.
Instead of perpetuating false information, why not help customers find alternatives such as polyethylene, which is much safer and not that much more expensive. Why not offer a choice for those of us who know better?

PVC production is a scourge on humanity and should be banned.

Beth, I am an independent distributor for Multi-Pure water filters. Have you thought about this? How many millions of plastic water bottles are multi-pure keeping out of landfills by converting people from bottled water to filtered tap water? The small amount of pvc, that multi-pure filters use will last for years! & will bio-degrade. A plastic water bottle takes 1000 years to bio-degrade. While I understand your concern about the pvc, the alternative (drinking bottled water) far outweighs the risk of pvc. AND if any chemicals leach from the pvc, it is filtered by the carbon block filter. (which is… Read more »

hi beth,
thanks for your comment over at my blog Pillowbook about the Klean Kanteen. love your site; it’s so meticulously researched and i’m glad you let companies know when they’re doing something right and wrong.

such terrible news about the oil spill in the bay–i used to live in oakland so i can only imagine the local response.

As always, I am amazed by the amount of research you do.
I keep hearing that New York’s is one of the best tap waters around, yet we filter anyway. Now that I’ve found out that Clorox is Brita’s parent company (ironic?), I think it may be time to kick the filter habit.

Thanks! I emailed a nice note to Target. :)

So I tried to leave a comment on your blog but it kept telling me it couldn’t leave one. But I was just saying that at first I was afraid to read this because I LOVE my target and I was scared that you were going to report something bad on them (although boyfriend has said that they are republican based and that he’s heard they wont do birth control prescriptions at the pharmacy although I have never heard anything official on that, but along those lines I know that Walgreens wont do birth control prescriptions. My very good friend… Read more »

I wonder what happens to our #3’s. Our waste company and county tell us to put them into the recycling bin. Perhaps I’ll look into that further. They already think I’m a nut but who cares. Thanks again for your blog.

In NYC we recycle #1 and #2 small-necked plastic bottles. I never really thought to check the numbers to see if I am throwing in #3s. Thanks for pointing that out!