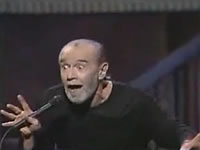 If you haven’t seen George Carlin’s infamous rant about the arrogance of thinking we can “save the planet,” you should. It’s here on YouTube. But I warn you: it’s not for the faint of heart, delicate of sensibility, or young of age. I haven’t embedded it in this post because I don’t want to be accused of corrupting the young. Again. (Hi Hayley.)

Here’s a sample, (one of the few bits without four-letter words) as Carlin begins his unique rap about plastic:

The planet has been through a lot worse than us… been through all kinds of things worse than us. Been through earthquakes, volcanoes, plate tectonics, continental drift, solar flares, sun spots, magnetic storms, the magnetic reversal of the poles, hundreds of thousands of years of bombardment by comets and asteroids and meteors, worldwide floods, tidal waves, worldwide fires, erosion, cosmic rays, recurring ice ages, and we think some plastic bags and some aluminum cans are going to make a difference?

I was reminded of this monologue twice this week: first, in the comments on Fark.com and then this weekend while visiting a friend’s father who is living with terminal cancer, and who is just as salty and irreverent as Carlin was. AO’s war stories were mesmerizing, and his jokes had us in stitches as he held court from his bed.

Tonight, I’m thinking about the visit and the video as I try to write my blog post for this month’s APLS (Affluent Persons Living Sustainably) Blog Carnival. The topic is “Nature.” What is it? “What makes nature so powerful or meaningful? How has your experience with the natural world shaped your own environmentalism? Is love of the natural world an essential motivation for sustainability?”

And to that last question, I feel myself channeling my own inner crusty old man as I mutter, “Of course it is, but not how you think!” Because I am the natural world. So are you. So is plastic. Just ask Clif. Every breath reminds me that there is nothing separating me from anything else. My senses, as I walk down the street, ride on BART, stare at my computer, or pull weeds in my garden, let me know constantly that I am not alone.

The nursing home room where my friend’s dad is spending his final days is anything but “natural” in the traditional sense of the word. It’s sterile. Artificial. Efficient. And full of plastic. Yet in this man’s wryly optimistic presence, I felt a deep, deep connection to humanity, to the body, to the miracle of each heart beat and to the constant thread of life, the thread of which death is a natural part. And there’s that word again.

I’m not saying getting out to the woods or mountains or local park isn’t a good idea. We know our bodies and minds do better when we give them space and clean air and earthy smells. And we ought to be working to even up the playing field so that no one has to breathe smog and drink contaminated water. Children should be taught where their food really comes from and how the many non-humans on the planet live.

But compassion can arise anywhere in any situation. I was casually browsing the Internet when I stumbled upon the photo of the Laysan albatross carcass full of plastic pieces, the photo that broke my heart and caused me to question the unconscious way I had been living. We don’t literally have to hug a tree to care about life on planet earth.

But actually, it probably does help.

Because for some reason, most humans today do appear to feel separate from “Nature.” Why else would we have created such a word in the first place? A word that implies something other than what we are. Our minds can be such tricksters, desperately holding our personalities together, convincing us that we are special, that we are different and in charge. But our monkey minds are part of nature too, having evolved in just this way to ensure our survival. And it’s these brilliant, deluded minds telling us we are separate that may be also ensuring our destruction as a species.

So let’s get out, stick our noses in the grass, squish our toes in the mud, watch a group of ants for an hour and maybe even taste one (my little sister used to eat them off the kitchen floor!) And then let’s go inside and watch Planet Earth on TV, all the while reminding ourselves that nature isn’t something out there to be saved. It’s us. Right here. Wherever we are.

George C. says the planet will be fine without us. We’re just another species. Ultimately as expendable as all the other forms of life that have gone extinct. And I have to agree. Death is part of life, after all.

He also seems to think we’re already screwed. I hope not. I like being part of this world. Don’t you? I like that tree hugging idea. I’ll have to tell Red. See you tonight, Beth.

A massage therapist I used to know once old me “Cat, if you ever work on a really sick person, be sure you go out and hug a tree afterward.” She believes that the energy of the illness can transfer from the patient to the practitioner, and that a tree has the power to take that “harmful” energy out of the practitioner and convert it back into something neutral. So, at least in her world, tree hugging IS very beneficial!

I have been reading “The World Without Us” and the premise is not too far from George’s. Earth will survive.

Humans, on the other hand…

This post is why I love you Beth. Also because you take me to Rainbow Grocery. :)

Interesting – I find myself very separated from nature in my daily life and find that people seem to being doing more of this as well. I think quite a bit stems from a fear of ‘unsafe’ conditions. Nature is beautiful and inspiring and all that, but pain is also part of it. Nature is mean – it’s poison and disease and death, too. I think as humans we’ve been able to isolate ourselves from some of that, so we do. It’s for protection as much as anything else, we just seem to be able to take it to the extreme these days. The interesting thing is, the more we seem to stay away from it, the more it kicks us around (e.g. the less you’re exposed to, the weaker your immune system, etc…)

My sister and I had a similar discussion, except we didn’t quote from George Carlin. She argued that the planet would be fine without us.

I wish I had told her that I agreed with that idea, but in the meantime, I don’t want to be killed off by the planet because of what we’ve done to it. I also like living here.

I’ve no doubt that humans are here to stay. We are just too intelligent and adaptable to disappear even from our own negligence.

If you want a mini-example of what can happen, read The Worst Hard Times about the Dust Bowl of the 1930’s. In that case newcomers arrived in a stable environment where grasses held the soil, bison ate the grass and Indians ate the bison. A huge amount of grass, a pretty large number of bison and a small number of humans.

But there was money to be made. The Indians were chased off, the bison were slaughtered, the grassland was ripped up and wheat planted. 5 years later: disaster.

Despite the destruction and devastation – people stayed. A stable environment made over thousands of years was destroyed in a couple of decades and turned into a desert of blowing sand and teeming insects. Folks may have been eating boiled tumbleweed but they stayed.

So not to worry – humans will be here. We are made for struggle, we’ve proven ourselves triumphant in that regard. But what irony if we send ourselves right back to struggle after escaping it!

Consider the Garden of Eden story a little differently: God stays out of the picture and Adam and Eve are left alone to do as they wish. Given a few thousand years, does it look like the story will have a different ending?

Thank you for this post! Sometimes I think the belief that we’re separate from nature is going to be the end of us.

We didn’t invent the idea of “nature” vs. “civilization” until pretty late in human history, after we had gotten to the point where we had control over a big chunk of our environment. But it’s sure taken over.

The idea of “unsullied nature” wasn’t common in European thought until about the 17th century (along with the scientific method and big cities – China had all three about 700 years earlier) and the Romantic ideal of nature was even later.

Great post Beth! I totally agree. Ultimately, the Earth and probably many of its species will survive no matter what we humans do. It just may not be suitable for humans to live here any more, and that would be a shame….I kinda like it here! Thanks for the reminder to get my nose out of the eco-books and get back out into nature.

I love being a part of nature. I garden for this very reason, to get out and get dirt under my fingernails. I love nuturing a plant and having it produce something delicious that I can eat and improving my little part of the earth while I’m at it. I know that when I move or die, my little gardens will be better because I was here (not a thing many people can say – particularly the ones that lived here before us).

I choose to focus on the change that I can make in my little corner of the world, not the cumulative effect of what everyone is doing. In the end I can make a big difference here, I get discouraged if I think about everyone that’s negating my efforts.

When I think Of George C i always automatically think of the 7 words you cannot say on television (Shows you were my mind is at)But your post reminds me he said “the planet will always be here- we wont be but the planet will.” I am afraid there is a lot of truth to that sentiment.

Humans living a stone-age life seems to be just about right, according to my friend, Earth.