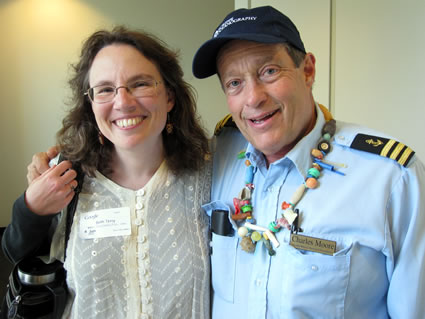 Captain Charles Moore is one of my personal heroes and the man whose work discovering, studying, and bringing the world’s attention to plastics in the oceans changed my own life completely two years ago. So you can bet that when I was invited to attend his presentation at Google in Mountain View last week, I rearranged my work schedule, rented a Zip Car, and got my butt down there.

Captain Moore’s story is the subject of the article commonly known as Plastic Ocean. If you haven’t read it yet, stop what you’re doing and read it now! But be sure to return to this page afterward to listen to his important message for all of us. 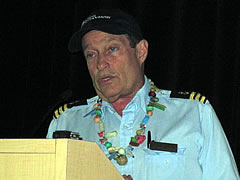 Moore is not much taller than I, but his presence is captivating and the force of his conviction, palpable. Wearing a necklace made of plastic found out in the North Pacific Gyre, he is a man who has looked into the abyss, not once but repeatedly, and returned to warn us about it. His eyes twinkle, but they also look deeply tired. He has been trying to get us to wake up to the damage we’re doing to our precious planet for over ten years, and the world is just now starting to listen.

Moore’s presentation included many samples of the types of plastics found in the Pacific Ocean and that wash up daily on the world’s beaches, as well as a hat knitted out of some of that plastic, which he sometimes wears. 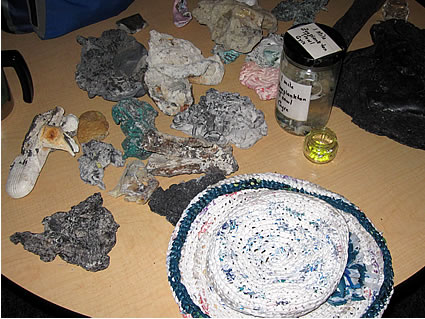 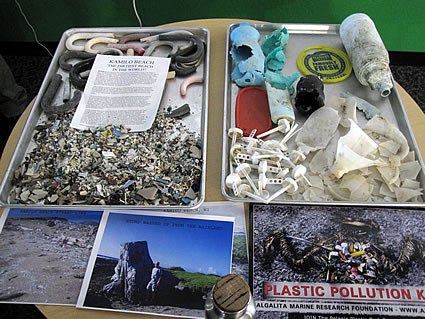 And he is a living testament to his convictions. His bag, knitted from plastic grocery bags, is a reminder of plastic in the environment, while his naturally-corked stainless steel water bottle demonstrates his dedication to reducing his own personal consumption of plastic. I must say, I’ve taken many, many steps to lower my plastic footprint, but seeing that cork in his Klean Kanteen blew me away. 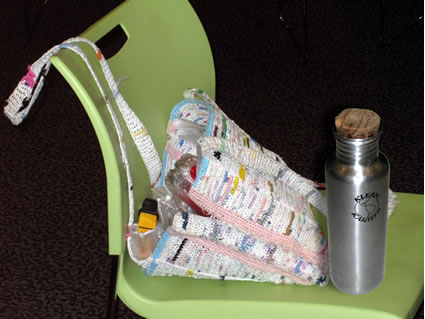 Natural alternatives to plastic may be well and good to an extent. But Charles Moore’s message is not about running out and buying “green” products. Just the opposite. In fact, from the things he said during his presentation and in the meeting with him afterward, I don’t believe Charles Moore believes that plastic itself is the main problem in the first place.

The plastic pollution problem is the visible manifestation of the crisis of our civilization. (There’s so much more that is invisible.) Progress is not what we’re after here. Everything has to be redesigned. We need a new paradigm that subtracts from the consumer lifestyle rather than adding to it. We’re after difference. The Great Refusal.

I asked Captain Moore what he thought was the most important thing we as individuals can do. Here is what he said:

Today is World Oceans Day. But according to Moore, the crisis we are facing is about more than the oceans or plastic or pollution. Plastic pollution is a symptom of a way of life that is completely unsustainable.

Today, I plan to get still and meditate. How about you?

Read/view the group’s statement on plastic pollution developed by activists, artists, and environmentalists after Moore’s presentation at Google.

That is awesome and I'm so happy you got to see him!!!

The book 'Cradle to Cradle' deals exactly with the subject of examining the things we produce and recreating them as sustainable. Check it out of your local library – and if they don't have it, see if your library does interlibrary loans!

Wonderful post, thanks for pointing me at it. I left the house and saw plastic everywhere I looked, then watched a film set in the 1950s and saw no plastic at all in it.

Will be doing the Plastic Trash Challenge as soon as I can get it organised.

@Jen — Absolutely! As long as you refer and link back to this post, okay?

Great awareness clip Beth. Can I repost it on my blog next week?

Lara, that piece of biodegradable plastic is not doing a darned thing. But I think it actually needs heat and maybe something else in order to break down. I need to check in with Radical Garbageman about the piece I sent him, too.

Hi Beth
I don't know why, but I just remembered that piece of "compostable plastic" you put in a pot with some earth. Have you checked if it's breaking or something?
Just curious…

Now he's one of my heroes too! Thanks for this, Beth!

wow that was so awesome, thank you!

Beth,
This is an awesome and informative post. How neat that you had the opportunity to meet Captain Moore. I totally agree with all of his points. Thank you for shedding light on this issue and for being a pioneer in reducing your plastic waste!! Linked up to this post.

excellent post and video and how true that plastic overuse is just a symptom of our consumerist mindsets.

Beth– it cannot be said enough times: we are drowning in stuff.

I used to be a terrible impulse buyer. I now try to wait 48 hours before making most purchases and it is really shocking how my urge to splurge goes away.

Wow! Now that's a post! I primarily cover safe, natural cosmetics, and recently put up a little article about the plastic exfoliant beads contained in some products. These bits of plastic also end up in our waterways and wildlife when we rinse the creams down the drain. Come on over if you want some alternative ideas to try when you ditch poisonous cosmetics in favor of karma-free choices! Thanks! Peace! kitty

I agree- People need to learn to say No! Easy for me to say- but it is true. We got too much crap! I have benn learning to buy at garage sales- recently I found a "garden weasel" at a garage sale- important- No did I need it -Probably not but the point is I got one after wanting one for a long while, and by buying used There was no packaging, no shipping and no waste! I wish more folks would buy used- and I wish for myself to start checking the craigs list and garage sales when I want something new!

Beth – what a great experience to meet Capt. Moore and bring this video back to us. You know, the Story of Stuff talks about our consumption and commercialized society. It's how our country works and it's destroying our planet – but like Capt. Moore said -it is killing us by taking our time. Recycling is not the long term answer. Consumers can have their voices be heard with their pocket books, but we really need to look to companies and gov't officials to make the big changes necessary.

I have been searching for a reusable stainless steel water bottle without a plastic lid. I even searched under army canteens but they ALL have plastic. How clever of Capt. Moore to use cork!

My worm farm produces "castings"; the waste from the digestion of the worms. I throw in all kinds of veggie stuff and within days it is turning to castings – they appear at first as a light sprinkling but finally, if I put no more material in, the worms are literally buried in their own waste and the entire bin is a uniform dark brown. If I did nothing they would all die and I mean every single one.

Messages to humanity: there is no extraterrestrial being who is going to look into the worm bin we call earth and set things right when we are buried in our own waste

We are worse than the worms because we produce waste not only from what we eat (that waste is almost of no consequence) but from the things we use.

Even this would not be so bad but for the fact that we create things that will outlast us many, many times over.

So maybe that is a thought worth running with – make nothing that can survive longer than a human does. If it lasts more than 100 years, it lasts too long.

P.S. Everybody should get a worm farm! Mine is in the dining room, for Pete's sake and it causes no problems – no smell, no mess and best of all, no more throwing of food waste into the garbage.

The part of freedom being taken from us by consumption, is a point of view I had never thought about. Thank you Beth and Captain Moore for teaching us!

How awesome! Love the crocheted bag and hat!

Here is another article addressing issues closer to me, How Green was my Valley.

As an aside, the "knitted" items out of plastic look like they were actually crocheted.

And Tracey, let me know if your school ever comes to fruition, I'd like to apply to be a member of your faculty.

His words and your blog today bring me back to my old days at the anarchist vegan commune Kathedral B where we avoided everything money could buy except for coop groceries and tried to do everything from scratch ourselves. Someday I want to have a school that teaches skill for sustainable living – from flannel diapers to soymilk to growing food to cleaning things naturally.

I had a vintage in 1950s old school cork and glass thermos once. Boy, did it keep things HOT!!!

Thanks for today's inspiration!