Friday, June 5, is World Environment Day, which has received a lot of deserved attention, but did you know that a few days later is World Oceans Day? 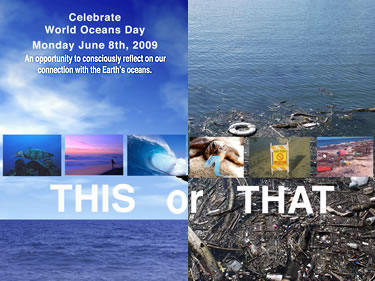 World Oceans Day has been unofficially celebrated since its inception in 1992, but 2009 is the first year it’s been officially recognized by the U.N. A plethora of events will be held in the world’s coastal regions all next week to observe the day and learn about our connection to and effect on the world’s oceans. From beach cleanups to film festivals to educational presentations, there are many ways to get involved.

This Sunday, June 7, 10a-12p, I’ll be joining the Ocean Beach cleanup in San Francisco (Judah Street Entrance), wearing my Plastic Sea Monster costume. This event is sponsored by Oceanhealth.org and San Francisco Surfrider Foundation. I’d love to see some of you Bay Area folks there!

Complete information about the beach cleanup and film festivals, including how to RSVP, can be found at Oceanhealth.org.

Now, how about you landlocked folks? Think you don’t have an effect on the oceans? Think again! No matter where we live, everything we flush makes its way to an ocean eventually. Everything we litter, the products we buy, the fish we eat, and the CO2 we emit all affect the health of our oceans.

So what are you going to do to observe World Oceans Day next week and every week thereafter?