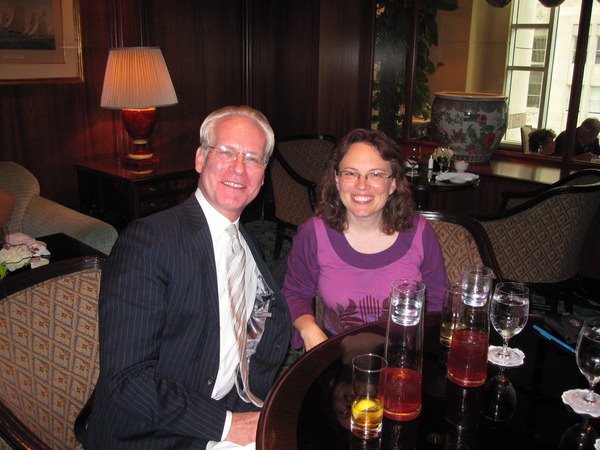 I have a lot to say about the Blogher Conference, plastic, traveling, Chicago, disillusionment, and frustration.  But first things first!

I won a personal style consultation with Tim Gunn!

You got that right.  It’s Tim Gunn from Project Runway: probably my favorite guilty pleasure TV show.  I don’t normally enter contests, but this was one I couldn’t resist.  Last week, I found out I had won (and spent a few days obsessing about what to wear before giving up in futility), and this afternoon, I joined him at the Four Seasons for lunch.

(Whatever your feelings about style, the fashion industry, advertisers — the contest I won was sponsored by Tide — or reality television, this post is not about those things. It’s about a one hour human connection, and that’s all.)

What I thought was going to be a makeover and style criticism consultation turned out to be a lovely meal and conversation about all sorts of things. I presented Tim with a gift of GlassDharma drinking straws, which he found very unique, and he presented me with a signed copy of his book, Tim Gunn’s Guide to Style and also a generous gift certificate for Macy’s.

We ordered salads and iced tea, with Tim instructing the waiter not to bring us any plastic after I had explained my blog and mission. The straws were a nice segue.

We talked some about style. I asked for suggestions. I told him I like to shop in thrift stores in an effort to conserve resources. So his suggestions were very general. He thought I should stay away from pastels, encouraged me to wear V-necks and to show off my “perfect hourglass figure.” Contrary to my fears that he’d criticize what I was wearing, he said he doesn’t believe in telling people what they should wear and that he just wants people to be who they really are.

And I think he meant it. Because we spent the meal just talking about our lives and interests, like two friends might. Tim shared some red carpet stories and revealed a few things about Heidi Klum (without makeup she looks like she’s 17) and himself (while writing his book, he enjoyed staying in his pajamas all day — just like me while blogging.)

I’m trying now to remember more specifics of the conversation, but I’m drawing a blank because really I’m just left with a feeling — a feeling of hope after the disillusionment I had experienced about the commercialization of the Blogher conference. A feeling of calm and gratitude for that one hour oasis. I remember being nervous up until the moment I met Tim. Once we sat down, my anxiety melted away and didn’t return until I got back to the chaos of the conference.

I need to chill out. I need to meditate and take it easy. I think I need some silence, actually. I do have people I want to see. Looking forward to possibly meeting FPF reader Clif Brown and blogger Jeanne from Life Less Plastic while I’m out here in Chicago. But mostly I want to relax and remember who I am after being bombarded for several days by sponsors’ reps paid to make me forget it.

I love him and I love you, so I'm so jazzed you had a meal and conversation.

I think you have fabulous style. I'm glad Tim told you about your hourglass figure.

What a special visit with Tim! Sounds like most all the comments I have read, say the same thing about the conference: Busy with social and networking but thin on content.
You sound like you made the best of it!

I can't wait to read your wrap-up post. I know you and Diane didn't leave with any crap, but the rest of us…well….I'm not proud of how it all went down, as I described in my post.

And on another note, it was FABULOUS to meet you in person.

Oh, how I wish I had known you were in Chicago. I would've loved to slice a couple minutes of time out of your, I'm sure, packed schedule. You have become one of my biggest heroes. All your efforts have not gone by without any notice!

It was nice getting to talk to you on Saturday night! I think you did a great job when you were called upon to talk during the Green session. :)

Yeah, let's take an aluminum water bottle, which most people carry in order to help the environment, and offer a vinyl sleeve to cover it with. Yeah, that's the ticket!

Beth, don't be disappointed by the appearance of corporate buy-out. The reason they are there is because you bloggers have a voice in our society that is being heard. Turn that frustration into a smile, knowing that some of you are making a difference in a way that is affecting them. What would FPF be about if not for the adversity? What you do matters – look at 'em squirm!!

Hi hon,
so glad that your meet n greet with Mr. Gunn was couture and not costume! I'm green with envy-
see… show off tha tperfect hourglass, babY!

Your description of lunch with Tim Gunn made me feel warm and cozy all over. I hope you'll have time and energy to meet Clif and tell us about him, along with everything else your faithful readers are patiently waiting to read. You rest good, girl.

I have been looking at pictures of the conference and have NOT been impressed. Bloggers wearing McDonald's bags on their heads? A guy dressed up like the Michelin man and people getting pics with him like he is Brad Pitt?? WTH??

Is this a professional conference or a group butt kissing session for corporations?

I hope Chicago was an enjoyable part of the conference for you. I have been very much enjoying living IN the city after years of the suburbs.

When do you head back to California?

Sadly, I didn't make it downtown, I was terribly sick.

I would love to hear about your experiences, both good and bad.

Ohhh so that's who Tim Gunn is. I know of him! Now I'm jealous you got to meet him and glad it was as rewarding as it turned out to be.

I'm so happy that you were able to find an hour of peace amidst your stress. It sounds like a wonderful dinner and conversation :)

I hope you find some peace during this time. :)

Still jealous and green with envy that you got to meet him. On the show, he really seemed genuine so I am glad to hear that he was just as genuine in person.

I'm sorry that the conference was such a stressing experience. I wouldn't have expected talking to a fashion consultant to be relaxing, that's great :)
I hope you can get as much rest and meditation as you need so that you can find and enjoy the good side of the conference (there must have been some good moments, right?)

Beth, how lovely. I'm so glad to hear it was such a pleasant experience for you. You go, girl, and take as many days off as you need.

I am glad to hear that Tim is actually classy and not just fake. I am also happy to hear that you had a constructive conversation rather than destructive. Such destruction is what I fear most about "makeovers" of all kinds (plastic, eco, organic, or fashion).