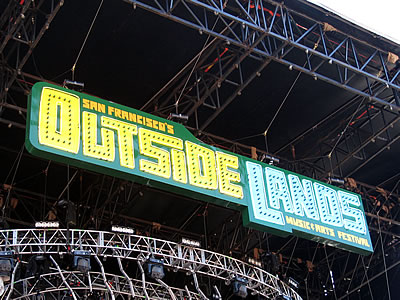 Don’t get me wrong. There was still a ton of plastic waste to be recycled from the Outside Lands Music Festival that took place this weekend in Golden Gate Park. 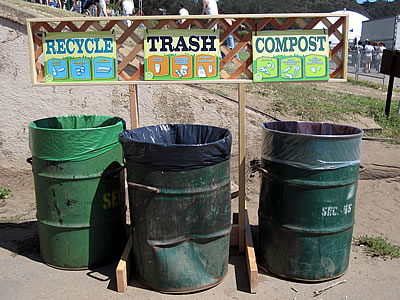 But less than last year. Because instead of providing only bottled water, the festival organizers listened to the feedback from last year’s attendees (like me!) and provided water refill stations as well. 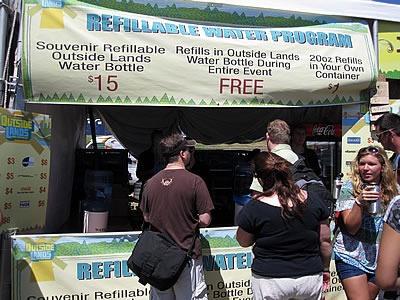 I was heartened to see the stations being used by many people who brought their own bottles. That said, the system was not all I could have wished for. True to a festival guard’s declaration to me last year that they had “no intention of providing free water to everyone,” Outside Lands brought in 5-gallon jugs of Arrowhead water and sold each 20-ounce refill for $1. Or if you bought an Outside Lands branded reusable bottle, refills were free throughout the festival. 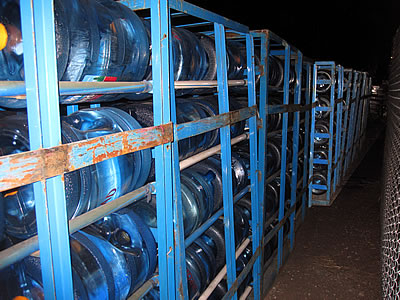 Now certainly, these jugs produce much less waste than individual plastic bottles because they are reused over and over again. One problem, though, is that they are made from polycarbonate, the kind of plastic that contains and can leach BPA. But an even bigger issue I have is with the idea of shipping in water from somewhere else and charging for it.

Now, I’d understand if the festival were taking place out in the desert where water is unavailable, but there IS potable water and water fountains throughout the park. Just not accessible in the fenced off festival area. I’m wondering if there isn’t a way to tap into the great San Francisco water already available to quench attendees’ thirst. And if there is, I’d love to see the City that leads the way in so many other areas require SF festival organizers to provide (or allow access to) free water at all times. Food is one thing. You could bring in some of your own. But water, I feel, should be a human right and available to anyone who needs it. Call me a socialist it you want. I don’t mind. :-)

And don’t think for a second there wasn’t a whole lot of plastic bottle waste generated for and by those who preferred not to carry their own bottle and drink plain H20. 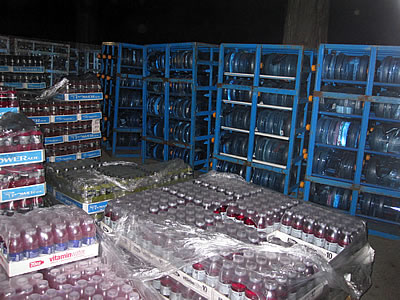 By the way, who allowed Whole Foods to come in and hawk all this plastic-wrapped crap food? Didn’t John Mackey himself say (among other inflamatory statements unrelated to this post) that Whole Foods was going to stop selling so much junk? Maybe I’m just bitter. Pirate’s Booty used to be my all-time favorite munchy food before I stopped buying plastic. Darn you, Whole Foods and Pirate’s Booty! 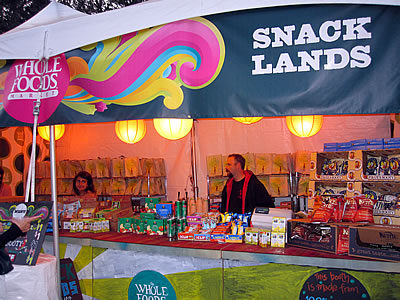 Are you wondering about the

that I bought specifically for this event so as to avoid the plastic wine “glasses”? It worked just great! 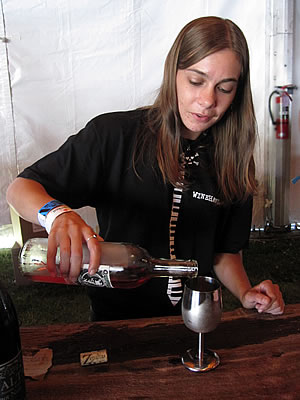 I was a little concerned about the size of the goblet because it seemed kinda small. But it turned out to be six ounces, larger than the amount being poured. And a little Googling this afternoon reveals that one official serving of wine is actually between 4 and 5 ounces. Who knew? (And how many of us are actually drinking several servings each time we pour ourselves a glass?

The goblet was a great conversation starter, by the way.

A few other things that rocked at Outside Lands this year:

Local moreTrees clothing company produces streetwear made from organic cotton, hemp, & recycled PET and designs and produces it all in the United States. 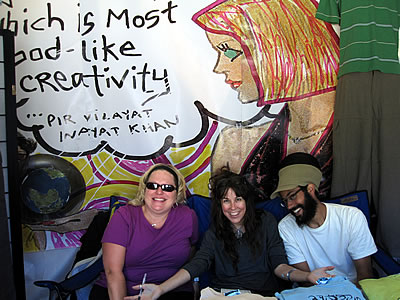 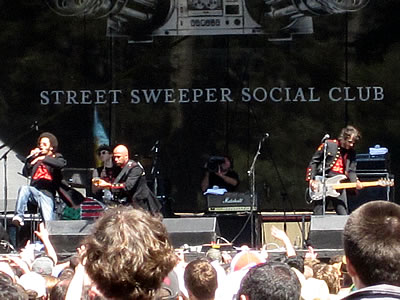 …thanks to my friend Eli Saddler who was working the Surfrider Booth in the EcoLands area and riding Kathleen Egan’s plastic wave. 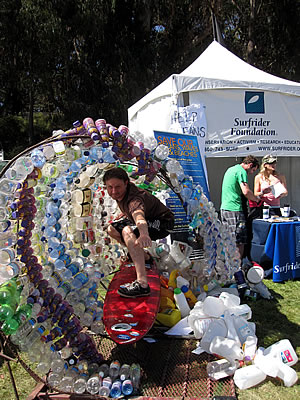 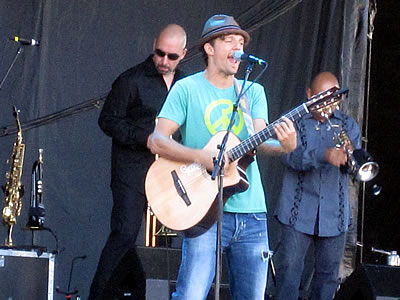 And the Black Eyed Peas were smokin’ hot! 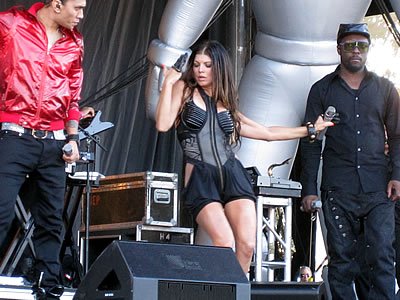 (I was afraid I’d damaged some discs in my back from jumping up and down for an hour, but it feels better today. Getting old sucks when I still feel like a teenager most of the time!) 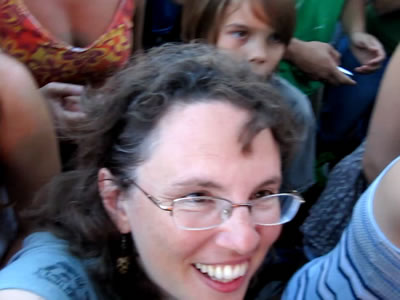 Hi! I just started reading your blog and I love it!! I am currently teaching in Thailand and I am finding it hard to cut the plastic here. (EVERYTHING is in plastic :( ) I have learned in Thai how to say , No plastic straw and No plastic bag. Now I just need to figure out how to get communicate to put the curries into my metal container. So far a women packaged the curry into a plastic bag…then sat the plastic bag in my container. Your blog has given me some tips that I am going to try. I can’t wait to read more!

Great post! I DO love your goblet you brought :)

I went to an Earth Day festival here in LA earlier this year. They offered free filtered water provided by a company that was there selling compostable cups for a couple of dollars and promoting their water filtration system. Many other vendors were selling various types of reusable bottles that you could then fill for free. The free water didn't stop people from selling other types of drinks though.

There are just too many fun things to do for environmentalists! I have to see what kind of concert parties are available in New England!
Glad the goblets worked out. I am actually going to order a natural scrub brush and toilet bowl brush from that company. So glad to have found them… I was searching for natural bristles and found many companies offering them bound to a plastic handle…(?)

San Francisco water comes from the mountains. According to the SFPUC, "the drinking water provided is among the purest in the world; and the system for delivering that water is almost entirely gravity fed, requiring almost no fossil fuel consumption to move water from the mountains to your tap."

Where does SF water come from?

Clif — the 5 gallon bottles are not #1 PET (like disposable bottles) but #7 PC (polycarbonate) which is harder and sturdier but also can leach BPA.

Still thinking about the issue of charging for water. Thinking… thinking…

Ok, my search for the logic of this brought me back to read a second time…

It seems the promoter decided that he/she could make more money by selling water directly this year while at the same time the change allowing folks to bring their own containers is a positive step from the environmental point of view.

That's win-win in the minds of those running the concert and makes it obvious that water is a big money-maker for whoever sells it.

If drinking fountain water (free) were available, ticket prices would go up because the show producers expect to make a certain amount of profit (no problem with that, I think we all agree).

To take the best view of it, you should take a big big drink of water at the public fountain before you go in and not drink while there. Nobody ever died of thirst in less than a couple of days so survival of even a long stay is guaranteed! You pay a lower ticket price because those who are buying the water are paying the extra money that you would otherwise have to pay in the ticket price. That makes it win-win for you.

PS: how come #1 plastic, in which groceries sell soda, says on the label "DO NOT REFILL", yet the large bottles of exactly the same #1 plastic (isn't it?) that you show in your pictures get refilled over and over again?

Looks like fun! Love the self portrait. I totally agree on the 'socialized' water bit. Hard sell when there's money to be made, though.

Very cool! I wish I could have gone with you! :)

I'm sure that all of the vendors have to pay a fee to the concert to be there/their sales help fund the concert and offset the ticket prices. If they provided free water, it's possible that people wouldn't patronize the other drink vendors and the concert wouldn't make enough money to cover the permit, performers, utilities, workers,etc. If that's the case, I don't think charging a dollar to refill your own water bottle is too much to ask. By offering refillable water bottles for sale w/ free water refills, it might encourage someone to buy one and get into the reusable water bottle habit.

If you filled a water bottle from your own tap YOU'D have to pay a (admittedly very small) price, and I suspect any festival giving water away to thousands of people would have to pay some kind of fee. They'd either have to recoup the money or use no-cost water as a way to promote their benevolence to the community.

Do they charge for toilets as well? How about the air that attendees breathe? So how is water different?

It's amazing they brought in all the water (at an expense they have to recover) when they could have worked a deal with the city to allow SF tap water within the site, as simple as opening a fire hydrant into a hose that can be turned off and on. The city could even use the event to promote the quality and safety of its water: "Drink all you like, then enjoy it at home, too – only 1 penny a gallon!" I'm not sure about the one penny but it can't be much more than that.

Street Sweeper Social Club opened for Nine Inch Nails and Jane's Addiction when we saw them in Kansas City a few months ago. I wasn't familiar with them before but really enjoyed their music. Looks like you had a great time. :)

I've noticed fewer and fewer public drinking fountains in cities over the last 20 years or so (and you reckon YOU'RE getting old!).

Not only that, but the few that do exist seem to be less regularly serviced and maintained.

I'm starting to think I need to lobby council harder, for bette service of the fountains we have, and push for more public drinking fountains.

I guess that makes me a socialist too, because access to safe tap water should be a right for all people…and not just those in wealthy countries.

Good to see changes for the positive at this event though, if only small ones.

It sounds like some progress was made, but I agree that allowing access to free tap water should be required. ESPECIALLY if the facility is already set up for it.

And I used to love Pirate's Booty, too, as did my preschooler. So sad that I can't buy it in good conscience anymore.