Well, those worries melted away as soon as I met the warm and totally down to earth Sue. And the education started before we even got to the classroom. After picking me up at a bus stop near Benicia Middle School, Sue showed me where she and many residents of the area had gathered to collect trash during Saturday’s Coastal Cleanup. As we drove along, she stopped to examine some of the day’s trash collection. 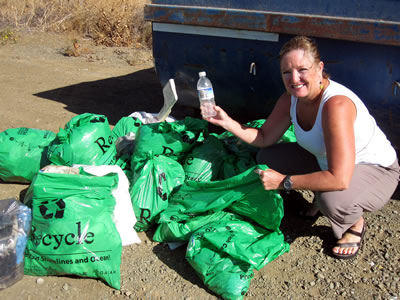 This trash was not collected near the beach but further inland, proof, Sue believes, that the message about litter’s effects on the ocean is getting through. Benicia’s waterfront along the Carquinez Strait is actually pretty clean.

The Carquinez Strait, in the words of Sue to a class of third graders, is the “ponytail of the mermaid” that is the San Francisco Bay. Do you see it? 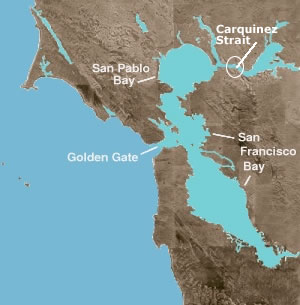 It was a beautiful day in Benicia, CA. 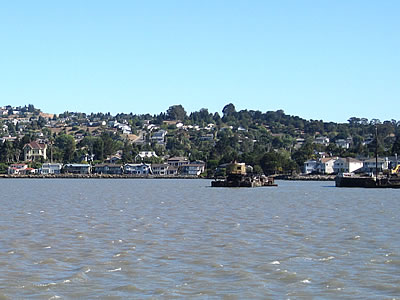 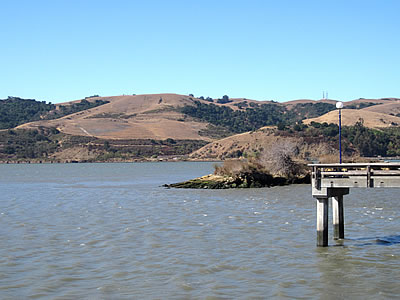 Our first group was a class of eighth graders at Benicia Middle School. Sue presented a slide show about Laysan albatross and managed to interest these restless California students in the plight of creatures thousands of miles away. They were especially captivated by a video showing the albatrosses feeding their chicks and performing their mating dance. (There are many more such videos on YouTube but I’m hoping to find a copy of the one Sue has, which is so much fun that the kids asked to see it a second time.) 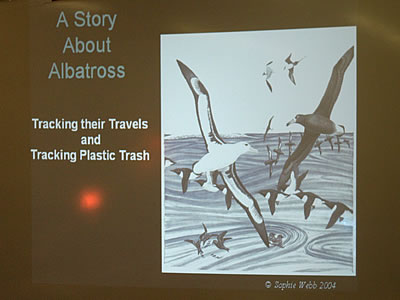 Showing the actual stomach contents of some of these birds was the real kicker. As part of her regular program, Sue routinely has students dissect the albatross boluses and analyze what’s inside. What’s a bolus? Basically, what the birds throw up after digesting all that they can. See all the plastic? 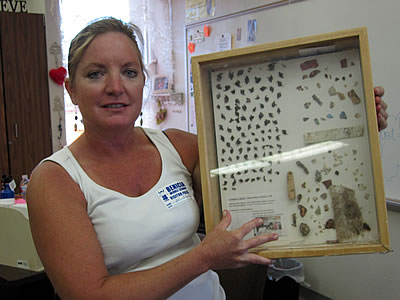 This bird had ingested lava rock and plastic bottle caps. Trouble is, it’s not just the adult birds consuming plastic, but the baby for whom the mother has collected it in the first place. She only lays one egg per year, if that, and leaves it for up to two weeks to hunt for food floating near the surface of the ocean. Upon returning to Midway, she feeds her chick with what she has swallowed. And more and more, that “food” turns out to be plastic. 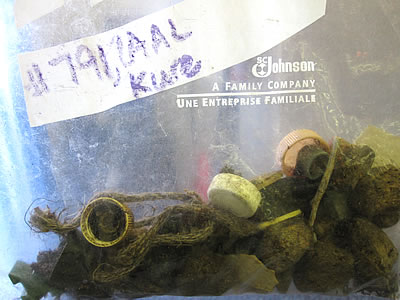 After showing the problems with plastic, it was my turn to share a few solutions. And as soon as I stood up and started asking questions of the kids, I knew I’d had nothing to worry about. Following up on Sue’s information, I asked, “What’s another word for marine debris?”

Answer: Trash in the ocean.

Questions: What percentage of that floating trash is plastic?

Question: And where does most of it come from? Ships out at sea?

Answer: No, right here on land from storm runoff, from us, our own plastic use and litter.

So I pulled out my bag of tricks and showed them some alternatives, like stainless steel water bottle, travel mug, stainless containers, jars I use to buy in bulk, glass drinking straw, etc. 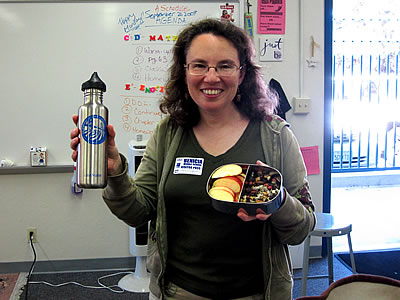 The demonstration went well, and even better at our next stop: a class of third graders at Robert Semple Elementary School, where Sue lead them in a truly creative and interactive exercise. First, she presented a bowl of beautiful, clear water… 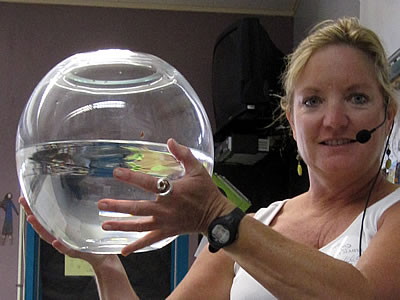 And then proceeded to lead them through the story of the San Francisco Bay, from creation through today. To each child (all 22 of them) she handed a labeled bag with something inside. As we got to that child’s part in the story, (s)he would come up and empty the contents into the bowl.

We went from sediment (rocks) and salt marsh (leaves) and shellmounds left by Native Americans (shells) to chemicals from factories (food coloring), litter (plastic bottle caps and other trash) and run off (cinnamon, soap, and more food coloring). The most interesting to me was a plastic octopus representing ship ballast, the water from the bottom of the ship that would be released after the ship had unloaded its cargo, releasing non-native species of sea life. That one was new to me.

Would you drink or swim in this? 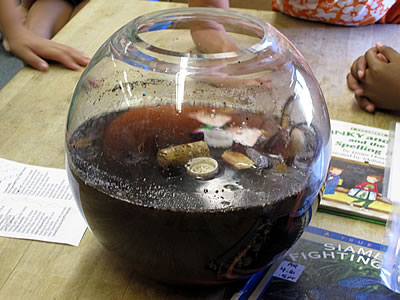 Fortunately, this class took place right before recess, because the payoff came afterwards as a group of girls stuck around to ask me where they could get the reusable things I’d shown them and practiced opening and restuffing a ChicoBag reusable bag. One little girl in particular looked at me with utter sincerity and insisted, “I want to help the environment! I really, really want to!”

I could have cried. What if every single class had just one child with such conviction? Would that be enough to change the world?

Later that night, I did cry, during the international screening of The Age of Stupid. More on that in a future post.

For now, what do you think is the best way to reach young people? And can they in turn reach out to the “adults” in their lives? I know this is an old post but I found it as I prepare to talk with students (in Istanbul) about the same matter. I really appreciate your heart felt dedication to this subject and the info and experience that you have compiled here.

I still remember passing around the "good" lung and the "smoker's" lung around the classroom during my gradeschool days so I hope the fishbowl exercise will have the same effect. What a creative way to teach little ones about the impact of trash on the ocean.

You are such an inspiration everyday! :)

OMG, that little girl was SO ME at that age!! I was obsessed with helping the environment. :D

I think the best way to reach young people and make sure they care about the environment is to get them outside. So many kids never get outside and enjoy nature. Schools can do this but they need more support. Parents and friends can do also do it. Take a kid outside and nurture the respect and love of nature!

Beth, it sounds like you were a great teacher!

Beth, as you know I teach my kids to recycle in class, and talk about reducing their waste as well. This year's class is very motivated to recycle in school. The home impact is smaller, but some of the parents have been asking me questions. I believe I am making a (small) impact on them! The best part: Last week a parent of one of my students from LAST YEAR dropped off a load of bottle caps for me to recycle. Since these are not recyclable with the regular plastics here, I send them off separately to another company that… Read more »

The beauty of informing the young is that they can have a full lifetime impact, compared to our shorter timescale of adult awakening.

They will obviously do things their way, as is the reality of succeeding generations.

Reading about your albatrosses really hit home for me, because here in Dunedin we are home to the world's only mainland breeding albatross colony, and the displays about plastic rubbish that the birds are eating and feeding their chicks are horrific.

Our albatrosses are magnificent – get a good day and they'll swoop 20 metres or less over your head! They're HUGE!

We need to stop manufacturing and using disposable and unneccesary plastics now – all of it.

What a great day Beth! Welcome to my world! (-; There are a LOT of those kids who really want to help change the world, and they are really inspiring. My kids all still love Harry Potter, so they love it when I tell them that if they are humongous tree-hugging geeks like me, they can join Norton's Army (like Dumbledore's Army) and save the world from the evil forces of overconsumption. They think its funny, and super-cool in a really nerdy way. Love those kids! (-:

Awesome!!! Any chance you guys might want to come to Connecticut and present for my students?

I think that reaching out to kids is very effective on two levels. First, they can change their parents' minds. If my 4-year-old were expressing environmental concerns I would at least try to listen. But second, these kids have a whole lifetime of living ahead of them. The sooner they mend their ways, the greater the impact. Things that are work for us will be second nature to them. It's like recycling. I still think of it as an environmental action. But when I was a Brownie leader the 7-year-olds didn't even think of it as helping the planet. It's… Read more »

Sadly, the places I know I can always find the most litter are the routes kids take to and from school. Then, aiding the distribution of their deposits, the guys who do the lawns come along with mowers and rather than picking up the student litter, run right over it and break it up into finer pieces! So we have a double dose of carelessness. As others have said, the parents are the most important influence. Kids see parents ignore the world around them and they do likewise. On the subject of the plastic and the birds – it's good… Read more »

Great story and a great project!

Brilliant demonstrations in that classroom. Wish we could send you everywhere!

What a great story. This seems like a perfect way to reach kids. @Nollij, I agree that TV is often a bad influence, but it also seems like entertainment can potentially be another good way to share stories like this.

I love this story! Our local elementary school has been working with the county Wildlife preserve on a demonstration that is similar to this. I hope ours is just as successful!

One of my 4 y.o. nieces b-day presents [9/17] was a reusuable bag. It is pink and has bunnies on it. Hit em young. And use furry woodland creatures. That's the key.

Beth, I believe it's gotta come from the parents AND the education system. Kids are less likely to care about recycling, reducing plastic waste, using less energy by riding bikes, walking and taking public transportation if their parents are the role model, and above all, all of it needs to start early when they still think what you're doing is "cool" and they want to be like you! More & more I've come to realize that TV (more than anything else) is what turns kids into "consumers" so I shut off our cable. I don't miss it & neither does… Read more »