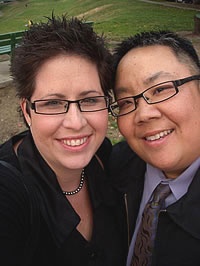 Have you ever had so much fun that you completely forgot to take pictures? That’s what happens when the day is all about great food, friends, and silly games. Our friends Red & Jen (that’s them on the left) hosted a Thanksgiving potluck, and you know what? I didn’t see a lick of plastic. Okay, maybe I just wasn’t looking for it. Because sometimes I just have to turn off my “Fake Plastic Fish” brain and turn on my “connecting with others and forgetting about judgments” brain. I kinda wish that part of my gray matter would light up more often.

So here are a few notes with only a few pictures (which were actually taken by Jen and sent to me the next day!)

1) Michael and I got up early Thanksgiving morning and cooked butternut squash pie with a gluten-free pecan crust, baked yams (w/ butter, brown sugar, & lemon juice), and Autumn Harvest Salad with Persimmons. I got a little frantic time-wise towards the end. I should have made the pie crust the day before and let it cool down because it burned after I filled it and cooked it again while it was still hot.

2) Our contribution was plastic-free except for the cap of the milk bottle used for the pie filling.

3) Did you know that butternut squash can be substituted for pumpkin and tastes just the same? In fact, at the farmer’s market, we were told that often canned pumpkin is actually butternut squash. Of course, we don’t use canned pumpkin, opting for actual pumpkin. So the squash was way easier to prepare as well.

4) Each attendee brought one or more dishes in reusable, non-plastic containers. In fact, Michael and I were probably the only ones who brought plastic –schlepping two insulated food carriers on BART across the Bay. Of course, they were food carriers we’ve had for years. And why not use them?

5) Jen laid out all reusable dishes, glasses, utensils, and cloth bandanas that she uses as napkins. 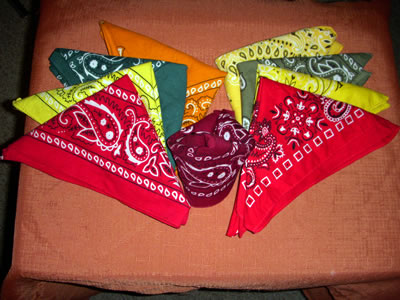 6) Jen also proudly displayed her own water bottle cozy, inspired after my travel mug debacle. One tube sock and a safety pin. What a gal. 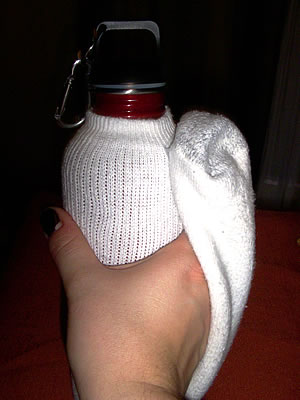 7) Jen also showed her handiwork creating a glamorous outfit for Tiger Boo, the best-dressed lady at the party. 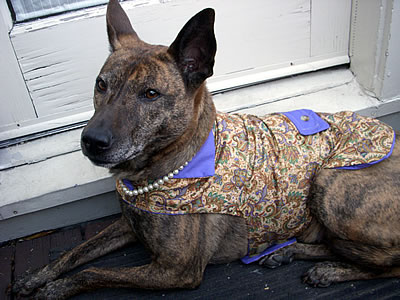 8) Between dinner and dessert, we played Apples to Apples, which is a scream even though the card decks come wrapped in plastic. Okay, I guess I did notice some plastic. :-)

9) We brought home leftovers in the same dishes we’d brought with us. No plastic wrap required.

Once again, no camera. Not only did I not buy anything, I turned off my computer, cell phone, television, and attempted to live without lights for the entire day. I didn’t leave the house for fear of being tempted into buying something. And was I bored? No way.

First of all, I had Soots and Arya to entertain me. (Photo taken the next day. No camera allowed either.) 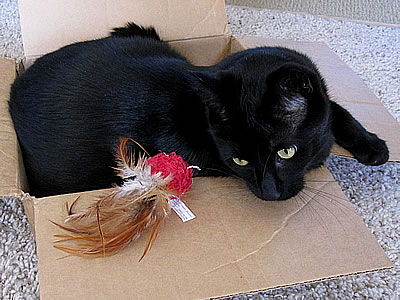 I got a lot of chores done. Chores and projects that get ignored when I’m glued to the computer. And I cleaned up the pile of papers and boxes by my desk. Yeah, the one I wrote about earlier this year. 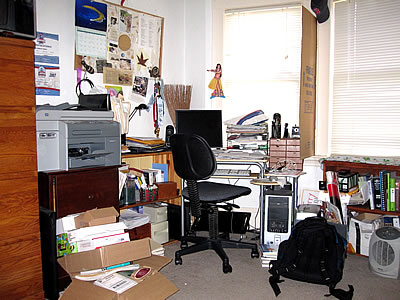 That night, I lit local beeswax candles and thought about how I’d like to have a day like this once a week. Maybe that’s unrealistic. But maybe not. We’ll see. 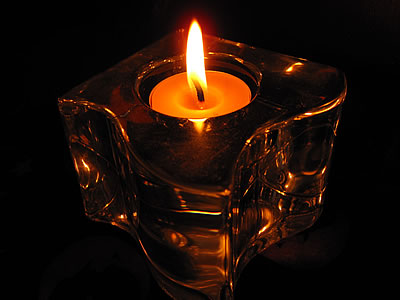 I realize I’ve been writing about how Buy Nothing Day should extend to the rest of the year. But Nick Aster from Triple Pundit makes a good point. In his post, “Black Friday? Buy Nothing Day? How About Buy Something Responsible Day?” Nick writes:

…the idea is to make a concerted effort to encourage spending some extra money the day after Thanksgiving at businesses who are making sustainable efforts — be they sourcing and employing locally, producing ecologically minded goods, or just making an honest effort at reducing their footprint on the earth…. The point is to actively stimulate a new, greener economy a “BUYcott” could accomplish much more than a “BOYcott.”

And that’s exactly what I did:

Plus, I took several bags of stuff to Goodwill.

All this shopping was via bicycle of course, except for several pairs of organic cotton underwear from PACT, the only things I bought online, and believe me — I need them!

So what do you think? As I wrote in my post about plastic-free binders, I think we need both reducing overall consumption and also supporting sustainable businesses. The two don’t have to be mutually exclusive. Although, at this point, I think I’m pretty much done with discretionary shopping for another year!

I know you posted this 2 months ago, but I wanted to comment on your buy nothing day. The way you practiced it reminded me a lot of a traditional Shabbot where no commerce, no work, no technology for a whole day brings the whole family together. I’m not Jewish but I’ve always been enamored by a lot of the traditions of Judaism, including Shabbot, which are ways for people and families to slow down and appreciate life more. I’ve always thought about using some of the traditions, like a weekly day off from the world, a monthly cleansing bath after my time of the month, eating quality foods and celebrating important milestones in life, only in a more secular way, since I’m not a part of that culture. So, I just wanted to say right on about wanting that weekly pause from life.

To encourage you in your thought to live with out lights for a day – well, if the day is bright enough you don’t need lights for most of it any way :-)

My sister does this – every Saturday night – for her it is a way to slow down and reflect on the good that happened during the week, plan for the week ahead, and to (as a Christian) calm herself and prepare for church on Sunday.

Any way – I think its neat that she purposefully sets aside time to live without, and I can see that its a valuable time to her, so I wanted to encourage you with her story.

PS. Apples to Apples is a fun game! I love that it works so well with people of different ages :-)

Can’t wait to hear about the cosmetics! That’s definitely one area of my life that could use some eco-improvement.

Great to (finally?) hear you on the radio! I thought your points were very well articulated, I only wish they’d spent some actual time discussing what you had to say.

You answered my question…I was wondering what was actually was canned pumpkin since few people seem to actually eat pumpkin from a pumpkin (I made pie and pancakes from my pumpkin).

The sock with a safety pin is so brilliant I’m going to share my use what you have invention from last night. I took an old glasses case, which I’ve never actually used for glasses, and used it as a container for a set of eating utensils. I’m so excited to finally have a knife, spoon and a fork in my purse at the same time and I won’t have to dig for them. Now I’m going to hunt for a bandana to add in my purse for a napkin. I know there’s one around here somewhere.

Hi Beth! Your Thanksgiving sounds great! :) Plus you always manage to find the coolest products! Where do you hear about this stuff? I will definately check out the cosmetics line. As hard as I try to be eco-conscious I am still very vain and love all beauty products! :)

I failed miserably on buy nothing day- I bought a book for a gift at a bookstore. Albeit a local independant Bookstore. And I bought Martin’s present- An Acoustical Guitar– albeit used from a pawn shop!

We played Apples to Apples this weekend too! It is totally a scream. We didn’t buy anything on Friday…instead we went hiking and then shared coffee and no bake cookies with good friends.

ohai what a handsome couple ;-)
And my Tiger boo is famous!

A couple of thoughts – do a little cropping of that picture of the bandanas and you will have a work of art suitable for framing!

On the clutter – have you considered setting the place ablaze, not only would you be starting with a blank slate (desk) but think of the insurance payoff as well! I’ll leave it to you to get the kitties out and warn your neighbors in some non-obvious way…

This year, I decided to try something new and made Tofurkey for Thanksgiving. We aren’t vegetarians, but like trying new and different foods. While the meal was meat free, it was almost plastic free – the Tofurkey was in a plastic wrapper and came with vegetarian gravy in a plastic tub which was tasty and necessary.

Nice post! I’m rolling down to the market right now to do the same. lunchtime!