Today is World Oceans Day. It’s also, appropriately, No Plastic Day. The ocean is magnificent and yet fragile. In awe of the ocean’s vastness, we humans discard our waste, imagining that the sea will wash away the things we don’t want. We believe that oil, plastics, mercury, fertilizers, pesticides will all simply disappear. And yet, the living systems that depend on the ocean (including humans) are coming to learn that while the ocean may be vast, it is also finite. Can you imagine a world without oceans? Several artists want us to do just that.

The Plastic Century artists set up an installation at the SF Academy of Sciences last week asking visitors to think about the rise of plastics in the world’s oceans from 1910, the year Jacques Cousteau was born, to 2030, an imaginary time when plastic has completely filled up the ocean. Setting up 4 water coolers representing the years 1910, 1960, 2010, and 2030, they ask if you would dare to drink. The plastic in the coolers is both sad and beautiful, isn’t it? 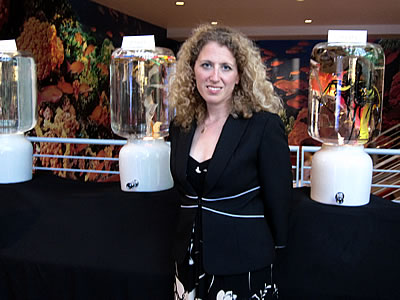 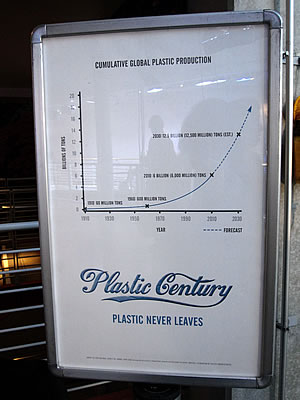 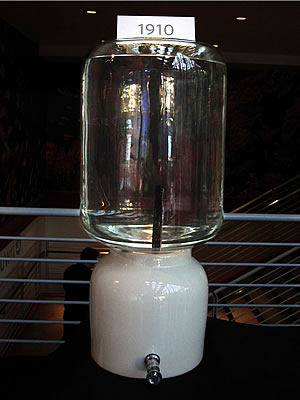 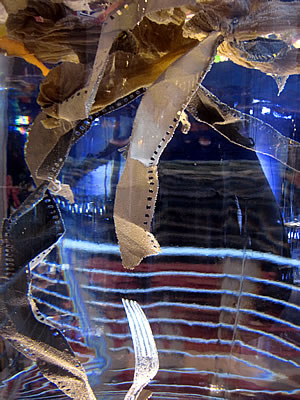 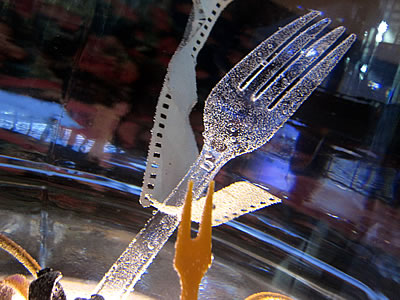 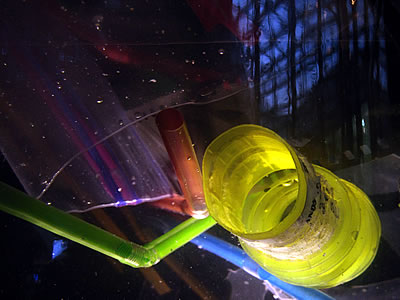 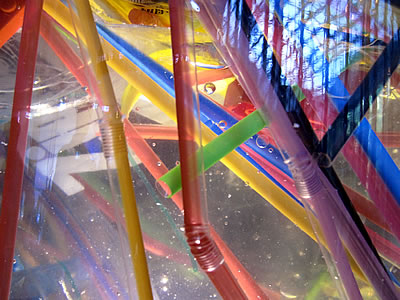 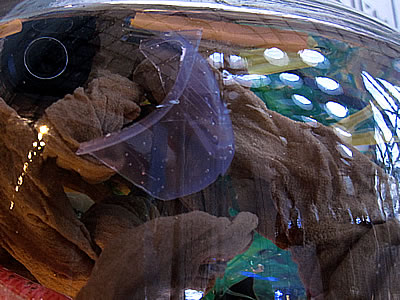 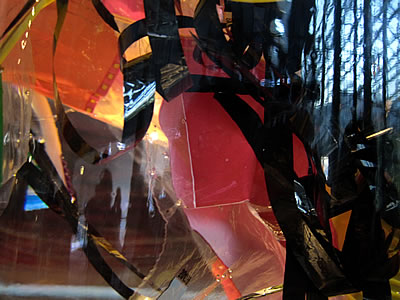 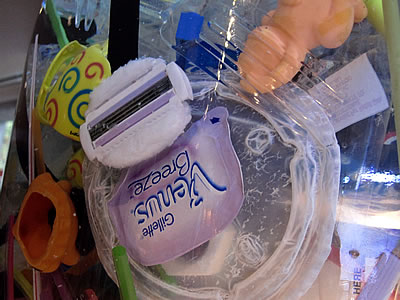 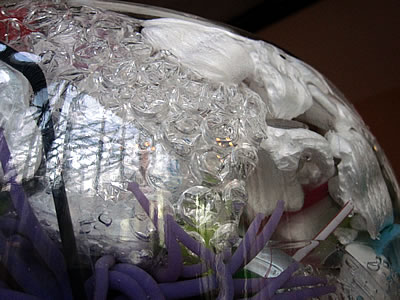 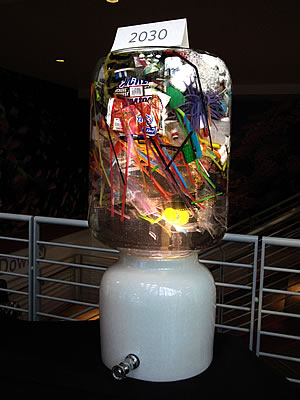 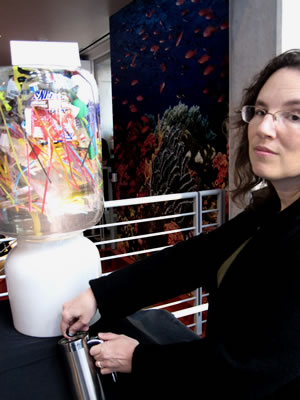 Marine biologist Wallace J. Nichols teamed up with sound artist Halsey Burgund to create Ocean Voices, a haunting audio collage of music and words telling a story about the ocean. Ocean Voices premiered at the SF Academy of Sciences last Thursday night, where images were projected on the walls of the Planetarium and sounds were generated by live musicians. Here is just taste:

You can still add your own voice, and the voices of children you know, to the project. All you need is a computer with a microphone.

Working with children at the Benjamin Franklin International School Elementary in Barcelona, Spain, artist Dianna Cohen created a huge mural out of plastic bags depicting the effects of plastic in the ocean. Watch and listen.

And finally, following up on his wildly successful video about going green, Puglet returns with a video about what we can do to protect the ocean.

What are you doing today? Thank you everyone for the good ideas!
The duffel bag idea made me think of all the unused old suitcases in my parents basement, I might as well just fill those up!
Charity shops is a good idea too, and I’m going to check out those boxes on etsy, it might be nice for keeping books!

As far as storage goes, why not check out freecycle or gumtree.com or charity shops in your local area? You should be able to find something to suit your purpose, you’ll be able to stop plastics from going to landfill and give it a second lease on life.

Or, for clothing storage, we can do like my mother and use a cedar chest. Or for something more convenient how about large duffel bags you can buy handmade plastic free ones or if you need more durable buy handmade recycled billboard or sailcloth duffel bags. Or even vintage luggage.

The only thing I can find for storage is “metal file boxs” on etsy.com to replace plastic storage bins. They are not as big (12x10x10) but at least they are not plastic!

Beth,
Do you have a suggestion for someone who doesn’t have storage bins yet?
I’ll be moving some stuff to my parents basement, I’m afraid the cardboard boxes won’t keep up and I don’t feel like buying the plastic bins…
Greets from Belgium (you’re inspiring us over here too!)

Wow. Extremely honored that Blue Pug is in such great company :) The waterbottle art is particularly amazing.

Thank you for this post, and this reminder. I wrote about plastic in the ocean for World Oceans Day, too, and will go back and link to this post. http://chezsven.blogspot.com/2010/06/ocean-lovers-unite.html . I cannot watch the videos until my guests wake up. Simply cannot forget the image of the seagull eating the plastic bag which I saw here in a video. Have made a recommendation to the Economic Development Committee of my town that it go green and get plastic bags out of our lives. Just read Slow Death by Rubber Duck and recommend it to everyone. Your blog is so important in raising awareness of the horror of plastic choking our world. Do you know if that exhibit is going to travel around the country??

I found a museum made of beach rubbish (16 tons of it I think) It was on treehugger. Might be worth a look :)

Thanks Beth for clarifying I get that, good thoughts.

I thought you’d like to know that I nominated you for Best blogger, Best hometown hero, Best homegrown Internet phenomenon, and Best local activist on the East Bay Express Best of the East Bay 2010 survey. You’re so inspirational that I couldn’t resist. ^_^

Here is a link to a video of where some of that plastic ends up when it does not get used as art or recycled
https://www.youtube.com/watch?v=Dc0a4uuI1gY

And some other wonderful artists that are working with marine debris
Andrew McNaughton – http://www.andrew-mcnaughton.com/
Pam Longobardi –
Michelle Lougee – https://www.mlougee.com/

Hi Suzanne. I’m guessing you already have a few of those Rubbermaid containers. If I were you, I’d just continue using what you already have. It’s not like you’re eating out of them. I use a few of those containers myself — ones that I already had before going plastic-free. For me, plastic-free means no new plastic, but it doesn’t prohibit using what I have. In fact, reuse is encouraged.

You make me question all plastic, and I love you for it.

Keep on reminding us, and giving great alternatives.

Have you found a good alternative to those giant rubbermaids for storage? I really like those, but won’t be buying anymore. There are some things that just need to be stored and simple cardboard discolors clothing that I pass from one boy to the next.
Thanks