My friend Axelle, super minimalist and organizer extraordinaire, sent me an email a few days ago that was so funny I would have snorted milk out my nose if I’d been drinking milk in the first place.  Axelle doesn’t have a blog–or, she does, but she hasn’t written anything in it since 2010.  So I asked if I could share it here, since  it’s related to my favorite way to reduce plastic use:  reducing consumption of everything.

How do Bill and Melinda Gates, two busy bees, keep overwhelm from knocking at their kitchen door?

How do Brad ‘n’ Angie keep it together with their 6 or 7 kids and the dish washing that’s generated by this big, happy family?

How do Donald Trump and the missus maintain their serene bedroom closet and kitchen home-style?

The Obamas:  What’s the secret to their success in keeping a tidy White House?

“Two changes of bedding and two bath towels and washcloths allowed for each household member!” they all shout. 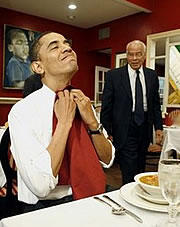 The Obamas are big entertainers.  “It comes with the job,” Michelle laughs.  Michelle and hubby Barack have no need for fancy, old-fashioned White House dinnerware that’s been out of style for over a hundred years. “We followed the advice of Axelle, who recently became our Home Organization Dictator, and got rid of all that stuff.  You wouldn’t believe the space that opened up in the kitchen cupboards!”

Fortier advised the Obamas to add at the bottom of invitations to White House dinners a request to BYO table-and-flatware, including wine/beer/water glass and coffee/tea  mug.  “We have a lot of guests who live out of town, not to mention who live out of the country altogether.  A lot of those people aren’t always able to bring their own eating utensils.  We used to tell them to get some disposables at a supermarket or a Walmart.  When Axelle found out, she put a stop to that.  Now, we’re green and we tell our guests to get used dinner things at a secondhand store.”

If you’re single, solitary, and sad about it, Fortier reminds you that your life is easier than that of these happy married folks because you can keep a smaller dish drainer on your counter top.

“Of course, no excess dishes means no dishes ever piling up on the counter, waiting to be washed,” snaps Fortier.”  Three changes of underwear, two pairs of jeans, 3 changes of sox and a couple of t-shirts is all anyone needs,” says Fortier.  “If you can get truly minimalist about your clothing, you can eliminate a dirty-clothes hamper, thereby opening up more space in your home.”  A sweatshirt or two takes the place of  “all those sweaters that hog valuable drawer space,” and, she continues, “A heavy-gauge, black plastic trash bag with a couple of slits makes a great California-style raincoat.  When you’re not using it, you fold it up and stick it in a drawer that was once stuffed with sweaters.”

The Trumps, used to a glittering lifestyle, find the simplicity of a home with just a few dishes and a few articles of clothing a refreshing change.  “We love to come here to this apartment  Axelle organized for us and inhale the unused space,” says Donald Trump.  His wife agrees.  “We come over at least once every year to see how we could be living. We’re not quite ready to live up to Axelle Fortier’s standards, and we know this causes her a great deal of frustration,” says the former neonatal brain and toe surgeon who is busy with her own budding interior design business.  “It’s not easy to live up to the perfection of this fabulously talented dictator of organization who wants only for everyone to live her way. “

Well, they’re all capitalists, (and Obama and the Gates’ are imperialists). So none of them give two shits about the environment.

Before the advent of industrial design, cabinet makers were responsible for the conception and the production of any piece of furniture. In the last half of the 18th century, cabinet makers such as Thomas Sheraton, Thomas Chippendale and George Hepplewhite also published books of furniture forms. These books were compendiums of their designs and those of other cabinet makers.

I haven’t commented in a long time but still read your blog. A friend showed me this song and since it’s all about plastic and doing without it for the grocery shopping, I thought you had to see this.

Yes! This is one of my favorite anti-plastic videos. It’s addictive, actually.

Beth, thank you for relieving me of my gullible nature. I also read this post thinking it was all the truth. Wouldn’t it be great to see all these foreign dictators coming out of a thrift shop with harvest gold goblets and dainty floral dishes? Perhaps world peace would be at hand.

You may laugh, but many things don’t need detergent if rinsed right away. Certainly cooking utensils don’t, heat from cooking is going to take care of any issues.

@MarkDuncan Not laughing. Well, am, but not about rinsing utensils w/o soap. Agree.

I gotta tell you, I had to read to the part about the trash bag rain coat to realize this was a spoof. My initial thought was, “Yeah, so what?” I mean, she pretty much described my wardrobe, doesn’t everyone dress like that?

No, actually everyone doesn’t dress like that. But even though this was a funny post, I have to tell you that Axelle really does practice what she preaches.

I laughed so much I peed myself

this is great! i literally laughed out loud! thanks for sharing!

For those who could use them, here are the Three Emergency Essentials to making your home look good in a hurry:

Clear floors and surfaces (kitchen counters, table tops, desktop, bedroom bureaus) of everything that’s not essential and hide it.

Clean mirrors and windows or close the drapes/curtains

If you have any time left, clean/polish anything that’s shiny (doorknobs, drawer pulls, brushed aluminum lamps, and brass or copper) knick-knacks. Objects that are meant to be shiny that are actually shiny make great taking the eye off housekeeping “flaws”.

I’ve picked up these guaranteed-to-work tips from Peg Bracken to Heloise to Flylady for 45 years. In the 90’s I was seduced by photo’s in M. Stewart’s LIVING magazine, wondering how I could get that same gauzy effect that made absolutely anything look perfect until I figured out it was airbrushing.

How do we get tips from Axelle? I can’t find her online.

Love this!! Totally funny! Thanks for sharing:)

I believe it should be required for all households. No choices. My chickens love it.

Really? White House guests asked to bring their own place setting? I belong to a group that has an annual potluck dinner where we ask guests to bring their own, but I find it hard to believe the White House does it. What is done with the second hand dishes purchased for the occasion? I like Beth’s approach of allowing us to choose our comfort level on this site rather than demanding perfection from everyone.

Pat, it’s a joke! The whole thing is totally tongue in cheek. Read my intro again. :-)