You’ve probably already heard about the Japanese tsunami debris making its way across the ocean and the 66-foot long dock that washed ashore on the Oregon coast last week.  (According to NOAA, the debris is unlikely to be radioactive, by the way.) 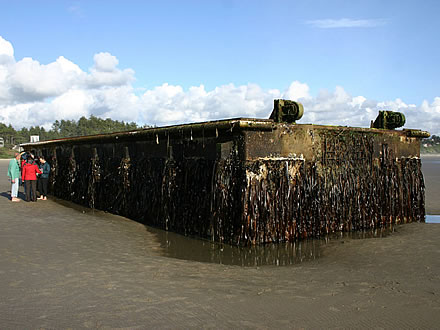 The dock is a story in and of itself, but what made me realize it was also a story about plastic was the Oregon Parks and Recreation Department’s June 8 press release requesting bids for removal of the dock:

Salem, OR — The Oregon Parks and Recreation Department has reviewed options for removing the tsunami debris dock at Agate Beach. The department originally intended to pursue either of two options — demolition in place, or towing it off the beach to the nearby Port of Newport — but has since discovered the range of costs for these options overlaps. The reinforced concrete dock contains a large amount of styrofoam, making clean demolition a challenge and increasing the costs for that option.

Can you imagine the mess from demolition of that much Styrofoam? Lots of tiny pieces of polystyrene let loose into the environment. I can imagine it because, in fact, I see it at the Green Festival every year.

Eco-Struction is a company that designs and builds structures using Reclaimed Polystyrene ICF-Insulated Concrete Form Block. They show the product at the Green Festival every year. 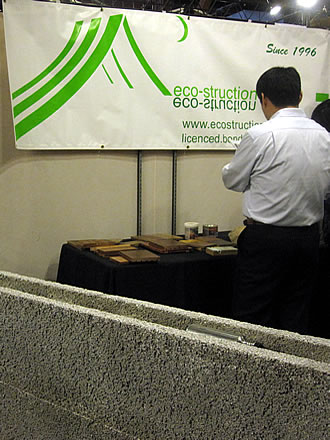 You might think this is a great way to recycle Styrofoam, but check this out. Every single year, I can’t help noticing the bits of flaked off polystyrene foam on the floor surrounding the demo. And every year, I feel compelled to take pictures of it. 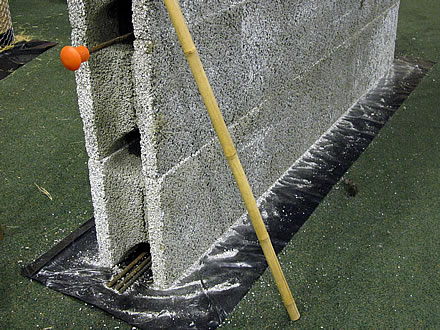 These plastic particles are getting into the environment even before construction is completed. I assume that the finished structure will be coated so that the foam will not continue to flake off. But what happens to all that polystyrene when the building reaches the end of its life? Nothing lasts forever. Not a house or a building or even a 66-foot dock.

A Problem With Recycling Plastic

I’ve discussed many of the drawbacks to plastic recycling on this blog and in my book. One thing to keep in mind is that plastic recycling is always downcycling. Plastic cannot be recycled an unlimited number of times because each time, the molecules lose strength. That same thing happens with a material like paper, but paper will finally biodegrade and return to the earth when it reaches the point where it can no longer be recycled. But those molecules of plastic will remain in the environment for a very long time, possibly releasing toxic chemicals and accumulating in the soil and water.

I’m not saying that we shouldn’t recycle plastic or that we shouldn’t find uses for the plastic that’s already here.  But what I am saying is that the only real, sustainable solution to the plastic pollution problem is to stop creating so much of it in the first place.  And to really consider what’s going to happen to all those recycled styrofoam buildings or recycled bottle carpets and polar fleece (which also sheds miscroplastics into the environment) or recycled bag decking material.  Most of these things do not get further recycled and yet will linger on the planet for a very long time. Using these materials is not worth, not even an eco friendly ideas. It will only give is headache fixing even how matter we take control of it, and it also a waste that toxic to the environment.

Leave the dock there, It will become a tourist attraction :) Maybe it could be used as an environmental teaching tool as well,

My sister is an interior designer for the company which designs Target. She has started to feel guilt for being involved in tearing down perfectly fine structures, only to rebuild them with “green material” to make something a bit more trendy for the current time. Do you think some representatives of Ecostruction may feel the same way? You could interview/poke and prod them next year about their opinions on the matter.

What goes around comes around — the globe.

When I do beach cleanups, I see lots of pieces of Styrofoam. Once it breaks down to the size of fish egg, it’s impossible to pick it up while animals in the ocean easily mistake it for food.
A research ship (Algalita & 5Gyres) has just departed from Japan and is heading Maui right now to research the Tsunami debris.
Please join my group for the online educational couse to read the reports from the voyage.
You can send the crew your comments and questions!
Check this event page: https://www.facebook.com/events/363422623715733/
or just email dance4oceans@gmail.com if you don’t do Facebook.
It’s FREE and fun to follow the research ship online.

Picked up over 900 pieces of styrofoam from one end of a beach once – all within a few square feet. Went back six months later and the same little area was covered in the stuff again.

Took a walk on the beach today (I live on the Northern Oregon Coast) Couldn’t help but notice a lot more styrofoam bits than I usually see. A lot more. I too, am concerned with what will wash up on our beaches. I not only regularly do beach clean up but I am reducing my own plastic use, inspired by My Plastic Free Life. Cleanup on the beach is as Beth mentioned in her book, trying to empty a bathtub with the water still running. Sigh.

Thank you for your always thought provoking posts. I have been guilty of feeling green when I choose Trex decking instead of wood. But as you point out, that stuff lasts for a long time and can not be recycled again. That is new information to me so thanks.

I actually contacted the Trex company to find out if the material could be recycled, and they said no. So it’s not just speculation. But if you have Trex decking, why not send them a letter and ask them to close the loop? :-)

It’s so bizarre that removing this is such an issue. Don’t we have the technology?? :) I propose a big crane lifts it out of the water, puts it on a truck and takes it somewhere where it can be used. Is that possible? Or an some big ship or something.

@TigerLee What truck would this fit on?

I see it shows the length but not the width. Maybe a semi? Too bad they do not say if it’s disintegrating or what sort of state it remains in. Could it be cleaned and reused somewhere else…maybe a lake or something? Or is it harmful and would mess up the water supply. Thanks for this post! I have been wondering when things would start washing ashore but missed this article in the Oregonian. :)

@Beth Terry @ShiploadofWilco @TigerLeeyou must me under 9 foot to be on the hwy. length varies from state to state, but they could always hire flaggers and an escort. you can use more than one trailer. they move pieces of wind turbines down the interstate and those things are huge!

You are right chicknlil, there are transports built to deliver HUGE convections, cranes, 200ton bulldozers, fired heaters and large industrial pieces, however those items are generally not transported over-the-road for very long distances. They still require a rail or barge offload to avoid overhead obstructions.

@TigerLee
Part of the issue with this dock, also, is the fact that the microorganisms on it can wreak havoc on the native ecosystem. Dragging it around only loosens up these life forms. Its a double-whammy of a problem.

16000 people paid for this tragity with their lives….it will be cleaned up… we all need to look at what we are using in our lives… plastic is forever recycling is fake.

Im scared what will wash up next. Were bound to get more. Whose footing the bill on this stuff? Us or them? I wonder…

In my city all the buildings are being insulated, in a very unsustainable way, with blocks of styrofoam. You’ll be horrified to see how much of it is being let loose in the environment!

Yes, but not radioactive water. NOAA says that the debris that is floating across started its journey before the reactor melt down.

If this dock from japan is showing up I’m assuming contaminated water is as well.