Five years ago, a photo changed my life.  I was just a regular American, choosing double plastic bags at the grocery store, drinking bottled water, living on microwaveable meals and energy bars wrapped in plastic, and buying whatever I wanted whenever I wanted without ever considering how things were made or where they were going to end up.  I gave money to Greenpeace, watched environmental documentaries, and had even worked briefly for Clean Water Action right after college, but my environmental actions did not extend to my personal choices. 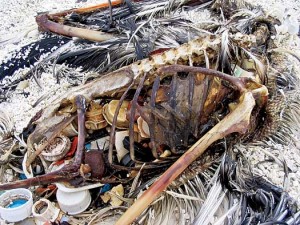 And then one night, In June 2007, sitting alone at the computer, I stumbled across an article about the ocean plastic pollution problem and saw the photo that shocked me like no other had.  It was a poor quality image of a dead albatross chick on Midway Island–halfway between the United States and Japan and thousands of miles from any civilization–that was full of everyday plastic pieces, like the plastic bottle caps I threw away on a regular basis.  The plastic didn’t come from Midway.  It came from unconscious consumers like me.  I learned that the mother birds fly out across the ocean to pick up food for their chicks, except they are picking up pieces of plastic instead. And the baby birds starve with bellies full of the stuff.

A maternal instinct kicked in that I hadn’t even known existed.  After sobbing in my chair for several minutes, I decided that I couldn’t continue living the way I had been.  That very night I committed to stop buying new plastic, and this blog and all that followed were born.

Waking Up the World 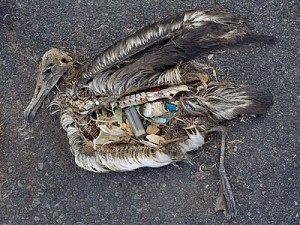 Two years after I saw that photo, photographer Chris Jordan, poet Victoria Sloan Jordan, filmmaker Jan Vozenilek, and Plastic Pollution Coalition co-founder Manuel Maqueda, made a trip to Midway to photograph those birds properly.  Chris’s photographs shocked the world in the same way that the original photo had shocked me.  They were beautiful and terrible and relentless in their depictions of plastic-filled bird after plastic-filled bird.

Ever since that first trip three years ago, Chris and the team have been working on a film, ALBATROSS (previously titled Midway Journey), to tell the story of plastic pollution and spread the message of what we are doing to other creatures on this planet–creatures that most people like me probably don’t even realize exist.

And here is a fabulous interview with Chris Jordan about the project in Outside Magazine:  https://www.outsideonline.com/1900606/love-story-midway-island

To fund the project, the team have created a Kickstarter campaign with a target of $100,000.  They must make their goal in the next 11 days (July 18) or the project will not receive any of the Kickstarter pledges.  So far, they have raised an amazing $61,531 in pledges towards their goal, so I just know that with enough of us kicking in some funds and forwarding the campaign to everyone we know, they can get there!

I want this project to be funded because I want the world to see what I saw 5 years ago.  I want everyone to feel the connection that I felt and to understand that there is no separation between us and any other beings on this planet, no matter how small, no matter how remote.  Our actions matter. This is the exact film that changed my life. The day I watched this video I went for my afternoon shopping not to the local store, but to the local market, equipped with glass jars and reusable bags (that I happened to have plenty of). It was the simplest and easiest of the changes I have introduced, but it was also the biggest one.

how horrible :( this post brought me to tears. seeing that poor little bird and how all it wanted was something to eat and got plastic. You know, this may sound pretty ignorant on my part, but 2 days ago, I was not aware there was anything wrong with plastic. I figured it was fine because it could be recycled. A friend mentioned that she was trying to reduce her plastic consumption, because plastic is bad for health and the environment. I figured well that cant be; she is probably wrong, so I googled it. And she was right! One of the first things I checked out was your blog. For the past two nights this blog has kept me up all night because of the fascinating articles and your plastic free list is just great! I am learning so much and never want to be the reason why a helpless animal dies because of plastic.
Looking forward to trying to live a plastic free lifetsyle :)

Wow. It sounds like you had the same experience I did 5 years ago when I stumbled across that photo. It’s shocking. And shocking that more people still don’t know about the problems with plastic.

Darris, cool. Will you let me know if anything really interesting washes up? Are you taking pix?

Yes Beth, I am taking pictures. In fact, I’ve been taking pictures for the past 3 years in earnest. I’m also shooting images of dead birds and other creatures I find, living or dead on the beach. Part of our data collection process is to photograph what we find. I would love for you to join me for data collection sometime. I do it monthly on the 25th of the month (this month it will be either on the 24th or 26th).

As always Beth, I so appreciate your activism and for inspiring me and many others to work toward a plastic free world.

Thanks Beth! Shared and pledged. :)

Thanks for the update – I just pledged and shared on FB & Twitter.

Thanks for posting, I pledged as well!

This is horrifying! Thank you for sharing though. Things like this inspire me to continue changing my lifestyle choices.

Done! And I hope to see as many responses here as I do when you post a giveaway!!! Time for us to give back.

@DrSuRu Thanks for the RT. This story is so important and needs to be told. @midwayjourney http://t.co/fFxi0M0Q

thanks Beth.Powerful images that certainly urge a radical shift in our thinking and actions. I thank you for your ongoing commitment and model to us all. Donated,shared and commitment to change strengthend.

Done. Thanks for keeping the awareness going Beth.

My awareness came when you posted one of Chris’ albatross photos on your ‘Beth Terry’ site. That day I began photographing the trash I picked up on the beach. Thank you Beth for giving us information that empowers us to make changes in our lives and to educate others. Chris’ film looks amazing!

My awareness came when you posted one of Chris’ albatross photos on your ‘Beth Terry’ site. That day I began photographing the trash I picked up on the beach. Thank you for giving us information that empowers us to make change in our lives and other Beth. Chris’ film looks amazing!

It was when you posted Chris’ photos on your ‘Beth Terry’ site that began my journey toward less plastic in my life. I also began photographing the trash I picked up on the beach. Thank you for bringing this awareness to us Beth. Jordan’s project is fabulous!

Wow, that trailer is powerful, images I’ll probably never forget. I just contributed too, thank you for spreading the word.

Thank you for contributing!

Saw this trailer two weeks ago and it absolutely kicked me in the butt and immediately prompted my own commitment to stop buying new plastic… donated, shared … it needs to be made and seen!

I contributed to the campaign. Thanks for providing info on this great project!

So sad. Even after the chick has died and returned to the Earth, the plastic still exists, waiting to be washed out to the ocean and kill again….