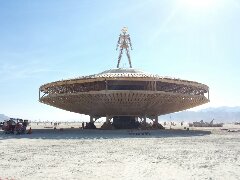 This will be my penultimate Burning Man post for the year. I think. (I have one more in mind, but who knows if I’ll get a burning desire to say even more after that? Or less?)

I have a discussion question for you, but first, a little background and lots of pictures. (I don’t think there is any nudity in these photos, but let me know if you see some and I’ll remove it. This blog is rated PG even if my life isn’t always.) 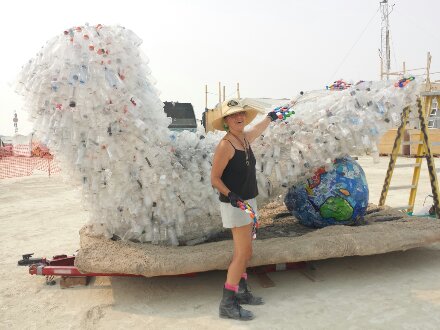 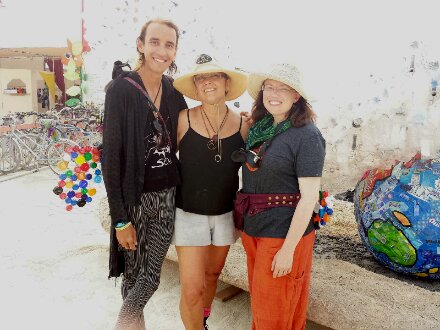 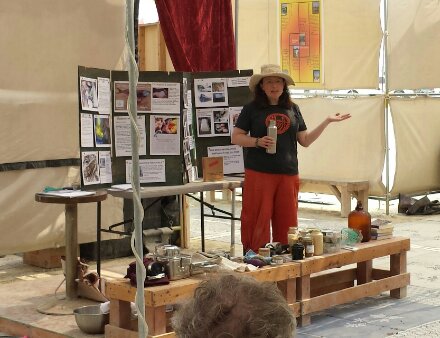 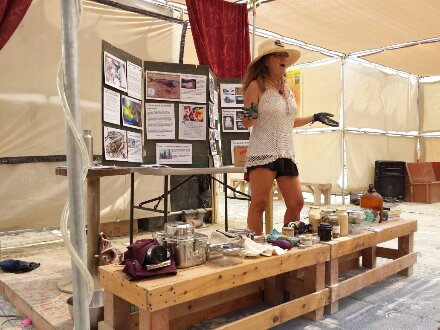 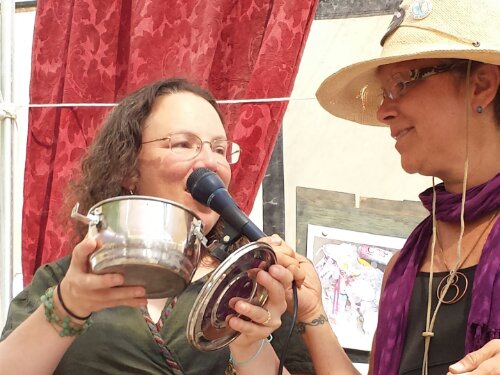 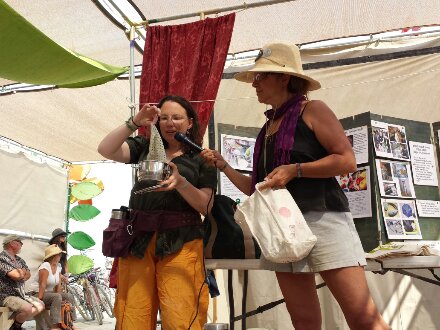 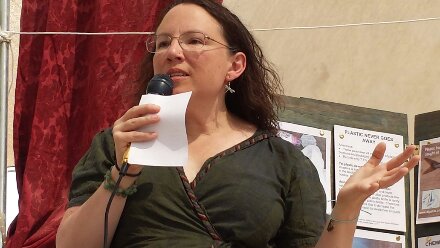 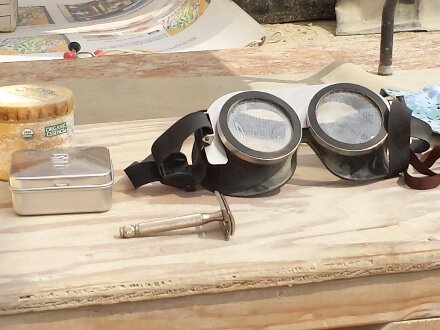 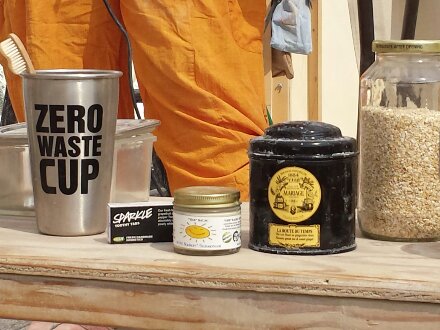 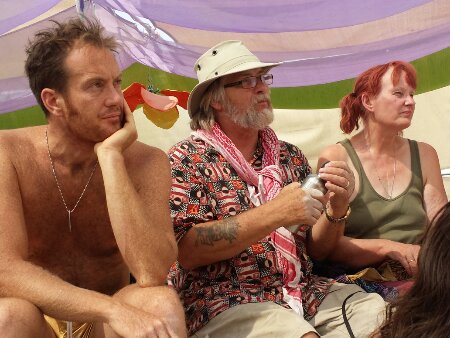 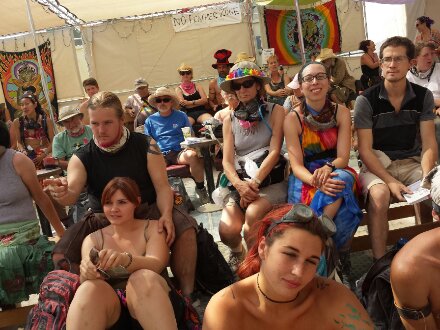 Karima from the Plastic Pollution Coalition was there, taking pictures and working on quantifying Burning Man’s plastic footprint. 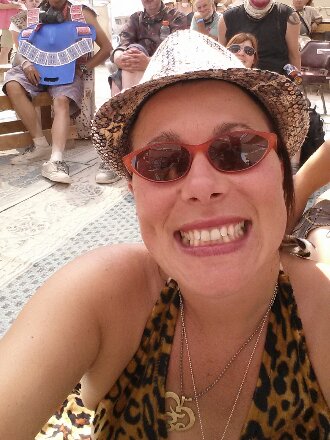 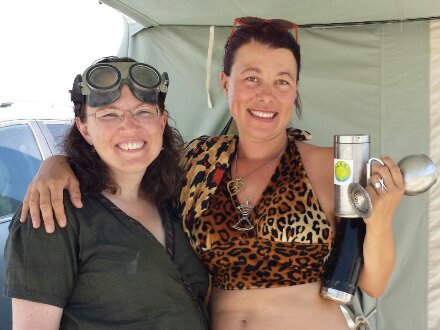 So was my friend Tracey whom I camped with last year and who had worked very hard to deplastify her business. 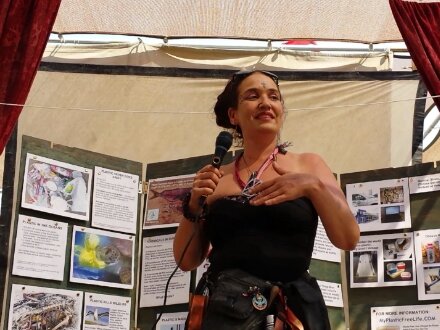 Several people came up to me during the week who had the same idea about plastic. The Moop Monster made an appearance… 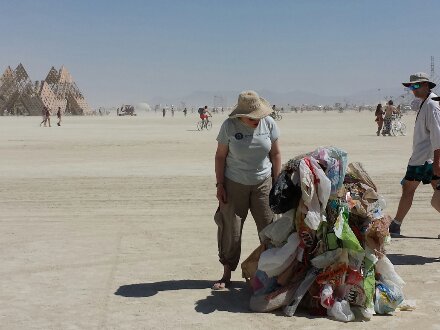 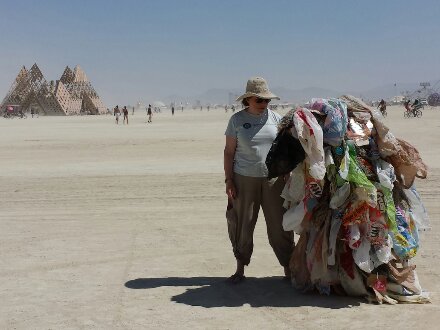 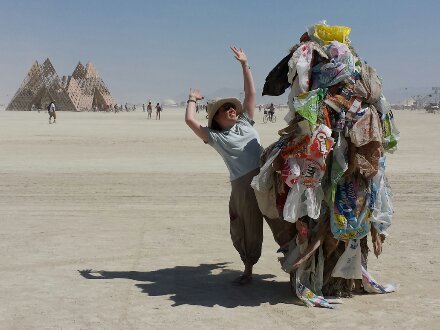 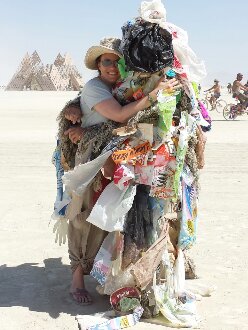 (He has offered to make me a similar costume which will be much more comfortable than my all-plastic sea monster costume.)

And this guy came by with a huge bag of plastic… mostly bottles… that could not be recycled on the playa.  More and more, plastic is on people’s minds. 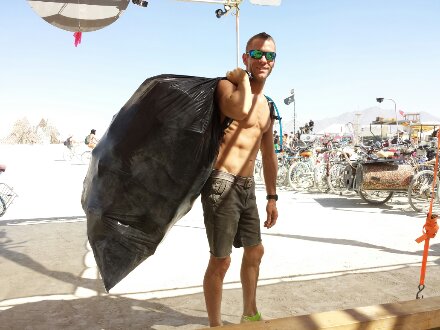 One of our events was a talk given by organic chemist Rebecca Braslau, who explained the history and chemistry of plastic, 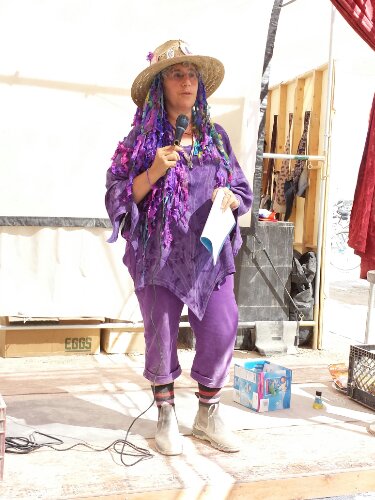 demonstrated how flammable celluloid is by lighting a ping pong ball on fire, 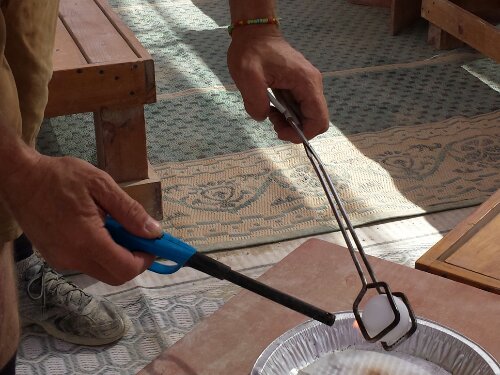 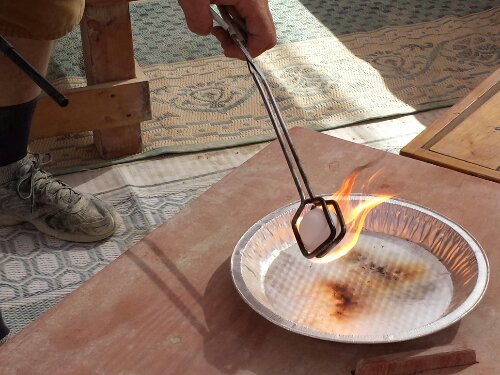 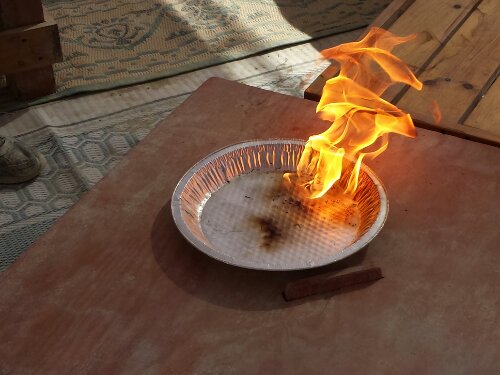 and made Nylon in a beaker right in front of us. 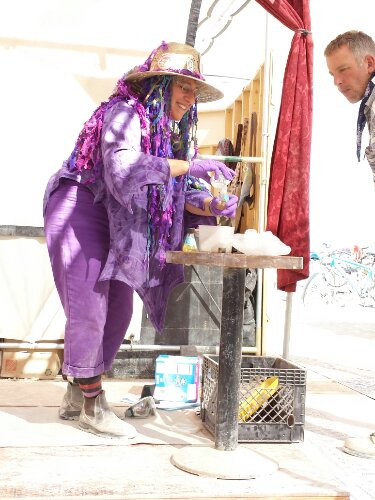 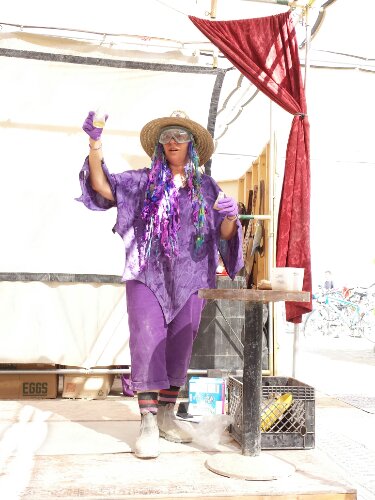 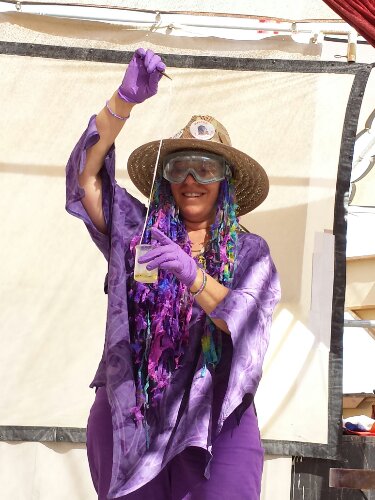 Rebecca talked a lot about the toxic chemicals in plastics, particularly BPA and phthalates, the latter of which she is working on making less likely to leach out of plastic.  (I may post more about her work and experiments later… or you can Google “Rebecca Braslau phthalates“.)

At one point, an audience member asked her what Tritan plastic was, and she said she didn’t know. I piped up and said it was a substitute for polycarbonate with BPA, but that I didn’t trust it. Rebecca said, “But do you trust any plastics, Beth?” And I answered that it depends on the use, but not for food contact.

And since then, I’ve been thinking… and this, finally, is the discussion question…

When is plastic not “moop”?

At Burning Man, Moop means “material out of place” because one of the hard and fast rules of Burning Man (and there aren’t many) is “Leave no trace.”  And that means you’d better not leave anything… not even bits of lint or paper or feathers… on the ground. Anything that falls on the ground must be picked up immediately. And the Earth Guardians give out free handmade Moop Bags (made from repurposed pants and neckties) for people to carry with them to pick up Moop wherever they see it.

On the playa, even natural, biodegradable materials are Moop because they can become the basis for the creation of dunes, or “playa serpents,” that can and have caused rollovers for future visitors in speedy vehicles when they hit them unexpectedly.  In the regular world, non-native species could be considered Moop even though they are “natural” because they interfere with the way the area has evolved over the millennia.

But what about plastic? It hasn’t evolved along with anything. It has no natural habitat.  Visitors to the playa bring drinks and food in plastic bottles, containers, and packaging and then “do their part” to leave no trace by packing out their trash and throwing it away or recycling it.

But where is this magical habitat called “Away?”

It’s some other natural environment or landfill where the plastic will last and potentially leach toxic chemicals for a long time. Or it’s an incinerator, which could emit toxic emissions and will certainly produce toxic ash.  Or it’s a recycling center in China, where in the best case, the plastic is downcycled into secondary products before ending up in the landfill anyway.

So when is plastic ever not “material out of place” in this world?  I still use plastic.  I’m writing this blog via a device made of plastic.  My bike tires and seat are plastic, as is my helmet.  And the entire inside of my refrigerator and dishwasher.  If I made a list of all the plastic I use on a regular basis, it would still be very long despite having given up almost all disposable plastics, plastics in direct contact with food, and most new plastic items.

So I put the question to you guys for discussion.  Get as philosophical as you want. Should we be working, as Rebecca Braslau is, to make synthetic plastics less toxic? Or should we be seeking natural alternatives to synthetic materials? And what does “natural” even mean at this point?

Where is plastic’s rightful place in this world?

What about veggie-based plastics? In particular, hemp, because it’s easier on the planet.

I don’t know, I feel like if we put the amazing creative energy and potential we have to good use we would certainly be able to live a plastic free life with products that have non-destructive life-cycles and are non-toxic. I’m not claiming to know anything about these products that are non-household, but I’m 99% positive it could be done.

TraceyTief Eco novice Yes yes yes. We have completely lost our desire to repair anything, and this is one way that I think our prices being driven down constantly is a shame. People don’t fix things, not only because it’s a pain, but also because it’s generally more expensive than buying something new!

@Georgina Bailey
You are a wonderful Burner, Georgina. Taking the playa to the world is, in my opinion, answering the highest call on a Burner.

Eco novice I think we need to live a lot more like our ancestors if we are going to save our environment. We’ve forgotten the hassle of disposable and easy to break items. We need to reorient. I don’t want to consume a new toaster every year, whether it’s made of metal or plastic. I want the old school 10 year toaster that can then be repaired.

First off, thanks
for posting that photo of me! It was a great honour to get to tell your audience that plastic-free business is possible. And thanks for letting me be an Earth
Guardians groupie. You know you’re an eco nerd when your best times at
Burning Man are hanging out…
My vision of a better world includes:
1. Durable goods made of the ideal materials for their purpose, and made with the whole life cycle of the materials in mind. So maybe fridges would be made with low toxin plastics, or even stainless steel. They’d cost more, but they would be made to last 20-40 years instead of 10. My first energy saver fridge lasted 30 years. So I’m not dreaming.
2. Laws and regulations that require localities to absorb, reuse or recycle their own waste.
3. Returnable bottle programs that pay a truer value for materials to be recycled. Thus glass, paper and metal would be perceived as valuable again versus plastics.
4. People and businesses reoriented towards local, package-less, refillable goods. Think 14th century Europe going to market with a basket and some cloth, maybe a jar for honey. Or I charge you $3 for a glass jar, so you bring it back every time for me to refill. Or I tell you how to find someone local to you who makes toothpaste, or I sell you the workshop notes, because it doesn’t make sense to post glass jarred toothpaste to you.
5. Last but most importantly, a school system where every kids learns how to make body care products throughout their education, building skills and concepts related to health, science, math and social science.

Once plastic is 100% biodegradable and actually composted, then it will not be MOOP. I don’t think we are going to find natural alternatives for all plastic. As I recall from Plastic: a Toxic Love Story, plastic was first hailed as a wonderful innovation that would help save nature b/c it provided alternatives to things like tortoise shells that were becoming more and more scarce. So unless we are ready to go back in time and live like our ancestors, as long as we are in the modern world consuming, I think we’ll need plastic.

Moop, a new and useful word beyond the playa. Will be using it!

It was Burning Man that helped illuminate my inconspicuous use of plastic. I returned home with a stronger resolve to reduce my waste, and hug more San Franciscans. :D

and to actually answer your question, I think we should be doing both of those things. on the “green chemistry” front, we should be finding other plant sources for raw materials for synthesis, making all plastics less toxic, and working on biodegradability. but these aren’t a means to continue with the way we use plastic now, just a way to make those “necessary” applications have less of a negative impact on the world. finding sustainable, non-synthesized materials as alternatives is also a necessity where possible/plausible, especially when it comes to products that “have to be” disposable.

I’ve probably said this before but I think plastic should be used for non-disposable purposes where it replaces a disposable product/outlives a product made of another material, it should be used for “necessary” medical purposes where it lessens risk of infection and accomplishes tasks that would not be possible without it (and I speak of this in a life-saving way, not just for the purpose of convenience), it should be used for non-disposable artistic purposes (because, as susan freinkel’s “plastic: a toxic love story” discusses, it really is an amazing substance that shouldn’t be viewed as cheap, disposable, or imitative), and to make things safer (in terms of safety equipment, etc, not “oh my god this glass broke and the world is over!”). and in all these circumstances, it should be manufactured and disposed of safely and wisely. there are surely other practical applications for it too, as a would-be chemistry enthusiast and would-be artist, I have always appreciated it as a beautiful and versatile material. trying to live without it in a societal infrastructure that has been built around it definitely makes you appreciate its value as a material.

I guess there isn’t one magic bullet. We obviously have to reduce our dependency on plastics (whether toxic or not) as the resources needed to produce them are not infinite and recycling plastics remains difficult. We should support research like Rebecca’s, but this can never be sustainable and should only be seen as a short-term ‘fix’ – these materials are still likely to be energy and resource intensive to produce and hard to recycle/dispose.
But….if we de-toxify plastic will everyone start to love plastic again?!