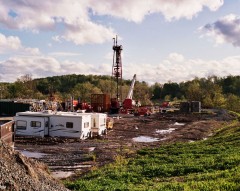 Most people still think that plastic is made from petroleum–oil.  And much of it is.  But in the United States, a large percentage of plastic is actually made from natural gas.  Why? Well, plastic is made from hydrocarbons.  And fossil fuels like oil, natural gas, and coal are rich with hydrocarbons.  In fact, in the early days of the plastics industry, the primary source of hydrocarbons to make plastic was coal tar.  The industry will use whatever is plentiful and cheap.  And with the U.S. fracking boom, plastics manufacturers are encouraged to build manufacturing plants in the areas where the natural gas is being extracted.  The more available natural gas, the more plastic manufacturing in the United States.

According to an article in Plastics News (PDF) in April of this year, increases in natural gas extraction could lead to increases in the production of polyethylene, polypropylene, and even the most toxic plastic, polyvinyl chloride:

PVC, like PE, could benefit from low-priced ethylene feedstock as well as from low costs for gas-fired electricity needed to make chlorine.

The direct impacts of fracking are bad enough. But the fact that more fracking could mean more PVC production compels this plastic-free advocate to take action.

Please join me on October 19 for the 2nd Global Frackdown Day of Action.  I plan to attend the event at Oakland’s Frank Ogawa Plaza at 12 noon.  I’m disappointed that California’s Governor Brown is supportive of fracking in my state.  I mean, I voted for that guy! (Not that there were so many awesome choices this time around.)  So I want to join with others to demand a ban on fracking in California.

As the name suggests, there will be events all over the world on October 19.  Check the Global Frackdown event page to find an action in your area.

Here are a few links for more information about fracking and the damage it causes:

Global Frackdown: Separating Fact from fiction — Speaking out for our Children and Our Future

Dangers of Fracking (Scroll down the page… a cool, graphic explanation of the process, brought to you by the guys who made Gasland.)

Wanting to see some older posts. See if anyone answered my comments about plastic free q-tips and emery boards.

Hi. Where did you post the question about q-tips and emery boards? It must have been on a different post. Do you know which one?

bet ya didn’t know they use nuke bombs in fracking!
https://aoghs.org/technology/project-gasbuggy/

Wow. That’s really interesting. But not something they are doing now… it was an experiment in the 60’s.

Thanks for making this connection Beth. It’s so important to see the whole picture.

Wow….this is a whole new fight!!