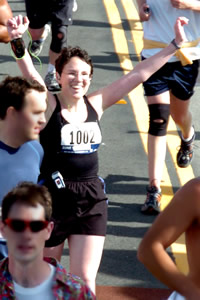 Sorry to have been out of touch for a month.  I’ve had a lot going on.  But I’m making progress on my 2014 goals.  Down 18 pounds and running again.  No, this picture isn’t me this year.  It was taken back in 2006 during my marathon training year.  But it’s a motivating image for me.  This year, though, I hope to resume my running habit using a lot less plastic.

Getting Up to Speed

I’ve done this before — run 5K (3.1 miles) in under 30 minutes, that is.  I know I can do it again.  But it’s going to take a lot of work.  As I wrote last month, I had been sitting on my butt for the past seven years.  So, I have to break this resolution down into sub-goals.

1) Run 3.1 miles without walking… at whatever speed.  I’m almost there!  8 weeks ago, I started the Couch to 5K (aka C25K) training program, which starts off with 60 seconds of jogging for every 90 seconds of walking.  This week, I’m up to 28 minutes of non-stop running with 5 minutes of walking before and after to warm up and cool down.  At the end of next week, I’ll supposedly be ready for a 5K.

2) Sign up for and complete an official 5K… at whatever speed.  I’ve done the signing up part.  I plan to run the St. Patrick’s Day 5K in San Francisco on March 9.  At this point, I estimate the race will take me about 34 minutes to complete.  And that’s fine.  8 weeks ago, it would have taken me almost an hour.

3) Complete an official 5K in under 30 minutes.  This could take me all year.  And that’s fine.  I really just want to develop a regular 3 mile running habit.  Next year, I may add mileage.  But right now, I’m just interested in consistency.

As I mentioned last month, runners use a lot of plastic… from synthetic “technical” wear and shoes to energy bars and gel packs.  And if you believe the popular running websites, wearing 100% cotton while running will kill you.  Why? Because cotton absorbs moisture, so you stay wet while running.  You might be more prone to chafing, and in the winter, wet clothes could actually be dangerous.  But you know what?  I live in a mild climate, I’ve been running in natural fibers for the past 8 weeks, and I’m still alive!

Here are some of my running outfits: 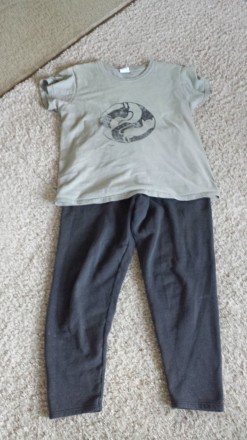 Goodwill and thrift stores are great places to buy secondhand workout clothes without creating any environmental impact and saving your wallet.  The main thing, I have found, about running in sweat pants is to find ones that are fairly form fitting.  The more snugly they fit your body, the less likely they are to rub and chafe.

I did also buy a couple of new items of clothing.  I searched and searched, hoping to find natural workout clothes appropriate for running, but everything contained some amount of synthetic fibers. Finally, I found prAna’s Cecilia knicker (2017 update: It looks like the Juniper pant has replaced the Ceclia knicker and is made from the same materials) and bought two pairs. 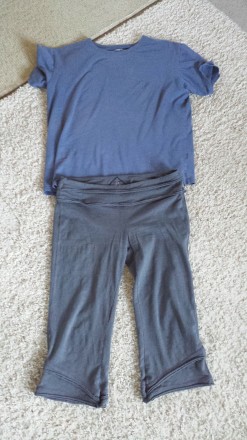 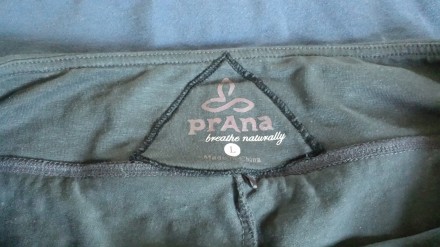 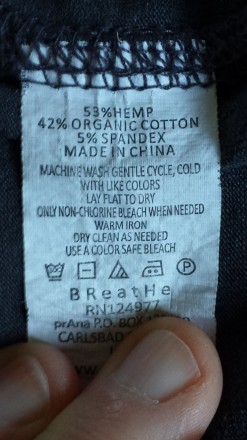 It was the least amount of spandex I could find in a tight, form-fitting pant. And honestly? I’m in love with how they feel. No chafing. And they don’t seem to hold onto sweat the way my sweat pants do. Maybe a little compromise is okay? At least until someone comes up with a totally synthetic-free option.

Give Up the Funk

You know what else sucks about synthetic running clothes? They stink. They may not hold onto water, but they sure do trap some funky body odor. Why? Because plastic is lipophilic, meaning it attracts oils, and it’s those trapped oils that hold the bad smell. 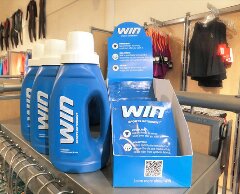 There’s even a special detergent nowadays (in a plastic bottle) for getting the stink out. I know because I used to use it. But who knows what chemicals are in it — they don’t list them on their website. So glad to be off that particular train!

In my next post, which I promise will be sooner than this one was, I’ve got an interview with a plastic-free runner who asks us to consider whether we really need so much running shoe. If that sentence seems odd, stay tuned. It will be explained.

Looking forward to the interview! It’s a topic that always has always been a dilemma for me!!

AWESOME Beth! You’ve inspired me to get back into my running… Couch to 5km – that’s me.

Could work as long as I knew for sure that the sheep were ethically raised and sheared. It would not work for vegans.

0
Reply
Plastic is a Drug

I was going to mention merino, but I see someone’s beat me to it on your blog. I haven’t done a huge amount of research on it but I have a few items of clothes and there seems to be some amazing superfine strains of wool around these days – it wicks away and dries quickly. And it doesn’t smell!

Go, Beth! I’m not a runner, just a walker and hiker, but I LOVE the shoes (leather with Vibram rubber soles) I’ve been wearing for a few years now. I’m into the minimalist/barefoot shoe thing, so if you ever plan to transition to these kind of shoes, please read up about barefoot running/walking first and take it easy. I’m a big fan of Soft Star Shoes, a small company that makes moccasins and casual shoes that many people run in. All of their shoes are made in their shop in Corvallis, Oregon, so you also have the satisfaction of knowing they weren’t made in some factory in China and shipped across the ocean. Their team is friendly and knowledgeable, so don’t feel shy about calling them with any questions. They can be found on the web at: http://www.softstarshoes.com

Great job on the running goal! I’ve gotten back in to running again too – it feels great. But yeah, so much plastic in the ‘race culture’ – it’s alarming. But hey, at least the medals are, y’know, metal.

Wow Beth – impressive! The weight loss, the running and the dedication to finding plastic-free running clothes! Best of luck with your goals.

Thanks for this interesting post Beth! I have been thinking about plastic free running many times. Although I could imagine finding plastic free pants, bra and a shirt, I am not sure about the shoes. Occasionally I run barefoot, but this is not always possible because it is quite cold here and because of litter (glass) and dog poo on the sidewalks. I am looking forward to reading your next post.

Firstly, congrats (outside myfitnesspal, pal!)
Secondly – every run of late has come with a free shirt – some synthetic, some not. I just wear them as I’ve been given them, and better than landfilling them. Seems to be no ‘opt out’ either. But, I do agree with the stinky factor of synthetics.

Otherwise, i run in old shirts and yoga pants, and wash after use. Sure, they get wet, but no chafing issues to date. the moisture in this humid summer in Sydney is a little bit too much but not ‘die’worthy!

Congrats on running again, and thank you for sharing! Makes me feel better about all the times I have searched for non-synthetic gear and come up short. Can’t wait to learn about shoes!

Nice post. Super excited to hear about plastic-free shoes, though!

Wow Beth… you are totally knocking my socks off! My wool socks that is!
I struggle to find natural fibers that are suitable for cycling. I have a pile of base layers, and cycling jerseys that I bought used so I figure that’s OK – at least better, but you’re totally right about the stink! So I finally broke down and bought a SmartWool base layer last fall and it totally ROCKS! Anyhow, I’m sure you don’t quite have to worry about freezing your rear off to the degree that I do here in Denver – especially since one gets a LOT colder on a bike than running because you’re moving fast – so it’s like riding in a 20mph wind even when there is no wind.
All that being said… have you considered merino wool? It’s totally my new favorite fabric – not itchy or scratchy at all, and they make it in a variety of thicknesses. I know that Ibex and Smartwool both make tights and knickers. I think there’s probably some spandex in the mix, but it might be worth considering. I’ve grown to totally depend on my merino wool socks and I wear them year round for cycling. SOOOO much more comfortable than cotton. Anyhow, they do make merino wool tank tops and summer stuff, so I think it doesn’t get to hot.

I have yet to find anything wind and waterproof in a natural fiber though. Maybe something made with oilcloth could work, but it would probably have to be custom made since I sincerely doubt there’s any commercial cycling wear made from it. So I have purchased a few new items that were synthetic – cycling shoes, wind/rain jacket, warm winter cycling jacket with wind-stop fabric, cycling gloves, and – of course – cycling shorts which are worn without underwear – that’s where I draw the line on used clothing! I’d LOVE to hear any thoughts you might have on those areas.
And my other big win was that I found a cage that fits my kleen kanteen water bottle so I don’t have to use the plastic ones anymore. Woo Hoo!
Anyhow, sorry to blather. Keep up the amazing work, you’re an inspiration in so many ways!