Okay, So It’s Not the Cover of the Rolling Stone, But Still…

So anyway, it’s a great … Read the rest 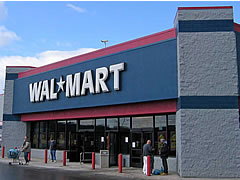 Let me apologize in advance for any sarcasm you might detect in this letter. It’s late, and I’ve been losing sleep for about two years, basically working for free to wake people up to the environmental crises we face. So you can imagine that I’m a little bit cranky. And maybe just a little bit jaded by big box companies that profess to be going green, when “Big Box” seems to be the antithesis of green.

Wal-Mart, Wal-Mart, Wal-Mart. You are big and muscly. And now you want to use your muscle to demand sustainable practices from your vendors. You have created a brand new Sustainability Index (PDF), despite the fact that many third party standards already exist.

But what are the standards you are pushing? And who gets to decide what they should be?

Climate Action Day is coming. What will you do?

Back in the early 70’s when I was a child, there were few movies scarier to me than The Wizard of Oz. Surprisingly, the made-for-TV Horton Hears a Who was one that frightened me more than that wicked green witch with her flying monkeys. Every time it came on, I’d hold my breath until the end, sure that this time the Whos would not yell loud enough to save themselves. Those in charge of their very existence would not hear them. They’d end up boiling in the pot for sure. But of course, each time, the Whos did come through. Little shirker Jo-Jo adds his voice to the chorus of Whos crying, “We’re here! We’re here!” and the day is saved. I could sleep easy that night, knowing that once again justice (and cold hard facts) had prevailed.

As corny as it might seem, every time I think about the climate crisis the world faces today, I can’t help thinking of Seuss’s story and how, even with the expert testimony of … Read the rest 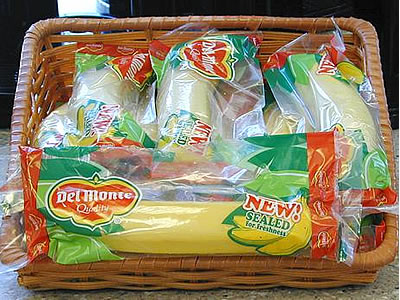 Plastic-wrapped bananas are redundant and stupid, aren’t they? I mean, really. Bananas already have a natural wrapper. But 7-Eleven wants to make sure they stay fresher even longer. So 27 stores in Dallas, Texas are testing out the new plastic-wrapped bananas. If successful, the chain plans to sell them in all of its stores.

According to an article in USA Today (forwarded to me by Fake Plastic Fish reader James Langford), “7-Eleven recognizes that the wrapper could be an environmental issue and has asked supplier Fresh Del Monte to come up with a wrapper that’s biodegradable.” Um… it already has a biodegradable wrapper. It’s thick and yellow and decomposes in about a week, as evidenced by the contents of my compost bin.

Since 7-Eleven does appear to be somewhat concerned about its environmental footprint, let’s help them realize the error of this packaging choice. Please make a quick phone call … Read the rest

Bringing Ocean Plastic to a Classroom in Benicia 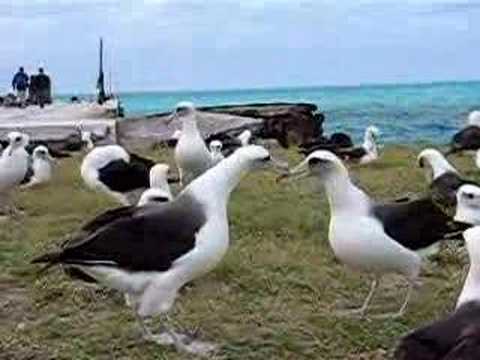 Well, those worries melted away as soon as I met the warm and totally down to earth Sue. And the education started before we even got to the classroom. After picking me up at a bus stop near Benicia Middle School, Sue showed me where she and many residents of the area had gathered to collect trash during Saturday’s… Read the rest 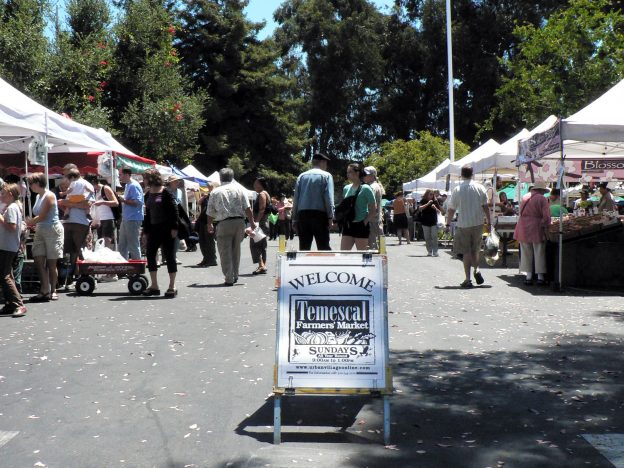 I’m so happy I could cry! This morning, I was all set to write about my meeting yesterday with one of my personal heroes, Colin Beavan, the No Impact Man. But checking my email, I found the following message from Bianca Pardini of my local Temescal Farmer’s Market:

I thought you’d be interested in knowing that starting October 1st, 2009 plastic bags will be banned from all Urban Village Farmers’ Markets (Temescal included). With the encouragement from customers like you and the advice and support from the people at The Ecology Center, we are hoping this will be a smooth transition. Please see the attached letter. Hope all is well. 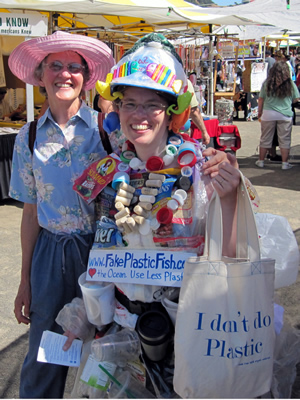 I’ve bragged about how green we are here in the Bay Area before, right? Well, leave it to Marin County to host what it called “The Greenest County Fair On Earth” this past weekend. Powered by solar and biodiesel, providing compostable containers and flatware as well as recycling and compost stations to collect them, offering many opportunities for environmental education throughout the fair, and actually becoming a Bay Area Certified Green Business last year, the Marin County Fair is the last place you’d expect to see a lot of plastic, right?

Well, as great as it was, nothing is perfect, and there’s always room for improvement. Plenty of fairgoers were drinking from disposable plastic bottles which had been provided by a few of the vendors. Enter the Plastic Sea Monster! I was actually invited to come and hang out with fairgoers, educate them about plastic, hand out some small flyers, play with the kids and accost… Read the rest

My Video Thank You to Oprah 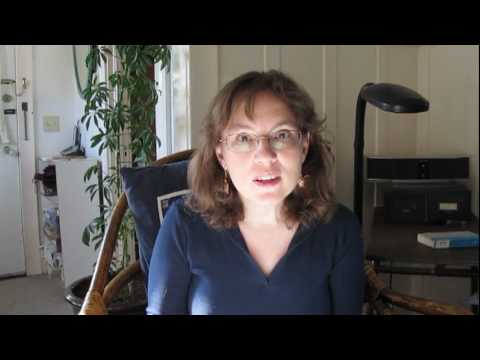 After interviewing Fabien Cousteau about plastic in the oceans, she had a few “Aha! moments”:

Oprah wants to go beyond washing out her zip lock bags: http://www.oprah.com/media/20090422-tows-oprah-aha-moment

I was excited and moved to see this issue garnering the attention of an audience as large as Oprah’s. So moved, in fact, that I wrote her a letter… and then recorded it on video. Now I just have to figure out the best way to reach her with it:

My belief is that once audiences see the horrific images of what plastic does to the environment, they will want to know what they can do. Let’s let Oprah know that there are many of us out here already going beyond washing out plastic bags. 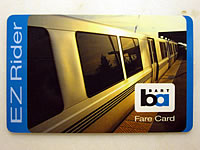 BART’s EZRider program is a great way to take public transit in the San Francisco Bay Area while reducing our plastic waste. Yes, regular BART tickets are made from plastic. Disposable plastic. And they are not recycled. The EZ Rider program replaces hundreds of disposable BART tickets with one refillable card, which is linked to a credit card and reloaded automatically as you use it.

Included with my new card was one piece of plastic I didn’t need. So I’m sending it back to BART with the following note.

Thanks so much for the new EZ Rider card. I love the EZ Rider system, specifically because it eliminates the waste of disposable plastic BART tickets.

I am returning this plastic carrying case to you because I really don’t need it. I prefer carrying my EZ Rider card in my wallet with the rest of my credit cards. 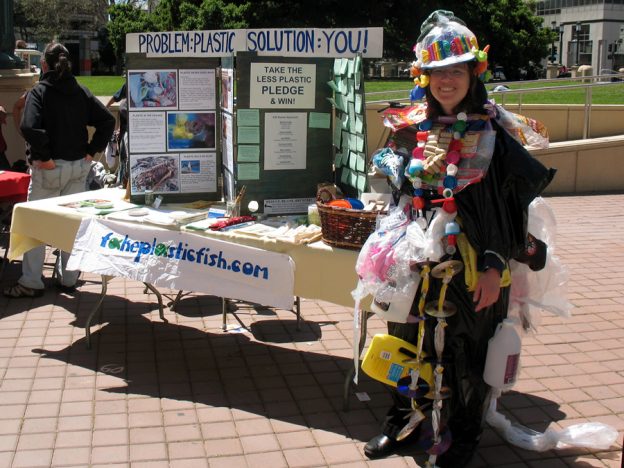 I would love to show you the photo of a plastic-bedecked Beth flanked by a class of enthusiastic middle schoolers during Oakland’s Earth Expo on Wednesday. I’d also love to show you the photos I captured of an ironic stray plastic bag in flight over the Expo grounds. Unfortunately, I can’t show you these images because I carelessly left my camera unattended on the display table for a few minutes, and it got bored and ran away.

If you are the person who helped liberate my camera, can you please at least send back the memory card? It’s not worth much, but I’d sure like to have those photos. I’ve already replaced the camera with a much smaller model, one which I’ll keep securely in my pocket next time. (More plastic waste for the tally this week. Another of my less than mindful moments. *Sigh*)

I’m very grateful to the helpful folk who took pictures and sent them to me: Oakland Zero Waste Initiative Team Leader,… Read the rest