GreenCitizen does more than recycle your e-waste 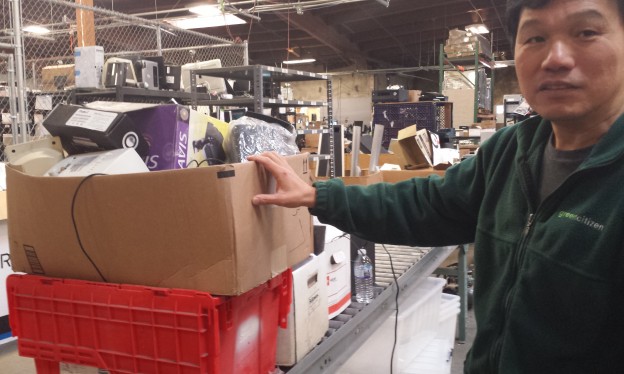 I first learned about GreenCitizen several years ago when I was trying to figure out what to do with old CDs and DVDs.  Since then, Michael and I have taken several dead gadgets to them: our old rice cooker, our old blender, and some obsolete computer equipment.  So I was excited to take a tour of GreenCitizen’s hub in Burlingame this weekend and have a chat with founder and CEO James Kao.

Kao was born in Taiwan and graduated from UCLA in 1982 with a degree in math and computer science.  He went on to get an MBA and work for companies like HP, IBM, and Oracle as a software engineer.  As a guy with an engineering mindset, he’s all about solving problems.  So, after seeing a short film called “Exporting Harm: The High Tech Trashing of Asia” about e-waste pollution overseas, he set out to create a solution.

GreenCitizen is more than a recycling center for e-waste.  Kao wants to rethink the idea of waste in the first place.  As… Read the rest

The Reuse Alliance Wants You to Talk Like a Pirate

I realize  Talk Like a Pirate Day is over for 2012, but there’s a certain piraty expression that’s good all year round:  Arrr!  According to the official website, it means “variously, ‘yes,’ ‘I agree,’ ‘I’m happy,’ ‘I’m enjoying this beer,’ ‘My team is going to win it all,’ ‘I saw that television show, it sucked!’ and ‘That was a clever remark you or I just made.'”  But that definition fails to mention that Arrr! also sounds like “R,” the first letter of a string of very important words… words with which the Reuse Alliance would like us to become intimate and in particular, the “R” that comes before “Recycle”:  Reuse.

What is the Reuse Alliance?

“Reuse” encompasses a whole lot more “R”s, which I plan to have fun with in this post.  But… Read the rest

I’m sorry I never gave you a better name in the 9 years that we were together. I was so sad last week when I traded you in at CeX in Berkeley for a bigger, faster, more powerful computer. For a second, I thought I might jump across the counter and grab you back from that sales dude who was checking all your buttons and parts to make sure you worked okay. I don’t think anyone else has had their hands on you except for Michael maybe and that computer doctor I brought you to a few times when you crashed. See? I loved you. I didn’t toss you away like most people would after two years.

With you, I learned to blog and create web sites and little Flash videos. Remember that stupid animation we made back in 2003 where we knocked off the Governator’s head with a baseball bat? Good times. And better — you were there when Michael and I got married. You helped me make the DVDs we inflicted on our friends and… Read the rest 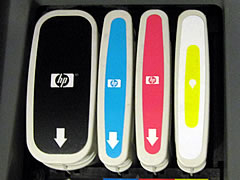 Ah, plastic ink jet cartridges. It’s an ongoing dilemma for someone trying to live with less plastic. My strategy: keep printing to a minimum to save ink and make the cartridges last longer. But after that… I used to have to buy new ones. New plastic. At $40 a pop. (I bought a monster of an HP printer 5 years ago requiring very expensive cartridges. My fault for not doing the research.)

Back then, when I attempted to take my empties to Cartridge World for refilling, I was told that my particular units could not be refilled due to a proprietary chip embedded in the cartridge itself. I would have to continue paying full price for new plastic cartridges and send my old ones back to HP for recycling.

So you can imagine how irritated I was last month to discover that not only were the cartridges not refillable, but the chips contain an expiration date, after which the cartridges will not work whether they still have ink in them or not.  After my diatribe… Read the rest 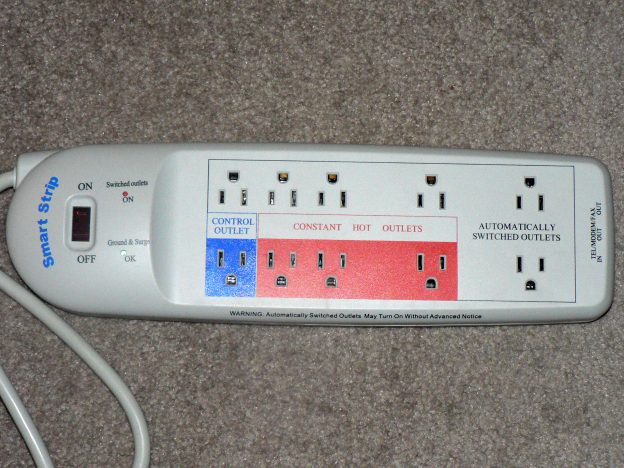 So, at the end of my gloomy post yesterday (yes, I was a little depressed) I said I’d write about some things we’ve done here at Chez Terry/Stoler to save energy. Most of it is either stuff you’ve probably heard a million times (use CFLs instead of incandescent bulbs, use a programmable thermostat, use cold water to wash clothes, open the drapes during the day and close them at night, turn off lights when leaving a room, turn off the computer at night and while out of the house.) Other measures are things I’ve already written about here: not owning a car and buying carbon offsets for the few times we travel by plane or Flexcar, buying very few new things in general and opting for products with the least packaging, buying as locally as possible to avoid transportation energy costs. Other things, like buying energy-saving appliances or renovating our house are not options for us because we rent.

Another energy-saving measure that… Read the rest