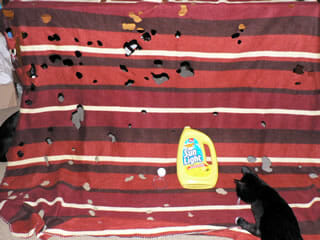 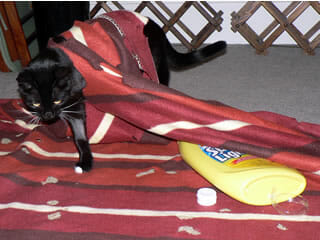 What does it mean when your cat’s poop suddenly turns red? Could be some terrible disease. Or could just mean your cat’s been eating her red blanket and explains why she’s not hungry anymore. I’ve been so worried about poor little albatross chicks consuming pieces of plastic out in the North Pacific Gyre, while here at home under my own nose my kitty’s been chowing down on polar fleece. Look at all the holes!

This is the blanket the kittens came with. I put it in Arya’s cage while she was healing, thinking it would be familiar and comforting. And I guess it was. Comfort food. (Plastic blanket, and god knows what kind of dye it’s got in it.)

Little Hobble had her sutures out on Friday and is getting back to her normal spirited self, which is a little worrisome because her bones will take a while to completely heal. So we still have to keep her in the cage — sans fake plastic blanket!

So, here’s this week’s tally. Plastic items used this week but purchased before the plastic project began:

Only 4 items this week. Not bad! 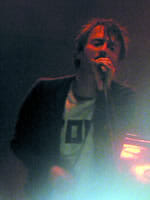 Tomorrow, I’ll report all about the ridiculous search for plastic-free water at the the Outside Lands Music Festival on Friday, and the Radiohead show that pummeled me with its exquisite noise and left me breathless with hope for humanity. (What a world where guys can make sounds that take over my whole body and soul and cause me to weep with amazement no matter how many times I hear them.)

With Ecover and 7th Generation, we learned to only use 1/3 of the amount that we used with regular dishwasher detergent and to put vinegar in the rinse aid dispenser. Even with the rinse aid, 7th generation sometimes leaves residue on plastic items (which should not be an issue for you). BioKlean is the best but like some one else noted, it comes packaged in a plastic jar (and is no longer sold in our town).

Yeah most of the time dishwashers use less water than hand washing. I know people that have there dishwasher empty in to rain barrels or straight in to there garden. I would love to do that someday!

I LOVE the Ecover dishwashing detergent. I have the same box you picture. I love the elegant packaging. And I LOVE that it works just about as well as Cascade, without leaving any grit or scouring my glasses like other versions. Save some money by filling the soap cup with as little soap as possible. Decrease the amount until it doesn’t work and you’ll know how much to use. Their liquid soap is awesome too and comes with pleasant scents.

ROTFLMAO at the blanket! When I first looked at the top photo, I thought it was some kind of photo-realist depiction and wasn’t clear what was going on with the red stripy background — that’s an awesome photo! Well, the kitties should have very clean insides – like a gentle scrub of the lower GI every time they poop, ha ha ha! Beth – I have a ton of baking soda and a box of borax if you want to mix up a batch to try in your dishwasher. I haven’t ever really had a dishwasher — they always seem… Read more »

This is a timely post since I’m about to move into an apartment with a dishwasher! I’m so excited. I never felt like my dishes were clean when I hand washed. And I know they weren’t sanitized, because I never got the water hotter than my hands could stand.

I’ve been using a combo 1T baking soda, 1T borax (can be found in with laundry detergents at the store) in the dishwasher. Additionally, distilled white vinegar makes a great rinse agent. If that doesn’t work for you, another recipe I found online that I intend to try soon is:

1 cup baking soda
1 cup borax
1/4 cup salt
1/4 cup citric acid (which can be bought at a winemaking store, or might even be available in the grocery store with canning products).

We use Ecover dishwashing tablets. I hate them because each one is individually wrapped in plastic! Aaargh. No need to wrap them–it would be no worse than a box of powdered stuff,you know. Anyway, my DH does the dishes and we tried a number of different ones and finally this one and he said it worked the best. He wasn’t thrilled with the idea of trying something other than Cascade, and the first ones we tried sorely disappointed him, so we’ll stick with the wasted plastic.

Another dishwashing tip – if you have a rinse aid dispenser in your dishwasher, you can use white vinegar in it. We have terribly hard water and the vinegar really helps.

Hey, I was looking around the London 2012 Olympics site and it says they are trying to have a “sustainable” Olympics. Didn’t have time to dig too deep, but thought you might be interested. I saw some of the triathalon events this year and wondered at all the plastic bottles they gave to the runners… wonder what they will do in London.

We’ve been using up the last of our traditional powdered dish detergent — a couple more loads and we’ll be trying Trader Joe’s “green” powdered det. We have tried 7th Gen in the past and it didn’t work for us. Consumer Reports evaluated dishwasher det about two years ago — TJ and 7th Gen were about equal overall but scored slightly differently on certain qualities so I’m hoping the TJ det will work (cardboard box, I’ll have to check the spout).

The first dishwasher detergent I switched to was 7Gen’s powder. I did not like it. Left residue on my dishes and they were never really clean. After that I tried BioKleen (plastic tub). I really like the BioKleen, albeit packaged in plastic. I recently ran out of BK and picked up Ecover’s liquid version. It seems to be the best of what I have tried so far. Once it is gone I will give the boxed powder version a go. One tip on loading the dishwasher, make sure to alternate your silverware. Like kinds one up, one down. If you… Read more »

If it’s any comfort, the polar fleece plastic material is probably spun already coloured which means there aren’t any dyes per so to be released…

I think the embodied energy in buying a new dishwasher is the greatest evil. I have never had one, even when in a commune with 60 people… We fill stainless steel bowls with hot water and washing on one, rinse in the other, them throw the waste water on the garden. That seems 100% efficient.

Glad to hear Arya’s on the mend! We use 7G and I just separate the metal spout from the box when I recycle the package. Takes about 10 seconds every four months (I don’t use much detergent). Mostly it’s just because Kroger stocks 7G so I can get it during regular shopping – no special trip required.

Check online for your dishwasher’s instruction manual. That should have instructions for how to best load your particular model.

I don’t know what kind of dishwasher you have, beside Terrilbe Person, but Ed Begley felt he was more effecient than any dishwasher… until he found out that the newer EcoStar dishwashers use less water then hand washing.
I never knew arya was so religous… holy holy holy