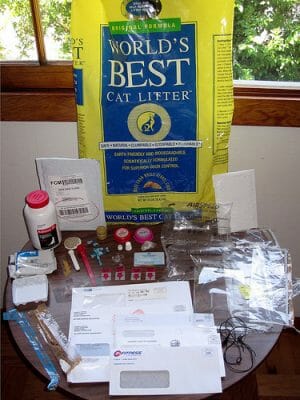 Well, it’s been a month since the Two-Year Anniversary of Fake Plastic Fish, and as mentioned, I’m going to be posting my tallies once a month from now on rather than weekly. So, while this may look like a lot of plastic, please remember that it was collected in over four weeks. Still, it’s more than I’d like it to be, so let’s look at the tally and descriptions to see what was inevitable and what could have been avoided.

Plastic used up this week but purchased before the plastic project began:

As you can see above, the chart looks different. It’s a Google chart which links to the actual spreadsheet. I’m trying to figure out the best way to present this information. I’m not really satisfied with the Google chart. I’d love for you to be able to click on any month and see the photos and tallies for that month. If you know of a program that will do this, please let me know!

In terms of the plastic top on Tom's toothpaste, you can remove the screw threads easily just by grabbing that little jobber with a pair of pliers; comes right off.

I love this idea of rounding up the plastic waste for the month. I need to start doing this. I bet I will discover that I use a lot more plastic than I care to think and…that it is time to make some changes. Thank you for the great post!

Wow! 8oz in a month. I am always so impressed when I see your listing because just the counting of the food plastic has resulted in like 3 times that in a month for me.

My 4-year-old drinks a lot of milk, and I buy it in re-usable glass bottles. I was recently wondering if you drank milk and if so what you do about the plastic tops. I am alternately disappointed that there doesn't seem to be a better option, and glad to know that I haven't overlooked something obvious.

And that's interesting about the bananas. I'd wondered that myself.

Thanks for the info about the plastic wrapped around organic bananas (I clicked on the link). I always thought it was just a way for the grocery store to make it more obvious to the cashier that they are the organic ones.

I feel the same about those stickers and other items that aren't really considered "progress", but make it 1 second easier to find where to sign. Since when was 1 second so valuable to us? This past weekend we had a 2nd birthday party for our son and we got a few latex balloons for him. (Disposed of in the trash- we did not 'let go' outside!) When my husband came home I looked at them and noticed a little PLASTIC clamp on top of the knot at the end! How on earth did we enjoy balloons when I was… Read more »

For the "Sign-Here" stickers, I know what you are talking about since I once used similar stickers in my school books, but I have never seen any. (If you don't count those on your picture ;o)

I dare say that I have signed many forms in my life, but I did not recall to have seen anything other than yellow highlight or, most often, a simple a X written by the person who hand me the form. Or both maybe..

I think the contracts them selves were more simple. You only had to sign in one place. No?

Who needs a sticker when you can just sign on the last page?