I’ll get to October’s plastic tally in a minute, but first, a little story…

I finally got to deduct some items from my plastic collection! Every couple of months I end up with a plastic bottle of Balance IT cat supplement, which we use in our homemade cat food. I’m fairly okay with that plastic bottle because the homemade food is so much healthier for Soots and Arya and because we only go through one every couple of months. Carrying our own stainless steel pot to the butcher shop for ground meat means we avoid all the cans and bags we would have wasted buying processed food.

Still, the supplement automatically comes with two new plastic scoops in each bottle.

Two scoops every two months might not seem like much plastic when you consider that all the scoops pictured up above (from multiple years) only weigh 2.1 ounces. But what irritates me is that just like the plastic scoop you get in a box of laundry detergent, they are totally unnecessary. Who needs new ones with every bottle? Why can’t we keep one set and use it over and over?

I’ve written to BalanceIT but received no response, so last month I picked up the phone and called. The rep insisted it would be too hard to leave the scoops out of the bottle, but frankly I can’t see why the company doesn’t just sell them separately and add them to the order form on the web site.  That way, people who want them can opt in. But no.  And I don’t have the time or energy to push it.  So, changing the way the scoops are sold apparently not being an option, I asked if the company would reuse them if I sent them back. And the rep said yes they would. So today I mailed those suckers back.

I’m hoping he was right and that they won’t just end up in the trash or recycle bin (which is just a roundabout way to the landfill because community recycling programs will not actually recycle stuff like this.) But I think I’ve made my point and will continue to send them back. With that step taken, I’m deducting .9 ounces (the weight of the scoops used this year) from last month’s tally. It’s not the amount of plastic in question here but the principle of reducing waste at the source. Why is it up to communities to deal with trash that should never have been created in the first place? 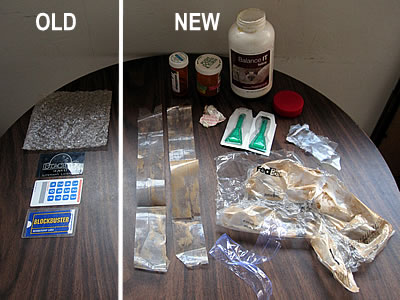 That’s it for last month. If it weren’t for those darned furry beasts in my house, I’d have next to nothing in my tally. It’s their fault. Them and their stupid cuteness. Ooh, listen to those tinkling keys. Arya’s excited by the new piano I got a few weeks ago.  And by new, I mean old. A friend gave me her old one, magic marker decorated keys and all. It’s zero waste and super relaxing, which I need right now as I prepare for the TEDx conference this weekend.

Please don’t forget to watch some amazing talks on solutions to the plastic pollution problem, as well as musical performances and some very cool new videos, this Saturday. I’m speaking some time after 1:30pm PST. You can watch right here on Fake Plastic Fish, or at www.TEDxGreatPacificGarbagePatch.com.

Hmmm… A while back I wrote to dotFIT about the plastic scoop that is automatically included in their protein powder. They said that the scoop was included by the manufacturer and they couldn’t change that. I should write to the manufacturer and see if they would take the scoops back. I end up with one every 2 months or so but I’m not the only person using this stuff on a regular basis and, just like you, I think :who needs a new scoop every time? You’ve inspired me to do some more research into this Beth!

That’s awesome! Also you play piano?? I miss it, we had a cat that loved “playing” the piano haha.

The best part about reading your tallies is seeing how much they reflect my life. I hope you get the good fortune of making a blog soon about reusing the prescription bottles, since it’s so true that there should be a way to recycle them. So sad about Blockbuster, since it’s a good way to avoid having to buy movies, not to mention that Netflix, while great, does require some amounts of paper and waste. I feel for you about the ice cream. Being vegan is extremely hard and turning vegetarian has been hard enough! I wish you luck and happiness with any vegan ice cream options that are waiting to be discovered by you!

I make my own laundry detergent, using soapnuts after reading your column on them, Beth. I love them. As for borax, I have made a homemade powder detergent with borax & washing soda and added the shavings of a bar of grated Chandrika soap. But no more borax for me. I read that in June 2010 the European Union stated that borates including borax are reproductive toxins. I’ve not researched exactly what risks chemicals that are reproducctive toxins do, yet. But thought you all should be aware of this. Many of us have used borax for years. I too love Simply Decadant nondairy ice cream~!

it’s funny how much plastic we need for our cats, when in the wild they wouldn’t use any plastic at all! I want to find a legitimate study of a wild cat’s diet and see where they would normally get these nutrients, instead of from corn or wherever they get them for the supplement. I’m dying to make my own cat food, but I end up buying the stupid plastic bags because they’re cheap and my logic goes: yeah the paper bags have less plastic, but maybe I can make a shopping bag out of the plastic bag (this will never happen and is my horrible way of justifying buying plastic).

I’m skeptical about the supplement scoops, considering plastic is so easily scratched and marred, it doesn’t seem like something they could plausibly (or even legally) sterilize and reuse. but do strict sterilization rules apply to products made for animals? I’m not sure. same thing about your prescription bottles. but didn’t you write about sterilizing plastic 3d glasses? so maybe I’m wrong.

love that you can recycle gift cards, I recently used my sister’s walmart card and didn’t think to ask for it back. I made a big deal about the checker not throwing out the (two) shopping bags she automatically put my single item in (you have to be like a hawk at walmart), and realized when I got home that she probably thought I was crazy since she most likely already threw out the plastic card. I’m hoping they reuse them, I’ll have to ask next time I’m there getting my soul sucked out.

and isn’t your ben & jerry’s carton plastic coated too? it’s hard to resist impulses like that. I amaze myself sometimes, but then I cheat when I can find a way to justify it. I’m terrified to do a plastic waste tally, because I think it would be far greater than I’d foresee. every day I say, I’m gonna start this week! and then I chicken out.

Ah Beth you’re an inspiration. I’m now thinking much more about plastic and there were quite a few comments on the blog on plastic pet bowls saying people were making a change so word is spreading. (Please note Scrubby Bush has now become Kangaroos of The Scrubby Bush). On the fleas I laughed when I read that one. Tried everything natural here – still vacuuming up the Daim earth! Didn’t find Frontline worked but Advantage did. (alas still with plastic). No idea how they even got here as my cats never go out!

Oh, and I premix the laundry soap and keep it ready in the soap flakes bag. Then I can mindlessly scoop.

unfortunately, it’s the MANAGER at Starbucks that gives me the most problems! I have tried calling the company to no avail! UGH!!!

I agree. It’s almost life changing. I had it in a beautiful tent at Burning Man for the first time.

I haven’t had a scoop bother me for many years. If laundry is your culprit, try 2 parts soap flakes, 1 part borax and 1 part washing soda. Use 1/4 cup to a full load of laundry. Works great!

just curious…do you drink coffee at Starbucks? I have tried getting them to use my reusable coffee cup, but to no avail. they still refuse to NOT put that stupid plastic top on!! don’t know what to do, short of stopping my addiction….any ideas?

Hi Heather. I don’t often get coffee from Starbucks, but I haven’t had probs with them using my mug when I do. I wonder if this is a regional issue. Can you speak to the manager?

If you find a solution for the Rx bottles LET ME KNOW. I end up w/ loads of them. Also, you can didp a Q-tip (or something) in rubbing alcohol and MOST LIKELY remove the marker from the piano keys. I say use a Q-Tip so that u can concentrate on just the marker – alcohol is probably not super good for the rest – but they’re probably not real ivory anymore, are they?

Great job with your tally. I am moving into a new place and have to purchase a lot of “new” stuff. Am taking a cue from you and shopping thrift stores and getting lots of stuff from friends who have extras of things that they are not using. And if I do have to purchase new items, I’m making sure, to the best of my ability, that they are not plastic! Thanks for the inspiration!

Purely Decadent coconut-based vegan ice cream is AMAZING. The coconut provides the rich creaminess that satisfies, plus they have awesome flavors. Yes, it has a plastic seal, but it’s 100% cow-and-calf friendly.

Those scoops annoy me, too. That’s one thing I really like about Ecover’s dishwasher detergent.

P.S. You are awesome, and I am so excited that prescription bottles will be up against you now! You’ll do great Saturday.

sending them back sounds like a great solution, I am keeping my old laundry scoops to use in my new mixed by me laundry detergent. and other things like that, scoops are useful but I agree if it is something you buy monthly they are a pain.

Sounds like you just need to try some more vegan treats ;) I LOVE vegan ice cream. In fact, I like it a lot better than cow milk ice cream. I’ve had other (non-vegan) friends say the same, though of course not everyone agrees.

The other day I added some instant coffee to some vanilla rice milk ice cream. I had to nuke it a few seconds and stir, of course, to mix it in well but then it was soooooo good.

In any case, we all have our slip ups, especially when we first start trying to make a new habit. Don’t let it get you down.