The format of this post will be a little different from most of my weekly tallies because I want to emphasize three stories in the news this week which illustrate more of the problems with plastic and plastic recycling. 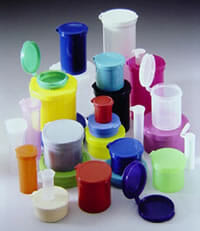 First: I learned from JessTrev of The Green Phone Booth (via Twitter) that one of the few plastics we had thought was fairly safe might not be so. Medical researchers at the University of Alberta have found chemicals leaching from polypropylene (#5 plastic), the type of plastic used for many, many food uses, including yogurt tubs and Bentology/Laptop Lunch containers, which parents purchase as an alternative to disposable food containers for children. Preserve toothbrushes (the kind I use) are also made from recycled polypropylene.

Not enough is know at this time about the two chemicals found to leach from the plastic, quaternary ammonium biocides and oleamide, to determine whether or not the leaching poses health risks, but Rebecca Sutton, senior scientist with Environmental Working Group, says, “We simply don’t want these chemicals getting into our bodies.”

When asked which plastics are safe for food, I’ve always replied that #2, #4, and #5 are the safest as far as we know, but the fact that they haven’t really been studied as thoroughly as other plastics means that we don’t know for sure if they are actually safe. As it turns out, we’re now even less sure. My opinion? Why store food in plastic when we can use glass and other safer alternatives? 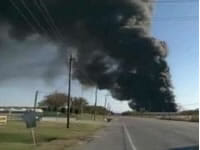 Second: Saturday afternoon, a massive fire broke out at a plastics manufacturing plant in Channelview, Texas. View video and news coverage of the fire here. According to an article on Click2Houston.com, the plant manufactured polyethylene and polyvinyl chloride (PVC) products. Ironically, according to the news story, city officials claim the smoke was non-toxic.

Really? Non-toxic PVC smoke? According to Greenpeace, smoldering PVC gives off hydrogen chloride, “a corrosive, highly toxic gas that can cause skin burns and severe long-term respiratory damage,” as well as dioxin, which has been found to cause cancer and reproductive disorders. How is it possible that the smoke from a burning PVC plant can be considered safe for any town?

Third: Tonight, FPF reader Christy B alerted me to a 60 Minutes story that aired today revealing a terrible reality of electronics and plastic “recycling” that will turn your stomach. You already saw the Sky News story about plastic recycling in China. This one is even worse. Watch it below or view it on the 60 Minutes site. This story illustrates why cutting our consumption and requiring manufacturers to produce less toxic, longer-lasting products is essential.

Watch CBS Videos Online
And now that you’ve had your fill of reasons to cut out plastic, here’s my tally for the week. 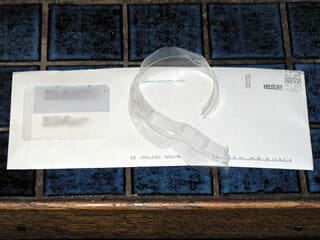 And that’s it. I actually did also receive a free T-shirt in a bubble mailer with plastic tape, but I returned it to the sender after sending an email explaining why. I also received one of those plastic pizza inserts, but I’m planning to take it back to the pizzeria and ask them to reuse it. It’s actually unnecessary. I usually remember to request no plastic thingie, and the pizza arrives just fine.

We bought our kids Klean Kanteen Water Bottles at this company . All the BPA stuff.. just kind of freaked us out, why take chances?? It helps the environment, and is safer for you… so its a win, win.

Whew, sorry if I sounded really snarky! I was frustrated. I'm working full-time & a newly single mom. I feel like I'm doing all I can and it's still not enough. I will check out the alternatives you guys mentioned. Note that even the metal containers I've seen have plastic lids. Things that still go in plastic are mostly wet things: baby oranges, baby carrots (I know, I know!), applesauce, the occasional pickle or (homemade) pudding cup. The baby carrots or pickles usually go in a disposable plastic baggie (horror!) because I don't have a reusable container that is the… Read more »

Froghair — you have convinced me. And in fact, that little plastic pizza thingie has been sitting on my desk for several days mocking me. So I will add it to this week’s tally and perhaps I won’t forget to specify no plastic next time! The T-shirt, on the other hand (which you didn’t mention but which I feel obliged to expound upon now) was not my fault. I specifically requested that the sender use no plastic including plastic tape to send it to me. And the sender used plastic anyway. So I marked it “return to sender” without even… Read more »

Pardon my skepticism, but do you really think the pizza place is just going to pop that plastic thingie back in their bin and reuse it? Frankly, I hope not, because that's got to be a health code infraction, even if it is washed. Or perhaps I am uninformed — does the pizza place have a return & reuse program for these thingies? Beth: so great is my respect for you and your work, I am reluctant criticize, but I think that if you cause the demand for a plastic item, it needs to get tallied in your count. If… Read more »

Birthblessed — ha! We have two ice cream makers. Chunky Monkey is not actually a habit. It was an election night impulse. And, in fact, it was the first time I ever tried that particular flavor. How have I lived for 43 years without knowing that banana ice cream is yummy? I guess I was an ice cream bigot before, assuming that if it wasn’t chocolate, it wasn’t really dessert.

You know, you can get an ice cream maker, dear, and bust the Chunky Monkey habit.

Oh, just ordered from http://www.lifewithoutplastic.com stainless containers for my kids lunches. Had been sending kids to school with glass, but finally got complaints from school. These items are plastic and glass free. I also bake quick breads that they take to school wrapped in waxed paper just like my mom used to do in “the good ole days”. Same with sandwiches. Also, bought mismatched cheap flatware from salvation army that the kids use in their lunch boxes and bring home … but if I lose one, no biggie. Hope this helps. -Sandy

Just ran into your site. Fabulous. The plastic issue is sickening. I love your idea of tallying your plastic “consumption” – brilliant. I’ve pretty much gone to all glass or stainless. I saw the 60 Minutes empisode … infuriating. I felt betrayed by the recycling folks. Sad. My understanding up til this point on #5 plastic is that it’s “supposedly” ok if you don’t put it in the dishwasher, microwave it or put hot foods in it, or when it gets really old and scratched it leeches. In my book this means: unsafe. Finally we are getting somewhere on the… Read more »

Wow, scary news on so many fronts. Almost like a snapshot of why we should limit plastics use. You know, a while back – you may not remember this – I emailed you to see if you’d figured out alternatives to plastic bandaids. I was so surprised when you said “I think that is a perfect use for plastic.” Since then, it’s helped me to frame my plastics use in that way. Is this a good utility of plastic (a possibly dangerous, polluting substance)? Or can I sub something else in pretty easily? Right now I’m shooting for low hanging… Read more »

Beth, you always bring us back to the important stuff. Thank you for keeping plastics front and center.

I’d love to find a plastic alternative for packaging foods for lunches. The metal ones just don’t work as well, are tough to open and glass can get thrown and broken.

Heather and Maya, I hear you! I’m sorry if I made it sound easy to give up plastic, and I’m sorry if sometimes I forget how hard it is when you have kids. But I think Maya is right. People sent their kids to school with lunch before there was plastic. Heather, what is is that needs to go in a plastic container? Let me know, and I’ll see if I know of an alternative. To-goware.com has started selling very small stainless steel containers: http://www.to-goware.com/store/cart.php?m=product_detail&p=49 They are good for small portions of snacks. You are already using cloth napkins and… Read more »

oh, Heather, you sound discouraged. you know, I’m so glad you are taking the steps you are already taking! Remember, though, kids took lunch to school before plastic was invented (in a tin can covered with a cloth, for example) and they can do it again. My kid doesn’t, but I use metal bowls w/plastic lids and a metal thermos for hot food. No one is perfect, we just have to keep trying. Beth–such discouraging news. I don’t know. I think I’m discouraged too. I just remind myself that I care, I have children who I want to inherit a… Read more »

So what would you recommend we pack kids’ lunches in? Glass?

Sorry if I sound snippy – I don’t mean to. It’s just very frustrating to be told “there’s no reason to use plastic” when, darn it all, there IS.

I’m doing my best to get plastic out of my kids’ lunches, but it’s hard. Our school doesn’t offer hot lunch, so we have to pack. They have thermoses, I’m wrapping sandwiches in cloth napkins and dry snacks in little cloth bags, but some things need reusable plastic. There’s no getting around it.

I can’t believe that they would say that PVC burning is not toxic? What are they smoking?

As for the computers in China, Mother Earth News wrote about this at least five years ago, and it broke my heart to see a young boy on top of all our AOL discs and computer crap.

A third thank you for the 60 Minutes reference. We all should pass the link around widely. The smiling, cooperative, friendly guy who is “just like us” is as much a villain as the squawking guys trying to grab the camera in China. They hide what they do with the threat of violence while he hides what he does with a smooth style. The heroes of the story are the producers of the show who decided to take the time to investigate and the faceless folks in Hong Kong who caught the shipment of CRT’s and sent it back. The… Read more »

Thanks for bringing the 60 minutes segment to our attention. It was simply heartbreaking.

I saw the 60 Minutes segment. What was appalling was how complicit the American reycler was. Up to this point I assumed either they were recycling it here, or they didn’t know it was being sent overseas, or they knew it was going overseas, but thought it was being recycled there legally and safely. I was pretty mad when I saw the cavalier attitude and the lies, right there on camera.