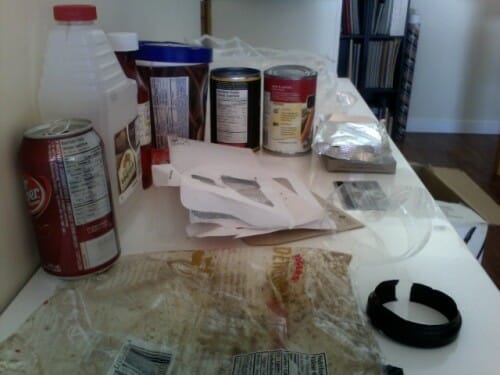 Anyone out there make their own pizza and have a good dough recipe to share? It’s my next big project.

I am secretly this Natalie from Texas, who is now moved to Vancouver for grad school. I noticed that it is much easier to recycle here, and to find food without plastic waste, and is generally greener than Houston, so I wanted to re-take the Challenge for a week and see how my plastic waste is different than before.I live in a one-bedroom apartment on the east side of town and bus or bike to UBC on the west side. This semester I am living mostly alone, so all plastic is mine.

Items: Recyclable
can of Dr. Pepper
can of coconut milk
canned peas and carrots
apple cider vinegar plastic bottle (#2)
cough syrup bottle (#1)
four plastic envelope windows (they can be recycled with the paper, but I don’t know what happens to them)

Items: Nonrecyclable
lid from ACV
lid from cough syrup
ice cream carton
bag of brown sugar
two plastic seals from around glass bottles
old credit card
four(!) frozen pizza packages
tape on the cardboard box around some chocolate
faux-foil from inside the chocolate box. I assumed it would be aluminum. Oh well.

What items can I easily replace with plastic free or less plastic alternatives?
I usually buy ACV in a glass bottle. I think when I bought that last bottle I was in a hurry or something.

For canned items, cans of tomato paste/sauce and cans of coconut milk are staples for me, but I don’t usually have canned vegetables, and I am even trying to cut back on canned beans and other items and simply cook from scratch. I inherited some from a friend who moved though, so I am slowly working my way through them. I’ve pretty much quit cokes, but once every other week or so I’ll go buy a Dr. Pepper. Old habits die hard.

Sometimes a person needs some chocolate, but eventually I’ll find a plastic-free brand.

What items would I be willing to give up if a plastic free alternative doesn’t exist?
Gummy bears. They were offered and I took some without thinking about the challenge. Individual candies are never a usual thing for me; only a treat.

What items are essential and seem to have no plastic-free alternative?
Cough syrup. It was a prescription, and these always come in plastic bottles.

Plastic seals around bottles. Out of my control.

Bandaids? My finger is infected, so I was trying to keep it clean and slathered in Neosporin. Are there still cloth bandaids? (Are cloth-looking bandaids really cloth?)

I buy sliced deli meat and cheeses from an amazing grocery store up the street. They wrap it in paper, but of course the bar code is a sticker they print out and slap on. I don’t mind this because it’s way less plastic than it otherwise would be.

What lifestyle change(s) might be necessary to reduce my plastic consumption?
It’s funny, but the piece of plastic waste that has always bothered me the most is plastic trash bags. Maybe it’s because it’s something that gets thrown out weekly. It seems like such a waste! In Houston I went far enough that I bought composting worms for food waste and used a paper bag as a liner in my trash can that I would simply dump into the big dumpster outside and reuse for months until it got icky. I loved my worms but couldn’t move them across country, so right now we are back to plastic bags.

Frozen pizzas are my convenience food of choice, but they always come packaged in plastic, which does bother me. I don’t usually go through four in a week, but I got lost in working and in writing and scarfed them down so that I didn’t have to get up and go shopping. The eventual plan is to learn to make pizza dough like how I make my own bread. That way I can make two or three pizzas at a time, bake one, and freeze the others for later.

I have been avoiding buying brown sugar for the longest time. Is it always in plastic? It seems like it to me. I finally caved because I wanted some oatmeal done right (which is to say, with butter and brown sugar).

I know there is plastic in the ice cream, but I don’t think I’m willing to give that up.

I’m also pretty sure I’ve seen Beth mention places one can send bottle caps and credit cards to to be recycled, but I didn’t (and don’t) do that. There’s another area I could find a solution to.

What one plastic item am I willing to give up or replace this week?
In fact I’m on the last plastic trash bag in the house. I am pretty sure there are green composting bins out in the alley, so once that is full I think I’ll try keeping a coffee can of food waste on my counter and emptying it into the bin every few days or every week. That will allow me to use a paper bag as a trash liner again.

What other conclusions, if any, can I draw?
The two weeks I took the challenge in Houston, I feel like plastic waste just kept creeping into my tally. It was as if every week had 20 items that weren’t “normal” but also couldn’t have been avoided. And when abnormal plastic happens every week, it’s… well, normal!

But here I somehow have much more control over my plastic. This feels like a pretty normal week for me, and it’s half or less of the amount of plastic I would generate in Houston. Shopping plastic-free is easier here too.