Before I show you this week’s tally, I thought I would give you an idea of what I’ve been hoarding since June 17, 2007. This is all the non-recyclable stuff I’ve collected through last week. Click to see a larger image: 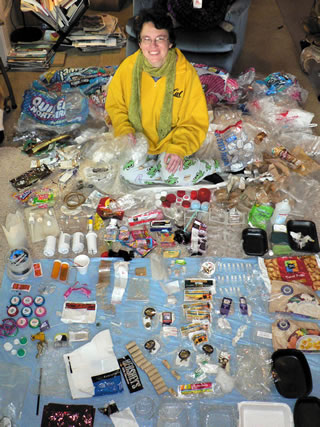 I feel like 2008 is a new beginning. I have a better idea of what I’m doing and why avoiding plastic is a much better alternative than recycling it. Which is why this year, as I said previously, I’ll be saving all the recyclables too. There are still plastic items I can’t do without, like prescription bottles (which can’t be refilled in California. Even my vet won’t take them.), eye drops, and cat food. But I’m willing to lower my cheese consumption considerably. This will also help with my New Year’s Intention #2.

That said, here’s the plastic tally for this week. Yes, there are cheese wrappers, and there will be more for the next couple of weeks. My sister sent me some awesome Vermont cheddar for Christmas. But after that’s gone, I’m slowing way down. 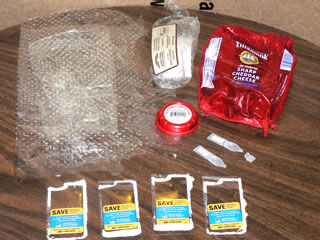 This is the very first week that the tally consists of only new plastic waste:

Wow I’ve not really thought about how much plastic my family uses. I am going to make an effort to reduce!

If you can find a plastic free source for milk, perhaps you could make your own cheese. I’ve been wanting to try that ever since I read Animal, Vegetable, Miracle. It sounds fun. And tasty.

Yikes! That is a lot of plastic. I’d hate to see the total for someone who is oblivious to the plastics problem. But I know your work has made a lot of people more aware of the issues and encouraged them to reduce their plastic consumption too.

Beth, that picture is very interesting. I have been doing Weight Watchers and walking my new dog (got him in August). I have lost 23 lbs since then and can’t believe how long a brick of cheese lasts! I too feel your cheese pain but remember a serving is 1 oz. Just one little ounce. If you keep that to 1 or 2 servings a day it lasts a long time – even if the significant other eats more than you do. I used to get cheese from a local dairy at the farmer’s market where they would just cut off the amount I wanted and wrap in paper or put it in my container. I know you have blogged about this issue before, but I don’t remember if you had looked for a cheese maker at your farmer’s market.

Cliff, you are right, camping gear is mostly plastic these days. We hike and kayak, camping during both, and plastic is just assumed. You could use aluminum cooking and eating ware, aluminum water bottles, and pack your own trail food in paper bags. You can even get much of it at a sporting good store unwrapped. You can get canvas tents, but if you backpack or kayak you will have a hard time using those due to space and weight issues. Of course people were climbing Mount Everest and sailing the Amazon without plastic, so it can be done.

Beth, your posting time indicates you are up at 3AM. Get more sleep, kiddo, that is unless you get up at noon. :)

Here is a challenge: to make do without plastic while tent camping. Plastic has made camping so much better, with tents, backpacks, sleeping bags all made with the stuff…even the insulation is plastic. How do we draw the line on plastic when there are so many things it does so well and for which there are no good substitutes?

The other day I found some biodegradable shipping popcorn on the street after a rain. It was gooey and slimy as it was in the process of breaking down. That’s a big plus, because shipping popcorn is so small, so likely to be blown everywhere and potentially eaten by wildlife.

Wow! That’s a whole lot of plastic. I’d hate to think what it would look like if I saved all of ours because I’m only just becoming aware of how bad it is. Very inspiring, Beth. Thank you for sharing. You are making a big difference here as your readership and consequently our awareness grow.

SO what is the average consumption of an American, anyways? That looks like a lot of plastic around you, but I have a friend who throws out that much in one week, sometimes more.

I think you are doing a great job, and I agree with raw vegan mama that you are an inspiration.

Thanks for all your hard work!

Hi Beth,
Thanks so much for all that you put into your blog. I am new as of a few weeks ago (via 365 days of trash). I have to admit that I kepth checking in this past weekend looking for new posts, and there weren’t any. But then I would click around and find all sorts of new information via the links that you’ve added. Your blog has so much information in it and I really appreciate how much time and effort this must take you to do all of this.
I don’t know if I have the answer to your “cheese problem” but this might be worth a try. Go to your local deli with a reusable container and get a chunk of cheese from them, but before they weigh it, they can zero out the scale with your container on it. is that legal where you live? Also for milk – do you live anywhere near anyone who has a cow and who sells raw milk? Again – bring your own “jar”. Raw is better for you anyway! Here in New England we have milk that comes in cartons without the unnecessary plastic cap. They say the package is recyclable but I havnen’t investigated that.
Again – thank you for all of your effort and sharing your experience with us. We all can learn something from each other!
All the best,
Molly in New Hampshire

Here is my 2008 challenge to my clients.
It’s also my email signature.

The End of The World of Plastic 2008 Challenge

SPECIAL OFFER:
Every month that you bring me a list of at least 10 ways you’ve eliminated plastics from YOUR life, I’ll give you a reusable, handy, beautiful, ethically made, recyclable Chico bag to use or give as a gift.
List 10 items you’ll no longer buy, and what you’ll buy instead. For example:
Bad Better Best
1. tampon, plastic applicator tampon, no applicator Diva Cup or The Keeper
2. soup in can or plastic bottle soup in mason jar make own, reuse mason jar
3. brand name cleaning product Nature Clean concentrate Nature Clean in bulk, refilled
4. onions in a plastic net loose onions, in reused bag

Here’s where I get my vegetable cellulose bags from:

I don’t sell for them, I just thought you and your readers might want to know about vegetable cellulose, and could use some instead of plastic if needed.

I, too, am attempting to eliminate plastic from my life. Unfortunately, my food coop bags all bulk items in plastic to reduce shrinkage. And you know there’s no way in the city to buy meat not in plastic. I’ve decided to forgo fancy tofus in plastic for bulk tofu I package myself, but as a natural health practitioner, I am stuck cycling through a lot of packaging. I do my best. I freecycle bubble wrap for instance, and package only in vegetable cellulose.

Thanks for your blog. If you send me your email address, I could send you my anti-plastic newsletter.