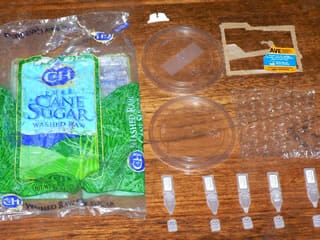 We are besieged! It’s been raining non-stop for days and days, and what that means are hordes of ants running for cover. Our kitchen is over-run. I mixed up an anti-ant spray using vinegar, dish soap, water, and cinnamon. The vinegar and soap kill them. The cinnamon’s supposed to keep new ones from entering, but it doesn’t seem to work. Why am I mentioning this? Because of the first item in this week’s plastic tally:

Non-recyclable items used this week but purchased before the plastic project began:

Now for the new plastic waste:

So what’s the weather like where you live? Rain? Cold? Snow? Wind? Or balmy, tropical days? What are your winter challenges and do any of them involve plastic?

We have a cooler than usual summer here and more rain than we have had in over four years! For this we are very grateful. Ants are an issue here too – mainly in summer. I keep my sugar in glass jars with rubber seals. I sit any wet, sugary thing in a dish of water in the cupboard (eg. honey, sweet chilli sauce, etc). I line the edges of the food cupboard with bay leaves (fresh or dried), which stops them but the leaves need to be replaced every two or three months (compostable, no drama). I have a… Read more »

P.S. Off the subject of ants but which presidential candidate do you think will have the best environmental policy? And actually put actions behind their words?

Hi Beth- I feel your pain! I went to Puerto Rico over Christmas in 2004 and when I returned home there was a line of ants in perfect formation starting from the window in my bathroom all the way down hall and into my kitchen cupboard. I nearly died of heart failure when I opened the kitchen cupboard! They were EVERYWHERE!!! They had 3 weeks of uninterrupted feasting and had practically taken over the whole kitchen. This was a serious infestation… Anyway, I went to the nearest convenience store and bought a can of Raid which I do not recommend… Read more »

Horrible! The weather in Chicago is horrible! In the past week it snowed at least a foot total, and then it started thawing today so there are huge puddles of water everywhere. Also, it’s so foggy you can see the clouds spinning around you in the street lights. Resulting plastic challenge: I didn’t know there was going to be so much water on the ground when I left the house this morning so I stepped in lots of giant puddles in my sneakers. Well, my left sneaker is starting to come apart, actually, so tons of water got into my… Read more »

I’ve also used vinegar & water spray to clean up after the ants and it does work, but it also takes a few days, like your other poster said. We get them for a few days in the spring when the temperature hits about 50-60 for the first time (or two). Winter in Michigan is snow, damp, rain, clouds, etc. It has been SO cloudy and gloomy this year. It keeps thawing and freezing. We get 6 inches of snow, then it melts. Plastic is a huge problem in winter because EVERYTHING is either made of plastic or comes in… Read more »

Hi Michelle. It’s my understanding that LEDs will be even more energy-efficient than CFLs without the dangers of mercury. That’s what I’ve been reading. So I’m hoping that by the time our CFLs burn out (and I’m hoping that will be a long, long time), there will be lower-cost LEDs that we can use instead of buying new CFLs.

Beth, as always, I love your blog! You are really great at explaining your reasons for your choices. So I’m wondering, why are you switching from CFLs to LEDs? Is it because of mercury?

Try a solution of white vinegar and water to get rid of the ant tracks. If you see an ant – spray the area. Also the places you know they’ve been. In fact, just spray or wipe the whole kitchen with the solution. It may take a few days for them to give up.

If you have borax (I doubt it’s available plastic-free), mix with water and sugar for a trap.

BTW: loved your split-pea soup recipe. I blended it up, absolutely yum.

You can get Diatomaceous earth. But I don’t know if you can get it plastic free. It works really great to get rid of ants. One year we had them crawling all over our play room, they had infested the wall BIG time. It still creeps me out.

Its rainy on this side of the bridge too so the ants keep coming. I’ve heard 2 natural solutions: 1. Put bay leaves around your kitchen & especially the entry points. Ants hate bay leaves and won’t cross. 2. Corn starch – same concept, sprinkle around the kitchen. They eat it but can’t digest it properly so it gets rid of them. Not very humane but might do the trick. Good luck!

Hey Beth… I think you’re in for more trouble by putting the sugar under the sink… this is going to attract many more ants who will then look elsewhere for food. When I lived in North Dakota we had an ant problem and we used this liquid solution that we dabbed on little pieces of cardboard that we then distributed all around the areas of infestation. Unfortunately, I don’t know what the stuff was called. I can try to find out for you. But I really think the sugar is going to increase your ant population exponentially. Perhaps I am… Read more »

blech. we have ants here at the office. they’ve over taken the kitchen areas and bathrooms and even my desk last week! Allie brought in this spray…it smells like oranges and it seems to have done the job. not only did it kill the existing ants, it prevented new ones from emerging. she says it’s something about the orange scent that kills the ants trail or something? anywho, it worked. we heard the other center has a lot worse than ants though! yuck!

OH Beth, those ants are aweful. We have the same problem and even with the boric acid traps they keep coming. I freeze my compost (until we dump it) so they are less attracted to the kitchen but they are nearly impossible to eradicate here as well. Doesn’t help that I have a leak in my roof (in Salem OR) and the wall is wet! Anyways, good luck and I feel your pain.

Cold, Cold and …uh, freezing my butt off cold. Most of the last month we’ve had below zero temperatures. Last week the kids got out early from school one day and had no school another due to blizzard conditions. This weekend warmed up to the 30s (Fahrenheit) but now we are supposed to have freezing rain today. But I’m not bitter about the cold…maybe…just a little… My winter plastic/trash goal: I am ramping up for the “birthday season” at my house and don’t want to use wrapping paper or tape. (Everyone’s birthday falls into the span of March-May.) I have… Read more »

The only thing I’ve found that helps with the ants is being crazy stupid clean. No wet counters even. Dry everything, even the sink. It helps…some. Then they’ll find the cat food…

Foggy here right now but it’s supposed to be a very nice day in the 60’s and then snow tomorrow. The joys of the midwest!

My anti ant solution is powdered borax. It also works mixed with peppermint toothpaste. It’s supposedly a line they won’t cross. Steel wool in holes and crevices is also a natural barrier, at least to larger critters. I have always kept all foods in mason and glass jars owing to the need to keep mice and moths at bay. I can’t bring myself to weight or measure our plastic waste here, but nearly ALL of our garbage is plastic. My basement tenants produce a big garbage bag of “recyclable” plastic every two weeks. I shudder! Our biggest challenge is that… Read more »

i read that baking soda is an ant remedy. you just sprinkle it on the areas where you’ve seen the ants. you might try it along the baseboards of your cabinets or where the countertops meet the walls. i’d dust the whole area at once to encourage them to move to a new home rather than just a new area of your kitchen. i’ve tried it on my outdoor porch. it works for a couple weeks, then they return and i dust and chase them away again. (it’s rainy here too which puts them in a roaming mood.)btw, i follow… Read more »