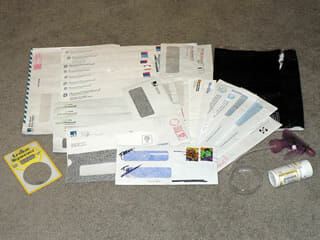 I give up. You’ll see why below…

Plastic items used this week but purchased before the plastic project began:

That’s all for now. Be sure and tune in tomorrow for the 3rd monthly Carnival of Trash, which will be hosted right here.

I meant to write that you can paste the edges of each window to another window until you’ve created a faux window big enough to fit over a real window et voila, u have a privacy screen.

Using homemade wheat paste, you can stick the edges of each windows to another, continuing to do so until you’ve reated a faux window big enough to over fit a regular window, et voila! You’ve made yourself a privacy screen.

I have told Fake Plastic Fish Terry over and over and over that cinnamon, when mixed with water, turns a gel-like consistency and is very, very difficult to remove. I am simply appalled that u tried to force it thru an innocent sprayer.

I have formed a new group for superheroes – I call it Rescue Rangers – Plastics Division. Of course there is only me right now but I am hopeful as I scour my neighborhood “rescuing” plastic bottles and bags that others may also dress up in caped outfits and join me. If Beth can be a Brita filter, anything is possible! I am also trying to make my feet tiny (ecological footprint will be smaller) by turning down the volume of water at the tap when washing dishes, using only cold water for washing clothes and using only the front… Read more »

I also used to get a tremendous amount of junk mail from Planned Parenthood, more than from any other organization. I finally decided that if this was how they were going to spend their resources, I didn’t want to be a part of it. So I now contribute to Marie Stopes International instead.

FYI… Wells Fargo now has envelopeless ATMs. You can stick your deposits in w/out any envelope at all. :) Just in case anyone was wondering… :)

Maybe a more local, smaller bank/credit union than ING direct would be perceptive to your suggestions?

Since prescription bottles are reusable by pharamcies, can you find a good reuse for them at home? I use them to sort craft supplies (I got a lot of beads from a woman when she passed) and of small things like screws, etc. in my toolbox.

Hmm… I wonder if you could just leave your collection of envelopes in the pile of envelopes the ATM provides?

(I don’t, sadly, get to deposit as often as I get mail)

I found a re-use for envelopes that makes me happy. They used to pile up because I rarely mail things.

I pop them in my waist pouch purse for making deposits at ABMs. That way I don't need to use one of their new ones. And when I am really on the ball, I pre pack my signed deposits in the envelope and put the total on the front.

This makes me happy.

One of the things that burns me up about those plastic windows in envelopes – they also come from the government. I’ve been on a letter writing campaign recently regarding the environment and education. Here I am using recycled paper and envelopes and what do politicians do? They send replies in envelopes with plastic windows! Even when I try to explain that plain, recycleable envelopes are best, they still use plastic windows. I received 13 such envelopes last week alone! No wonder every day citizens don’t try to reduce their use of plastic when the government doesn’t. Change is supposed… Read more »