2009 is over. Another year of collecting and tallying my own plastic waste. Turns out, my total 2009 plastic collection  adds up to roughly 4% of the national average. Really. But I’ll have much more on that in a special post on Monday. This post represents the last bit of plastic waste generated in 2009. It will be short because today finds me in this condition: 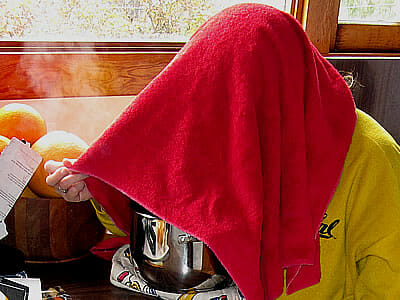 Just trying to clear my sinuses with eucalyptus steam and get rid of the blinding headache I’ve been carrying around for the last four days.  Are you tired of hearing me kvetch yet?

Plastic purchased before June 15 2007 and used up in the last half month:

man i think it would take me a year to figure out all the plastic i used this year. ..
maybe 2010 is the time to step it up?

Congrats! And I am so sorry you’ve been sick. I’ve been there too this week…

When we returned home yesterday from our long holiday travels, I received the lovely package of cream and lipbalms. Luscious!

Congrats on being below 4%!!! The GImme Five program hasn’t reached whole foods in Seattle yet, So I am taking on recycling large medicine bottles myself in my Etsy shop where they become dog poop bag holders. The smaller ones might beocme Sewing or first aid kits! LOL, who knew!

I was recently surfing for a recycling idea for the tins my favorite tea comes in. I came across an article you had written on “more” uses for baking soda… Having seen numerous ideas for using baking soda in the home, I expected to be less than enlightened. And admittedly, there were the usual suspects. However, when I saw the fabulous little shaker you use for the baking soda, little lightbulbs started flickering all around. I now have baking soda filled tea tins, holes punched in the lids, at the ready in my kitchen, bathroom, pantry. I’ve also decided to… Read more »

Happy New Year! :) I feel your pain… I’ve been sick too and it really sucks! I’m getting tired of feeling lousy and being cooped up all day! I hope we both feel better soon!

Congratulations on making it to year 3! WOW!

Beth, Happy New Year! I saw that Nyquil bottle and thought, “Uh, oh, Beth’s been sick!” Hope you are on the mend very soon. Wow…I see the beginnings of another campaign….the local Sierra Club reduces more plastic than the national? (Or at least in its mailings….) Interesting…. And I wonder the impact of all of the non-profits collectively, all of the letters collectively…Some would say we have “bigger fish” to fry, but I think it does all collectively make a huge difference. Thanks for all you do! And if you keep eating so much ice cream, you’ll be eligible to… Read more »