Yay! The total weight’s back down again. But my plastic still doesn’t fit in the palm of my hand. Maybe this week coming up?

Before I get on with the tally, here is a PVC update and a local Deal Alert:

First, the PVC update: As you know, I found four bottles in my house made from PVC a couple of weeks ago and had determined to find out if the products are still being bottled in PVC or not. The hair gels are, so I sent them back to the company with a letter. No response yet. I can’t find the La Paila dulce de leche sauce in any stores around here (I think it was a close-out item at Grocery Outlet) so I’ve sent an e-mail to the manufacturer asking if the product is still bottled in PVC. And today, during my travels, I found Sun Luck toasted sesame seeds at Piedmont Grocery in a #5 polypropylene container. Since this company has already made the switch, I won’t bother sending the container back. Instead, it goes in my hazardous waste stash (per National Geographic’s Green Guide) waiting for the next time I visit our hazardous waste facility.

Local Deal: Speaking of Grocery Outlet, I was in there today looking for the dulce de leche sauce. I didn’t find the sauce, but I did find a huge stack of Desert Essence calendula and lemongrass soaps wrapped in nothing more than a minimal amount of paper for 99 cents each. I can’t find this soap on Desert Essence’s web site, so I have a feeling it’s a discontinued item. If you want to stock up on a natural plastic-free soap, now’s your chance. I found these in the store on Broadway in Oakland. I don’t know if other Grocery Outlets carry it or not.

And now for the week’s tally:

Non-recyclable items used this week but purchased before the plastic project began:

Recyclable items used this week but purchased before the plastic project began:

And that’s all the old stuff. Now for the new plastic waste.

That’s it for the week. 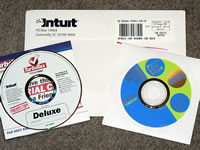 And here’s some plastic I received this week and will be sending back. Intuit automatically sent me this year’s Turbotax software on CD, along with a bonus CD of financial something-or-other. But Turbotax is available for download. So I’ll be returning these CDs with a note asking Intuit not to send me anymore automatic plastic through the mail.

Have you all checked out Burbanmom’s web site, Going Green? She’s been sending things back, too. And writing letters to the editor. Let’s make this a trend!

Thank you for leaving a comment on my blog about yours. Your “list” is extremely helpful, especially the side bar with actual products that are available. I am so glad to find that others live “plastic free” and I am so grateful that you and others have documented your experiences! Thank you!

Oh, Axelle. You little troublemaker. Actually, that issue has already been dealt with in a couple of posts here:

And Michael doesn’t eat much yogurt… it’s cottage cheese that was the issue. We’re looking into making our own. But regardless, I don’t tally Michael’s plastic. He’s his own man.

What about Terrible Person and his yogurt consumption? Is this something the faithful readers of Fake Plastic Fish should know about????

Beth… Regarding your TurboTax order, I suspect that you signed up for Automatic Renewal. If so, you can modify your preferences/order by visiting https://ttlc.intuit.com/questions/1901492-what-s-the-advantage-of-turbotax-advantage.

I applaud your efforts to reduce waste by downloading your software.

Here in Akron, we can only recycle plastics 1 & 2. How do we move our elected officials to collect the other plastics?

Also, do you have any tips on recycling non corrugated forms of cardboard? We must throw all that into our headed for a landfill trash here.

pssst…do you know how easy it is to make your OWN dulche de leche sauce totally plastic free? i made some last night and they are in the cookies i brought for you today (although…i think the cookie part turned out terrible..not by me…but the recipe itself was just bad). also i found a thing i wanted to talk to you about concerning your hubby’s yogurt consumption. i’ll talk to you about it while you’re here visiting today!!

Just an FYI. Our Grocery Outlet in Salem Oregon has the same soap.

I love your attitude!

Hey Beth! Thanks for the link! I’ll keep it going on my site and we’ll see if we can get a plastic-returning, letter-writing riot going! :-)