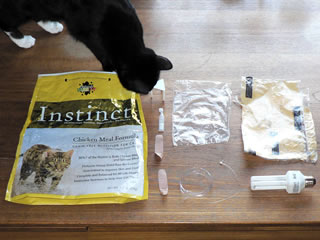 Back to dealing with plastic. I wonder if it’ll be another whole year before I have a second plastic-free week.

Plastic items used this week but purchased before the plastic project began:

New plastic purchased since the plastic project began and used this week:

Okay, gonna be more careful this week. After all, I have enough dessert toppings to last for a while. What else could I possibly need?

Waste reduction is my interest, especially with regard to landfill in the UK. I am aiming to use 1 bin bag over 3 years. 1 particular problem is toothpaste tubes. Do you have a practical alternative which wont destroy my teeth and gums?

Glass jars, steel wool, baking soda and lemons rule my life. I like canning jars because they have a separate ring and lid. When the odor of, say, garlic pickles permeates the lid, I wash it and put it out in the sun for a couple of weeks to air out. I’ve got plenty of lids to replace it. If rust accumulates on the jar ring, I rub it off with #3 steel wool. Bubbie’s pickle jars are great because they are tall, have a wide mouth, straight sides (e-z cleaning) and hold a lot without taking up much space. I love rooting through recycle bins the night before trash pick-up, looking for nice jars shhhh

I eliminated the need for plastic pizza thingies altogether by making my own pizzas instead of orderng takeout. I make pizza dough in my breadmaker and freeze at least one batch. That way I always have a pizza dough made with healthy ingredients on hand when we want pizza/a quick meal and eliminate the need to try to recycle greasy pizza boxes.

I store leftovers in glass jars. I reuse ones food came in. I did buy a set that are smaller canning jars because they have the wide mouth lids. Starting doing this after Axelle showed me her fridge last summer. It looked so organized. They also take up less room in the fridge. I use them to freeze items also.

i’m curious about how you store leftovers. we’re a family of 4 and while i’ve left plastic wrap behind it’s been tough. i’ve spent the majority of my entire 40 years with a roll of the stuff in the house…. now what? i have storage boxes but short of mortgaging the house to buy enough glass boxes to keep us set i’m stuck. i’m sure the answer is fairly simple but for the life of me i can’t get past those sheets and sheets of clingy plastic…. help!

ive noticed you mention those plastic pizza thingies too and like brigid said, i was also thinking, i havent seen one of those in years either. i also live on the east coast. …i also havent ordered from an mainstream places (i.e. pizza hut or dominos) in years and maybe that has something to do with it?

Re: Plastic Bags for Shipping Labels

I believe that shipping firms (UPS, Purolator etc) require the shipping slips in those dreaded baggies. I haven’t tried demanding that they leave them off, because I don’t ship that way. I can picture someone on the other side of the counter just grabbing my package and slathering it with plastic.

It’s worth asking them to knock it off, though. I had a plastic-free shop at a small bakery/deli in the neighbourhood. The lady didn’t blink when I asked her for the ham (for my omnivorous daughter) in paper.

You know, I didn’t really think about it until I read your post, but I haven’t seen one of those plastic pizza thingies in years, and I see a lot of pizzas, as we frequently have pizza parties at work. Maybe it’s a regional thing? I live on the East Coast.

Also, far be it from me to argue with anyone over fudge sauce, but you could try making your own. I just melt good semi-sweet chocolate (Ghirardelli) with heavy cream in the microwave. I think there’s a recipe in The Joy of Cooking. It’s surprisingly easy to make.

See Jenn? I have to exploit my kitties; otherwise, people like you would never leave comments on my blog!

…hrm… were you saying something Beth?