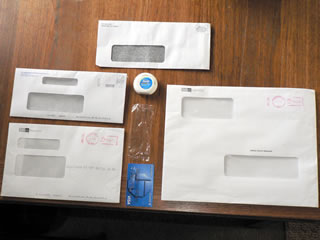 I failed to notice last week that another 6 months had gone by since the inception of Fake Plastic Fish. We’re just swimming right along here with no end in sight. Small victories are what we are after. Step by step, day by day, people waking up to their impact on the planet and what they can do about it. If we look too far ahead, we put ourselves in danger of either becoming overwhelmed by the immensity of the problem or lulled into complacency by promises that the earth will sort itself out one way or another. And yes, that’s true. The earth will be fine, no matter what we do. But life as we know it… that’s another story. And that’s what we work to protect moment by moment in the here and now.

Plastic used up this week that was purchased before the plastic project began:

So, that’s it for last week. And now I’m hungry. Off to bake a potato. Mmmmmmm!

Hi AnnMarie. You are right! I guess the customer service rep I spoke to on the phone did not understand this. He told me that the statements were gone and the only way I could see them again would be to have hard copies mailed to me. *Sigh* Well, this is good to know.

Look at your chase account again–I just had mine closed for fraud and by the time I got the new card, everything from the old card was connected to the new one. During the few days in between, the account listed nothing online, but as soon as I had the card in hand, I could login and it was just like nothing at all had happened.

Hi Cindy. I believe you are correct. The plastic window is a contaminant in the paper recycling stream, but it’s allowed because it’s such a small percentage of the material collected. The plastic itself is not recyclable. Same applies to staples.

Rob — just make sure you’re only sending Recycline #5 prescription bottles. In my house, I’ve got Rx bottles that are #5, #2, and #1. And as far as I know, the caps are still not recyclable unless you send them to Aveda.

Thats good news about Safeco- They have been my insurance company for about 10 years. And get this- recycline now takes your prescription bottles in their take “5” program 5 being the number of plastic- Ya hear me- Medicen bottles! Check it out~

Hey Beth, do you know why envelops with plastic windows are accepted in virtually all recycling stations as paper? Is it because the plastic amount is small enough to mix in the paper pulping process?

I love the Eco-Dent floss. So nice to find some not packaged in loads o plastic. Been using it about a year now.

Jen is right about the prescription bottles. My problem with mail order is that I get mine through Kaiser, and they ship them in a big plastic pouch. So it doesn’t really save. I just go pick them up at pharmacy. And no, they won’t take the bottles back to refill… again, due to state law.

I don’t think there is any way around this due to federal/state regs – however, if you utilize the mail order Rx plan that most insurance offers, you would use less because they usually just put 3 mos in 1 bottle – or sometimes they don’t even have to dispense it into another bottle and just slap a label onto the mfg’s bottle.

Thanks for the info on dental floss. I had not yet figured out a plastic free (or almost plastic free) way to floss. I hate to floss and have been using Flossers. I knew that was too much plastic. What I need now is ideas on greener prescription bottles. Any ideas?