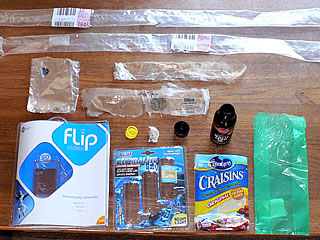 Well, we can’t say I didn’t end the year with a bang. Look at all that plastic, most of which was acquired new. And some of which is exactly the kind of packaging I routinely rail against. But I have excuses explanations for all of it, I assure you!

First, plastic used up this week that was purchased before the plastic project began:

Okay. This year is almost finished. If I have a chance this weekend, I’ll photograph and post one shot of my 2008 new plastic waste. It all fits into one big cat litter bag. I was hoping to keep it under 5 pounds for the year, but those wacky clamshells this week put me over the top. Here’s hoping 2009 is even lighter!

Hi Maya. It would be exciting if Whole Foods’s cans were not lined with BPA. Please let me know what you find. I would not necessarily accept the statement of an employee but would get a definitive answer from above.

Here is Whole Foods’s statement on BPA. Note that it doesn’t mention cans:

This blog, written almost a year ago, states that Whole Foods does use BPA in its cans:

Like I said, this could have changed. But I would think that if they had removed it from their cans, they would have posted that info in the BPA section of their web site.

I asked at Whole Foods and one of their employees told me their cans don’t have BPA liners…I wonder if they were wrong? I guess I’ll write corporate and get clarification.

My sons got some horrible plastic presents (soft bath toys–filled with phthalates) from some very dear relatives. I just said thanks and got rid of them later.

Skoy sent me my sample cloths in an envelope with a plastic mailer, so when I ordered my round for Christmas, I specifically asked them to use no plastic in the mailing. They wrote my address by hand (a huge chore, I’m sure), and they mailed it in a paper mailer with no tape. I wonder why they handled yours differently…

Thanks for the link to the article. I buy as much in glass as I can because it’s so easily recyclable, but I didn’t know about the BPA in cans. I’m still learning and determined to do better for Mother Earth. And my health!

Christy B, you rock! I guess the third company is Henry & Lisa`s Natural Seafood. Check out this article:

Everyone, check out this notice on Vital Choice’s web site:

So that’s helpful to people who eat canned fish and canned beans. There are so many other foods in cans… including that of the company for which I did the video. It’s not one of those three.

Exciting news, I got an e-mail last night from Vital Choice stating that they are 1 of 3 companies who have chosen BPA free cans. Unfortunately, they didn’t share who the other 2 companies are – I am assuming Edun is one but the other company remains a mystery, so far!

Arya is sitting so pretty next to that Video Camera Clamshell- Posing waiting for her closeup Ms. Demille!

You buy soy sauce in a can? Weird.

Oh, how I hate clamshells. We only had one this Christmas though (a beard trimmer for Mr Chiots). All other gifts were not wrapped in plastic and had minimal or paper packaging – YEAH!

Guessing games. I think I know who you are too, Anonymous #2. But my refrigerator is now clean. Or clean enough. Wouldn’t you rather scrub out the disposal? Or take apart the dishwasher?

For your belated Christmas present, I will clean your refrigerator. If you can guess who I am and want to take me up on this fabulous offer, all you have to do is call or email. A hint: I am not the person who opened your refrigerator door last June.

Unfortunately, this article’s author recommends other plastic alternatives. The shelf stable packaging (aseptic packs) don’t contain BPA. But they are nearly impossible to recycle and are lined with plastic. My choice is to opt for glass jars and to buy as much fresh food as possible without any packaging.

Well, Anonymous, if by “Friend” you mean “Dear Old Dad,” I actually don’t recall your ever opening my refrigerator. I do remember your opening up my freezer repeatedly. Perhaps you were having hallucinations brought on by the combination of massive sugar rush and ice cream headache.

All food cans are lined with BPA? Is this common knowledge and I’ve been under a rock? Is the shelf stable packaging (like Rice Dream milk) better? I’m trying so hard to green my life and attacking new things as I master each challenge, but BPA is in all food cans? Sigh! Sometimes this is overwhelming!

“1 plastic bag of Ocean Spray craisins. Found in the back of the refrigerator while cleaning”

I believe it! I felt like I was about to be attacked during the few times I opened your refrigerator door last June. LOL!

I too have plastic that was given to me by well-meaning friends as Christmas gifts. I am this close to asking everyone I know to quit giving me presents, period and donate to worthy causes instead. It’s so hard to do that without hurting feelings though! Christmas really sucks!!