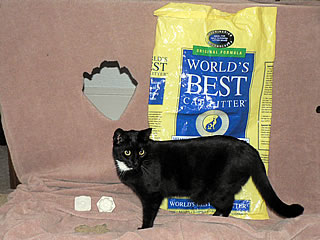 Why oh why do kitties eat plastic fleece? Last August I retired a holey red fleece blanket that the kitties had been chowing down on. Now, here’s the blanket we’ve used as a throw on our sofa for several years. I bought it long before I began avoiding new plastic. 100% polyester. Yummy!

After my Guilt & Gratitude post, Michael and I had a conversation about buying new things. He’s even more frugal than I am when it comes to avoiding new purchases, preferring to support thrift stores and often bringing home the rejected items that neighbors leave out “for free.” I told him about The Compact. I kind of feel like we already live a Compact-like life without joining or verbally committing to anything.

This week, I have another story to share about finding a way to avoid a new purchase. And this one doesn’t involve any guilt at all.

Feline Pine recently came out with a clumping version, which we really like. It’s still all natural pine sawdust, basically, but it’s loose and powdery and clumps up when it gets wet. No nasty perfumes (smells like sawdust), the cat likes it just fine, and one (lightweight, cardboard) box lasts us a very long time. If you’re looking for other options, give it a try!

Ever try Yesterday’s News? It’s made by Purina of recycled newspapers. As far as I can tell, the bag is all paper. My cat uses it, but he’ll pee on anything (and everything).

One of my cats does this, too! She’s eaten a shower curtain, a scarf, several fleece blankets, and a significant number of acrylic sweaters. She also ate the pocket out of my bathrobe. I don’t know why she does it. With the exception of the shower curtain, she only targets my stuff, and not my husband’s.

Hi Beth, great blog! Any chance you are in the HarriOak/Uptown/Adams Point/Lake Merritt area? I have put up a post highlighting your work on the HarriOak News.

Maybe with the cats it’s like me and cabbage, a non-food appeal – it has a nice texture and crunch. Dog’s gnaw on bones even if they are plastic. There is probably an appeal to the chewing.

Now if the cats can actually DIGEST the plastic, you may have the solution we have all been hoping for!

By the way, speaking of digestion, the 100+ worms in my new worm bin are munching away even as I write. I recommend a worm bin to your readers. They are great pets – quiet, not smelly, shy, don’t need to be walked and, best of all, their poop is actually better than what they eat to produce it. True, they are a little difficult to cuddle or pet but it can be done as long as you wash up afterward.

I checked out the Pet Express link and it they have a buy 3 get the fourth free deal which includes the litter you mentioned. Stock up on paper bagged litter!

You know sometimes kids eat weird tings like dirt and “they” say that it’s because that child has a deficiency of some sort that it is trying to satisfy? Ever heard that? Well anyway, probably if you put some plastic in their food they won’t need to go and pillage for themselves. just sayin

are your kitties rescued cats? I have one cat in particular who is obsessed with eating trash….more in the way of rubberbands and such. The vet said it’s like an addiction or a bad habit some cats have….hard to break.

World’s Best got really expensive – I got a couple bags of Feline Pine, but the bags are plastic. It works pretty well but it gets EVERYWHERE and my stupid Electrolux just shorted out on me. :(

I’ll have a look at this litter – want to hear how you like it.