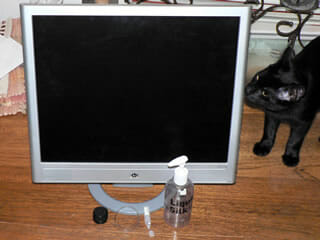 I like to think of myself as pretty Zen, mellow, going with the flow. Eh hmm… my ego likes to think that about me. So I write posts about loving what is and being mindful of little things like cheese wrappers and taking time out for silence. But sometimes, a gal just wants to vent. And this is one of those times. HP sucks, ya’ll! HP can bite my ass!

Items used this week but purchased before the plastic project began:

And now on to this week’s new plastic waste:

3 years ago, I bought a Lenovo Thinkpad R500 for nearly 850$. Thinkpads are supposed to last forever, there are some IBM Thinkpads that still rock til date, but this one’s a Lenovo. So, within the first year the screen developed dead pixels all over and they replaced it in warranty. Within 1.5 years the motherboard died. The cost of a new motherboard was quoted at $400 not including labor. If I sold it, I’d get $50. Instead I decided to sell some parts on eBay individually and made more money selling half the parts than $50. Lenovo really makes… Read more »

Lots of folks seem to have successfully used his suggestions.

As a tech, I guarantee the problem with the board (as is the problem with 95% of fried monitors) is that in trying to make them more light and more compact for consumers, the manufacturer stupidly put the capacitors for the back light right next to the heat sink. (Not sure how tech-oriented you are, as I just stumbled upon this post, but in other words, they put a heat-sensitive piece of the circuit board right next to the part of the monitor that sucks up all the heat. Yep, dumb, I know.) The capacitors themselves? Easy to find for… Read more »

Hi Beth, I’m 20, I’m a biology student and I’m from Argentina. I wish you all the best in your new eco-friendly lifestyle; I wish I could follow your example but most of the recycled products you buy are not available here. Your example and your ideas have made a difference in my life anyway, and even though I’m always very worried about the environment it has made me think a lot more about the plastic problem.So I just wanted to recommend you to be careful when you buy things from “bulk bags” (I think that’s how you call them…)… Read more »

My Epson scanner (6 years old) has just started playing up and I will be attempting to take it in for repair on Thursday… Wish me luck!

I’ve got an HP computer as well (but not a monitor). I’ve found it to be lots of headaches, not the least of which is a bad bearing in the power supply fan which makes a nasty GRNNNRRRR noise on a regular basis. HP support continues to insist it’s a software problem. I had an HP printer that, once out of warranty, began breaking critical parts at an alarming rate until it was completely defunct. So they lose ALL of my future business and I go out of my way to dis-recommend them to family and friends. On a side… Read more »

Well…at least the cat is cute.

Sometimes that’s all you got…

My computer nerd partner responded to your plight, which I read aloud, by saying that you and/or your technician would probably find the needed part on eBay or Craig’s List. Millions of people, including computer nerds, are pissed off at having to buy entire new pieces of equipment when only a replacement part is needed. Therefor, if you can name the part, you can buy it cheaply, from someone who takes apart broken things to make them repairable. Failing that, strip it and sell the working parts of your monitor! What comes around, goes around…

CONFESSIONS OF AN OLD GEEZER WHO ONCE TOOK TV TUBES TO RADIO SHACK TO TEST. Repair is a financially losing proposition for most companies. Years ago, Sony was supreme in high tech maintenance for professional (broadcast) electronics. Their repair manuals were jewels containing two color images of all circuit boards, detailed explanations of how every circuit worked, location diagrams for all components, state diagrams showing mechanical and electronic modes. It made it a joy to have a Sony product break for those of us who had the pleasure to repair them and we all enjoyed the multi-day tech schools that… Read more »

I got fed up with buying a new HP computer/monitor every 9-12 months from Costco so I switched to Mac – it was either that or throw them out the window to find some relief from my overwhelming frustration! I bought my current Mac just under 5 years ago. Had a few repairs/upgrades. I am considering a laptop though…so far the guilt has prevented the purchase. My current printer HP G85 I purchased refurbished 7+ years ago and the thing keeps going strong. I need a new one though – I need a CD image burner and this unit is… Read more »

Speaking of repairing stuff, my hairdrier broke!!! I’ve used it about 20 times in the past 3 years (to avoid going out in the cold with wet hair, and once for a wedding) and I was using it the other day and it started making this horrible sound! I remembered your post about this very thing and I’ve decided to try to fix it. So far, I can’t get the thing open, but I’ll keep trying. Thanks for the inpsiration. Also, I have a Dell laptop and it’s been good to me for the past 4 years. No problems what… Read more »

Great post Beth. Planned obsolescence is killing us! We are so used to living in a throwaway society so I hope that voices like yours (and the other folks who read your blog) get heard so we can begin to change things! Let us know what sort of response you get to your letter.

Yes, Beth. This is a big issue. We really need a system that encourages electronics to be long-lasting, fixable, and then finally taken back to be recycled. I went to a conference where Colin, NIM, spoke with others on sustainability and this was an issue that came up as one of the most important in the sustainability movement. The problem seems to lie in the inherent qualities of capitalism. But we can’t take capitalism as the problem and answer. We need a real solution. On another note, my boss has been struggling with HP fax machine/printers in her office and… Read more »

Hopefully you will have better luck with your Dell monitor. My husband and I have purchased two Dell computers in the past year (one laptop, one desktop) and have loved them so far. We haven’t had any trouble at all.

Your letter to HP is awesome! I recently had to replace my lap top because it wasn’t fixable. I decided to go with a desk top in hopes that it would be more repairable. The trade off is that it uses more electricity. Sigh.

I’ve also had to buy 3 printers over the last five years. I’m going to see about taking things to a print shop to print rather than buying a new printer when the next one goes.

Great post, Beth. I’ve been working the HP on their “takeback” program in an attempt to return my useless power cord to them. However, my interaction has actually been a pretty pleasant one. The rep I talked to was knowledgeable and pleasant and he sent me a personal email with instructions on how to send stuff back. On a totally unrelated note, I tried to send you an email but it got kicked back. Feel free to delete all this, as it has nothing to do with your plastic tally! :-) hey Beth, Yeah, I’ve been “rioting” for almost half… Read more »