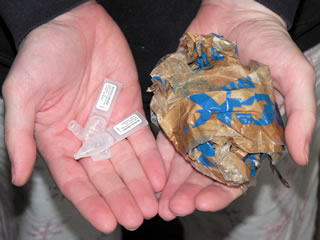 Oh joy! I’ve been waiting for the week when my plastic waste would finally fit easily in my own two hands, and this was that week. Don’t get me wrong. We still have plastic in this house that we’re using up, and the tally will go up again. But it’s nice to savor small victories.

Items used this week but purchased before the plastic project began:

Now, here’s my plastic-free kitty project for the week. I needed a way to keep the kittens from getting to the tangled mass of electrical cords behind our TV/stereo stand. I wish I had a before picture to show you. It was a real mess back there and the kitties loved it.

Lots of people were recommending I get one of those plastic cord covers, but a plastic cord cover is made from, you know, plastic. I tried making a jalapeno pepper spray and coating the cords with it to keep them from chewing, but it didn’t really work. The only good solution would be a physical barrier. The problem was that the TV stand was open on all 4 sides, and the cats would basically dive through. Here’s what the front looks like now. 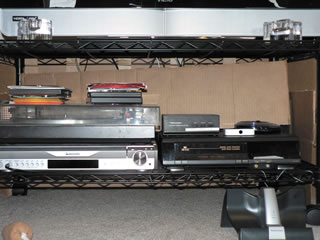 I know the cardboard doesn’t look so great, but really only the cats can see it. I had to lie on the floor to take the picture. From an adult human vantage-point, it’s not very noticeable. So anyway, the cats can’t get through to the back very easily. But they still could climb over if there were enough enticement, like lots of loose tangled cords. So this is what I did in the back: 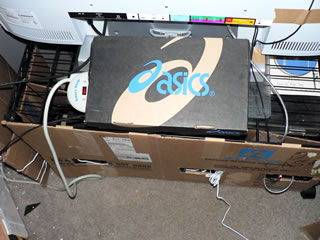 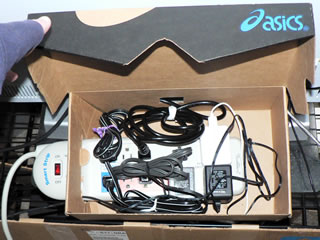 The shoe box was Michael’s idea. There are holes in the bottom through which the cords come up from under the stand. The Smart Strip Power Strip, which I wrote about in a previous post, wouldn’t completely fit in the box. But that’s okay because having it stick out makes accessing the switch easier. The cardboard is attached using brown paper tape, which we already had. Any other cords that were loose or dangly I tried to find a way to tape down… tape to the wall, to back of the TV, to whatever. There’s still one loose cord leading to a speaker, but it’s in the back and so far they haven’t noticed it.

This might not be the most beautiful solution in the world, but it required no new materials to construct and so far is working just fine. I haven’t caught either of them back there since I set it up on Monday, which is the point.

I can’t believe you tree huggers actually exist! I was gobsmacked at your stupid attempts to save plastic! Haw haw!

I am going to be checking this blog every week, and for each time you save plastic, I’m going to go down the supermarket and take 10 extra plastic bags and dump them in the bin!

Beth and Michael, Great job on keeping the kitties away from the plastic cords! I’m not sure what fragrances cats do not like, but something that makes them turn their noses away (sniffing and meowing pe-yew) might help, too. Maybe rosemary or garlic? If you need rosemary, I have lots!

That is a great idea! We have built a similiar structure, but wehn metioning to my sister-in-law who is a vet tech she made an observation, that I wanted to share with all your readers! While cats are curious, and they do like to be mischievious and sometimes chew, they usually will not continually go after cords unless there is sodium missing from their diet – I know sounds strange, but apperantly most cords are covered by a plastic coating that contains sodium, we combatted the chewing by adding a sprinkle of an additive from our vet to the cat’s… Read more »

wow! just want to say ‘great job’ on ending the week with that tiny amount of plastic. will try to be very conservative in my plastic use this week.

What a great feeling that must be! Congrats on getting your plastic down to such an insanely low level!

Packing tape is a pain, isn’t it? It’s one of those few rare things I haven’t been able to find an alternate use for no matter how hard I try..

Great job Beth! You two are on a roll this week! :)

Good work you two. It’s always very satisfying to see a problem and come up with a solution using things immediately at hand. who cares how it looks? Cats are smart, though, and they are likely making plans even as we speak. I’ll bet they had a private laugh over the Jalapeno stuff (cats don’t like to openly laugh)

Congrats on such little plastic. I check in with you each week and strive to follow suit.

Well done on the plastic!

The firefighter in me feels compelled to suggest that you put several air holes in your charger box.

Don’t want heat build up to ignite that cardboard.