So, at the end of my gloomy post yesterday (yes, I was a little depressed) I said I’d write about some things we’ve done here at Chez Terry/Stoler to save energy. Most of it is either stuff you’ve probably heard a million times (use CFLs instead of incandescent bulbs, use a programmable thermostat, use cold water to wash clothes, open the drapes during the day and close them at night, turn off lights when leaving a room, turn off the computer at night and while out of the house.) Other measures are things I’ve already written about here: not owning a car and buying carbon offsets for the few times we travel by plane or Flexcar, buying very few new things in general and opting for products with the least packaging, buying as locally as possible to avoid transportation energy costs. Other things, like buying energy-saving appliances or renovating our house are not options for us because we rent. 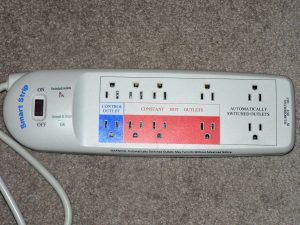 Another energy-saving measure that I really like is an item that’s, ironically, made of plastic. Its the Smart Strip power strip from Bits Ltd.

The strip works for combinations of electronics that work together, like a computer system, or an entertainment system. You choose one electronic component as the Control and plug it into the blue Control outlet. Then, you plug other components that are useless if the control is off into the white Automatically Switched outlets. And finally, electronics that always need to be ready are plugged into the red Constant Hot outlets.

Here’s how I’ve done it in my living room. My combo receiver/DVD/CD player is the Control because without it on, I have no sound for the system, so nothing else needs to be on if that one is off. Then, my TV, VCR, turntable, and iPod dock are plugged into the Auto-Switch outlets. When I turn off the power button on the remote of my receiver/DVD/CD player, the power is cut to that and all the other components in the Auto-Switch outlets. And when I say cut, I mean like unplugging them all from the wall. When I press the power button on, the receiver/DVD/CD player turns on and power flows to the other components making them available to be used, but not actually turning them on.

Yes, we do have a lot of electronic equipment, I’m realizing as I write this list. And yes, it’s aaaaallllll plastic. But it’s plastic we bought before we became aware of plastic, and now that we have the Smart Strip, it’s plastic that’s rarely on. I pretty much watch movies and play the stereo on weekends, being way too busy during the rest of the week learning about plastic!

Anyway, after plugging in those components, I plug my lamp, my cable amplifier (because the cable is split and also comes into my computer), and my headphone charger into the Constant Hot outlets because I want them to be able to operate even if the rest of the system is off. The Smart Strip is easier than a regular power strip because you don’t have to remember to flip the switch. When you turn off the control device, everything else that needs to be off turns off too.

Okay, so about the plastic. Yes, the Smart Strip is made from it. But one thing you can do to somewhat lessen the impact is to buy refurbished Smart Strips. Bits Ltd does repair and recycle any that they receive back. I had to wait a few weeks for mine because they didn’t have any in stock when I first called. The refurbished units cost less, but they seem to work just as well as new ones. I have been using mine for a couple of months now with no problems.

When ordering, I included a note to the company to please ship with no plastic or Styrofoam, and the strips arrived without any packaging at all except for the cardboard boxes they came in. I don’t know if there would have been packaging if I hadn’t asked.

So that’s my tip for this week that will culminate in the National Day of Climate Action on Saturday. And now I need your help.

What company makes CFLs that are not packaged in plastic? I know we can’t avoid the plastic in the body of the CFL itself. But I’d like not to have to deal with a crazy plastic nearly impossible to open blister pack again. Suggestions?

Hi, I really like your blog and all the tips you give about living without plastic. I’m actually looking for a way to get rid of plastic power strips. Do you know of any non-plastic power strips? Or that are at least VoC or PVC-free?

Hello! I’m from SmartHomeUSA .. we also sell them and I am the person responsible for testing any returned SmartStrips. I have two things to add to your post .. 1) They very rarely good bad! Most of the time the user doesn’t understand how to adjust the sensitivity properly. 2) The SmartStrip ships with no extra plastic, except for a small plastic piece that covers the sharp plugs of the power cord… it is in that cardboard box you mentioned, with one cardboard strip inside. Very minimal.

Halloween Candy, I always liked Smarties, they come in Cardboard boxes (even tubes (though with a plastic lid with a handy letter fashioned into it)). But I am sure the blue ones have been associated with some mind bending drug, or is that just the blue candy telling me to say this!!

I had a similar device in Germany in 2000, i bought it at Tchibo (that wacky shop that only stocked an item for 2 weeks, created some impulse buying panics). It a little plastic screw that adjusted its sensitivity for the master load as all TV / VCR standby loads were different, tweak this a little for the TV in standby and hey presto, all other items were turned when the TV went to standby.

Gave this away to a friend in Baku, my last 230v country, been looking for something similar since.

I came upon your post via Grist, and I wanted to be sure to abide by your admonishment to comment before moving along.

So, thanks for your post! I’m presently weighing whether to add smart power strips to our Earth Aid Kits, and I found your discussion on the topic – especially from the plastic perspective – very helpful. I’d be grateful for any thoughts you might have on our concept and efforts. Our consumer site is http://www.earthaidkit.com and our company site is http://www.earthaidenterprises.com .

Hi DuGlass. I’m not sure about your TV. I don’t use any settings like that on my TV. At all.

For a lot of people, everything to do with channels (time, date, skipped channels) is either done through the cable box or the VCR or the TIVO or whatever piece of equipment is used to record programs. The TV is just a passive receiver. Are these things built into your TV set?

For myself, I don’t record shows very often, but when I do, I record them on my computer. I use the computer like I would use a TIVO or VCR. It’s got Windows Media Center built in.

I can understand needing to leave one piece of equipment on… whichever component it is that keeps track of channels and is programmed to record. But there are so many other things that can be turned off when not in use.

OK, I’ve gone over the description of the smart strip twice — I still don’t see how it’s a timesaver for many common setups.

Let’s say we’re using the strip you described your receiver/dvd/cd is plugged into. You turn off the receiver; the tv is turned off, too. When you turn it back on your tv has lost any settings most people use at least SOME of the time: time; date,;blocked channels; skip selected channels; etc. Most people would like that stuff enough to avoid this power strip as a result.

If you plug the tv into an always-hot plug to avoid this you’re missing out on the power savings you wanted in the first place.

Am I missing something? Thanks!

Beth, I saw the Smart Strips product mentioned in the November/December issue of GOOD Magazine, which if you haven’t checked it out, is a great read..

Since today is Hallowe’en, I am suddenly aware of all the plastic packaging on the crap candy that my duaghter insists we have to hand out so the house won’t be TP’ed. (I’m still working on that one, and would love to hand out apples or homemade cookies instead.)

It’s too late for this year, but next year I’d welcome suggestions for Hallowe’en treats that aren’t wrapped in plastic AND won’t go straight into the garbage when parents check their kid’s treat bags.

And I’ll have to see if we have Smart Strips in Canada!

I purchased the basic 60 watt CFLs at Whole Foods in cardboard packing. I think they also had 75 watt.

SMART! It sounds like a key to this product working is also having smart users, like yourself, who can strategize their power needs. I did something similar with a plain old dumb strip to my TV. My first draft had all TV-related power plugged into a power strip that I turned off when done with the TV. The downside was that it made my cable box operate all screwy, so I conceded and gave the box a separate plug so it could continue to do whatever it is that cable boxes do when they’re turned off.

This is far, far better than my old wasteful ways, but not nearly as cool as your new toy!