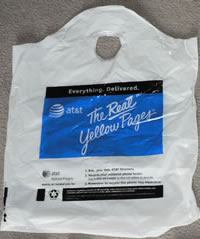 Back in September, I wrote about the plastic AT&T Yellow Pages bag that showed up on my doorstep unsolicited. Here’s the update. I called the Yellow Pages, found out to whom I should write, and sent this letter (PDF file).

Not long afterwards, I actually received a telephone call from Jim Troup, the head of environmental issues for AT&T Yellow Pages. We had a long conversation about plastic bags, Yellow Pages recycling, and different types of degradable bags the company has tried. He told me he is researching alternatives to the plastic bags, and that they actually did an experiment up in Redding, California, with a bag made of a plastic called D2W. He called this plastic “chemo-degradable” rather than “bio-degradable” and said that AT&T was still looking for something fully biodegradable and would let me know when they’d made a decision.

Weeks went by, and I forgot about D2W plastic, until … Read the rest 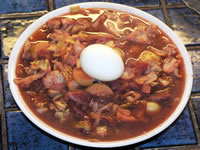 I thought I’d start a new weekly recipe post here. I’m realizing that each week when I post my plastic tally, you get to see what foods I consumed that were packaged in plastic, but you don’t get to see all the delicious things I got to have that weren’t. So these posts will focus on the positive aspects of living without plastic and demonstrate that, aside from missing cheese and Haig’s spicy hummus, I’m not really living in deprivation here.

Disclaimer: I’m not a gourmet cook. I’m learning new techniques, but I wasn’t raised on homemade bread or home-canned preserves. I can follow basic recipes and sometimes will simplify them for my own skill level and sanity. In other words, don’t expect Martha Stewart or Crunchy Chicken. Just one person trying to eat basically well while avoiding as much plastic as possible. Here goes.

Last Saturday, I cooked up a big pot of Vegetarian Split Pea … Read the rest 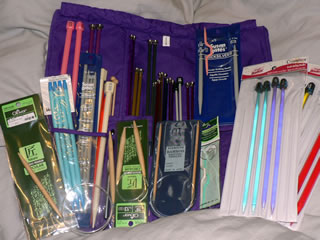 Knitting is a nice, eco-friendly hobby, right? Well, maybe. But it depends on the tools we choose and the materials we use. (Hey, that rhymes.) For a long time, I’ve been opting for natural fibers over acrylic and other synthetic yarns. But it wasn’t until I decided to knit a hat for one of my co-workers this past December that I really examined the contents of my knitting needle roll and realized just how much plastic I had thoughtlessly purchased while building my stash. And I’m not just talking about the needles themselves, although quite a few of them are made of plastic. Even the wooden needles are sold in plastic packaging.

I created this hat using wooden circular needles, which of course have a plastic cord that connects them. (Have you guessed I’m just looking for an excuse to show off the felted hat I made? Check it out before and after felting.)

Fortunately, I already had the circular needles in my stash and didn’t… Read the rest 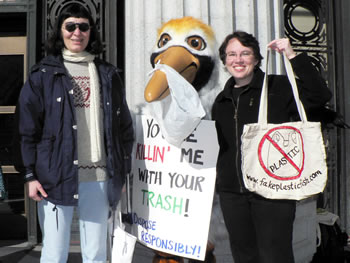 Here are my friend Nancy, a poor seagull, and I at the Oakland plastic bag ban press conference on the steps of City Hall this morning. (I’ve got to do something about my hair soon! I’m starting to look like one of the Partridge Family boys.) It was a beautiful, sunny day: a reprieve from all the rain we’ve been having.

I thought ABC 7’s coverage of the press conference was disappointing.  They really seem to focus on the plastics industry’s arguments against the ban rather than on promoters’ arguments for it. And reusable bags barely get mentioned at all. Oh well.

On the bright side, businesses such as Whole Foods and City Car Share had representatives who spoke in favor of the ban today. Whole Foods, as you’ve probably already heard, is set to eliminate plastic bags in all of its stores by Earth Day this year.

And City Car Share has begun including reusable bags in all of its cars as a service to members. What… Read the rest 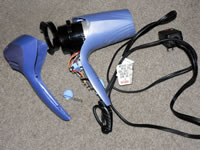 On January 2, I reported about my broken plastic hairdryer and how I was hoping to fix it during my visit to my electronics technician (not “electrician,” there’s a difference I’m told) dad in Hawaii. Well, I’m happy to report that it’s fixed. He was able to figure out what part was bad and knew just where to go to get a replacement. Then, he also knew how to attach the replacement part once we found it. He’s my hero.

After using a screwdriver to take it apart (which I’d already done in the end of December), you need an ohmmeter or multimeter to test the circuitry. As I was attempting to write this post last night, I realized I didn’t know how to explain how my dad used his multimeter to test the wires. So I asked him to send me an explanation, and this is what he wrote:

Two leads (a ‘hot’ and a ‘common’) attach to the plug, the common… Read the rest

I jotted these words in my notebook on the plane yesterday flying home from O‘ahu as Diamond Head receded in the distance, clouds and water took over the view, and a lump started to form in my throat.

My mom and dad lived in Waikiki in the early 60’s, my dad working for the phone company after completing his stint in the navy and my mom having taken a teaching job on the island. Both were recovering from failed first marriages. They met, married, and conceived me. Nine months later, I was born in Maryland, the place to which they moved to raise a family in closer proximity to their parents.

Somehow, although I never actually saw the islands with my own eyes until I was nearly 30 years old, Hawai‘i is inside of me. Maybe it was the Hawai‘ian music my parents played in our house while we were growing up or the photos of my mom performing a hula in her beautiful mu‘umu‘u or their friends from the island who would visit us on the mainland… Read the rest 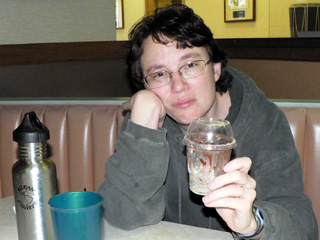 Yep, even I ended up using plastic in paradise. I tried so hard all day to avoid it. My folks are fast food people, and on a road trip, McDonald’s is the “restaurant” of choice. I filled up my Klean Kanteen with water all day. I avoided plastic straws and cups and wrappers at every stop. Finally towards the end of a day of beautiful views and picking up garbage, I caved in and ordered a sundae at McDonald’s. I thought I was safe. After all, I had my reusable travel utensils, so I wouldn’t need a plastic spoon.

Duh! McDonald’s sundaes come in a plastic cup with a plastic lid. And it’s not like this is a new phenomenom. They’ve been sold this way from the very beginning, late 70’s? Early 80’s? Certainly since I had my very first… Read the rest

Living in a material world 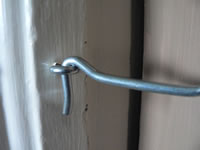 The holiday season has been over for several weeks now. And for several weeks, I’ve been contemplating the complaint we seem to hear every year from social critics bemoaning the rampant materialism of our culture. People, they say, care more about buying new things than they do about caring for each other and the planet. These critics decry the commercialism of Christmas. And while I agree that our society has become dangerously acquisitive, I’m wondering if the solution isn’t for people to become more materialistic rather than less.

If we really were materialistic, wouldn’t we care more for the materials of the world than we do? Wouldn’t we spend more time enjoying the material things that we already have rather than mindlessly consuming more? Wouldn’t we place a higher value on each item with which we come into contact, considering where it’s been and where it will end up when we’re finished… Read the rest

Naughty kitties pass the test, as does our drinking water! 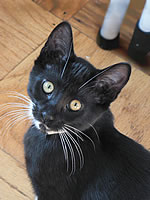 I was surprised how easily the kitties went into the box two weeks ago. The blue plastic box that I got from a very nice person on Freecycle. They were so quiet in there, I had to check a couple of times to make sure I hadn’t imagined putting them in. Good thing they get along with each other. We will need to get another cat carrier for when they are bigger and can’t both be stuffed into the same box. Freecycle or Craigslist. No new plastic for these cats!

So we went to the vet and got shots and blood drawn. Well, they did. I just felt their pain from a distance. And today we got the results. No toxoplasma gondii for these babies. Their poop is certified flushable, as is their litter! And pregnant women are safe in my house. Hurray! We’re still using the Swheatscoop litter, although I’m not crazy about the smell. I do sprinkle baking soda into it to absorb odors. I’ve heard that pine litter is good. But I really do want something that’s… Read the rest

Questions and requests for Brita users in U.K. and Central Europe 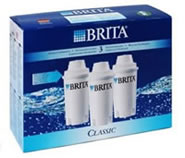 Request for European Brita users to send samples of their Brita cartridges for the Take Back the Filter campaign. http://takebackthefilter.org.