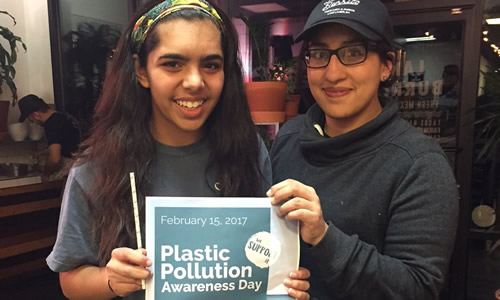 Hannah Testa, a 14-year-old student in the state of Georgia, has joined the ranks of other influential kids raising awareness of the plastic pollution problem.  In fact, she’s managed to get the State of Georgia to declare February 15, 2017, Plastic Pollution Awareness Day.  Here’s her story, in her own words.

People always ask me how I ended up getting February 15, 2017, declared as Plastic Pollution Awareness Day in the state of Georgia. After all, this is a major eco-event and I am just a 14-year-old teen. So here is my story.

When I was 4 I realized that the actions we take today can have an impact on our world.  One day, after leaving a store, I said to my parents, “No one cares about our planet except for us”.  I told my parents that no one brought their own reusable bags except for us. From a young age, I knew that protecting the Earth started with us. Around the age of 10, my parents started exposing me to issues that … Read the rest

How to Buy “New Shoes” without Buying New Shoes

Last year, I was trying really hard to buy nothing new, and while I fell short several times (more on that in a future post), I did pretty well in the shoe department.  Nearly all shoes have at least some plastic components.  Buying them secondhand or repairing the shoes you already have are great ways to get “new shoes” without actually buying new shoes and new plastic.

I’m not one of those people who won’t buy secondhand shoes.  You can find some pretty great, almost new shoes at thrift stores for a fraction of the cost of new shoes.  In June, my local Goodwill had a 50% off shoe sale, so I bought four pairs of practically new shoes for about $20.  (They were actually in much better shape than in this photo that I took today after having worn them for several months.)

When buying secondhand shoes, make sure the soles are not scuffed (or only minimally scuffed) and insoles are in good shape.  If you’re… Read the rest