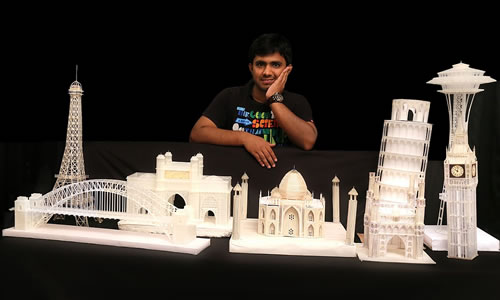 A few months ago, Sreenivasulu.M.R, a software professional in Bangalore, India,  emailed me out of the blue to let me know about his project building intricate miniatures of world-renowned architecture out of used plastic pen refills.  These days, a lot of my emails go unanswered and even unread because my time is consumed with caring for my dad.  But for some reason, this one intrigued me enough to click the links in it.  And wow, was I glad I did!  Sreenivasulu’s pieces are amazing.  And he’s using them to educate students about plastic reduction and recycling.… Read the rest 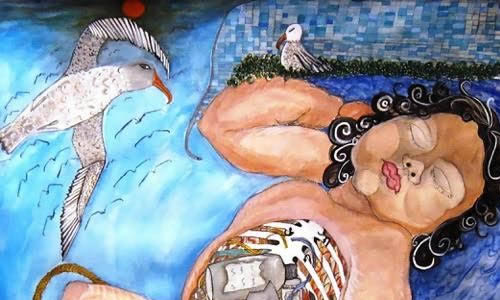 Three years ago, artist Dara Herman Zierlein emailed me out of the blue:

Dear My Plastic Free life, Thank you for all that you do and the amazing resources!  Below is a link to my watercolor paintings dealing with multiple themes around pollution and the consequences of using disposable one time use plastic items, like water bottles etc… I am an art activist, My name is Dara.  I’m excited to share them with you. Its a very hard to fight this battle alone and I spread the word through my art as I practice eliminating plastic use in my daily life.

The first two images were poignant and beautiful, but it was the third that stabbed my heart and took my breath away.

And then, sadly, the email got buried under a bazillion others.

Last night, finally getting my insane email inbox under control, I stumbled across Dara’s images again and had the same powerful reaction. So I have to share them here today. I asked Dara to send me her thoughts and … Read the rest

Do I Look Good in Plastic? 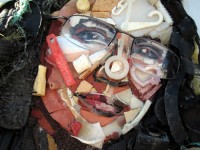 Artist Tess Felix creates amazing portraits out of plastic trash she collects near her home in Stinson Beach, CA.  She reached out to me in early 2012 when I was finishing up the manuscript of my book to see if she could do my portrait for the book’s jacket.  Sadly, it was too late for that.  But this summer, she did a series of portraits of ocean advocates–including me–and displayed them this weekend at the Bioneers Conference in Marin County, CA.  I think we all look amazing in plastic, if a bit trashy.

But before I show you our portraits, I have to show you what drew me to Tess’s work in the first place.  It’s edgy and bold and makes a statement.  A plastic mermaid, for example, with a toy gun.  Maybe she’s pissed off at what we are doing to our oceans.… Read the rest 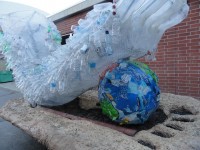 Last year was my first trip to Black Rock City and the annual Burning Man festival of art, fire, and radical creativity, as well as dust storms, cracked feet, and dry, bloody boogers.  I can’t wait to go back. This year, I’ll be part of the Earth Guardians’ Plastic Footprint project — combining art and education about plastic-free living.  Today, I’ll tell you about the art and associated workshops we have planned. Tomorrow, I’ll share all the new plastic-free solutions I’ve discovered for Burning Man this year. I’ve been researching my head off.  Really, my brain hurts right now.

SCROLL DOWN the page for the list of our Plastic-Free Workshops and events next week.  But first, the art…

Annie Clark, an artist and art teacher in Nevada’s Washoe County School District, contacted me this past spring after … Read the rest

Pam Longobardi calls her art “Interventions.”  She spends many hours gathering up plastic trash from the world’s beaches and bringing it into galleries where it can be positioned, examined, seen.  Her current expedition, Drifters Project Kefalonia:  The Giant Sea Cave Excavation, was inspired by a heartbreakingly poignant discovery she made last summer in Kefalonia, Greece.   The story and photos made me cry today, so I wanted to share them with you.  Here it is, in Pam’s own words.

In July 2011, working on my Drifters Project phase I: One World Ocean, I went to a remote beach by boat with a local fisherman.  He described this beach as having some of the most debris on the island.  It was spectacularly beautiful, but even from the crystalline water 100 yards offshore, I could see the telltale signs of plastic impact.

The amazing feature of this beach were the sea caves visible in the right hand side of the image.  … Read the rest

Show Your Plastic. Make a Quilt.

The International Plastic Quilt Project encourages people to live plastic-free and to make art from the plastic waste that they do end up with.

I met up with Oakland resident Amy Chovnick last month to be a part of the following video, explaining the idea behind the project and how you can get involved. It’s simple!

I got a chance to see part of the quilt a few weeks ago at the Mini Maker Faire in Oakland. What I loved about it was the variety of designs, from simple to complex. See for yourself. (Click images to see larger.)

And here are some fake plastic fish…

Today is World Oceans Day. It’s also, appropriately, No Plastic Day. The ocean is magnificent and yet fragile. In awe of the ocean’s vastness, we humans discard our waste, imagining that the sea will wash away the things we don’t want. We believe that oil, plastics, mercury, fertilizers, pesticides will all simply disappear. And yet, the living systems that depend on the ocean (including humans) are coming to learn that while the ocean may be vast, it is also finite. Can you imagine a world without oceans? Several artists want us to do just that.

The Plastic Century artists set up an installation at the SF Academy of Sciences last week asking visitors to think about the rise of plastics in the world’s oceans from 1910, the year Jacques Cousteau was born, to 2030, an imaginary time when plastic has completely filled up the ocean. Setting up 4 water coolers representing the years 1910, 1960, 2010, and 2030, they… Read the rest

Where Should Fake Plastic Fish Live? 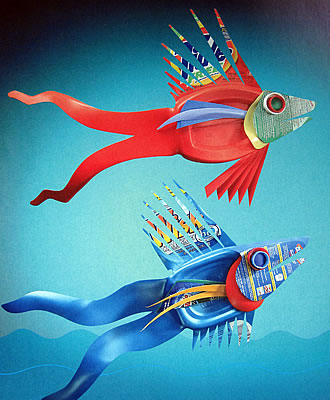 Curating the Beach: Just Another Story of Plastic Trash 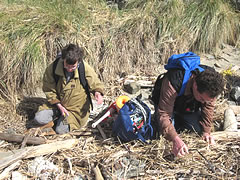 Last week I learned that you don’t have to travel to Kamilo Beach in Hawaii or Midway Island to find mounds of plastic trash. No, there’s plenty of it just up the California coast at Kehoe Beach, part of the Point Reyes National Seashore. And I got to see it.

From a distance, Kehoe looks pristine. In fact, there are some days when Richard and Judith are all alone on the beach. So you wouldn’t imagine there would be much trash, especially in Marin County where folks are a pretty green bunch.  But get closer, and you’re in for a disheartening surprise.

Because of ocean currents, Kehoe ends up a plastic waste dump every year. And Judith and Richard come there to mine the beach for art supplies and help educate people about plastic pollution. I was fortunate to hang out with them last Monday and collect some plastic trash myself.… Read the rest 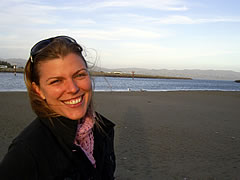 I’ve been meeting just the trashiest people in the last couple of weeks. Um… trashy in a good way.

I met Sara Bayles after the Blogger Beach Cleanup on October 24. You know, the one I missed. Sara’s blog, The Daily Ocean, tracks her goal of collecting trash on the beach in Santa Monica, CA for 365 days. She’s currently completed Day 72 and already collected 336.13 pounds of trash ALL BY HERSELF. And get this: she only collects trash for 20 minutes each day. That’s a lot to collect in a very short amount of time.

Sara is a ceramics teacher and told me that while always wanted to participate in an organized beach cleanup, she routinely found herself working and was never able to make it to one of them. So when she moved close to the beach this February, she took it upon herself to create her own beach cleanup program and invite others in the community to join her. So far, the community has collected an additional… Read the rest