Take back the Brita filter campaign?

In 2008, Fake Plastic Fish asked readers if they would be interested in a campaign to persuade Brita to recycle filters in the U.S. The campaign was created and succeeded. For more info, visit http://takebackthefilter.org. 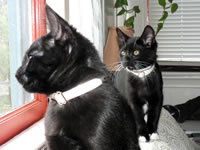 We’ve been finding all kinds of plastic-free toys for the kitties to play with, both store-bought and homemade, and have also discovered a really wonderful online small business selling natural pet supplies. So here goes… I discovered Purrfectplay.com at the San Francisco Green Festival in November. Purrfectplay.com is owned and run by Pam Wheelock, who describes herself as having “always been outside the main stream and a *greenie* long before it was a movement.” The company makes natural fiber toys for dogs and cats, such as catnip mice and wool balls, as well as other small pet accessories. All the products are made by homeworkers in Indiana and Detroit.

As the Purrfectplay web site says:

Purrfectplay is run simply. We are dedicated to producing wonderful pet products crafted exclusively from organic, chemical free, and fair-trade materials. We are members of Green America and the Organic Trade Association… Read the rest

Hand lotion. Is it for the bees? 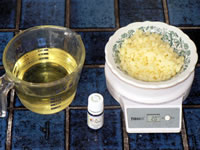 Have you ever wondered how honey is harvested from beehives? This fall, Michael and I got to find out firsthand while visiting our friends, Jerry and Mea, at Draper Farms in San Anselmo.

The hives are wooden frames with beeswax starter cells. The bees fill the cells with honey and, as each cell fills up, cap them with their own beeswax. When the hives are full of honey and ready to harvest, the beeswax caps are removed from both sides of the frame with an electric heated knife. This was the first part of our demonstration. The hives had already been gathered into the barn prior to our arrival and the bees sent on to create new hives.

Next the frames are placed into a centrifuge, where they will be spun to extract the honey. The honey flies out from the combs onto the sides of the centrifuge and then runs down the walls and out a spigot into a waiting bucket.

We all got to take home a jar of raw honey. Mmmmmm… but my question was what happens to all the leftover beeswax.… Read the rest 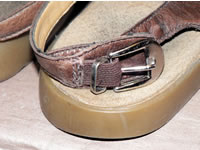 Back in August, when Fake Plastic Fish was less than two months old, and I’d only recently become aware of my plastic consumption, my sandal broke. In fact, the elastic strap had become so worn, I had a feeling it might break that very day as I left the house and packed an extra pair of flip flops just in case. Sure enough, it snapped as I was walking down the street. The old me would have automatically tossed them out and bought a new pair. But these were some of my most comfortable shoes, and I didn’t want to waste them, plastic or not, so I found a shoe repair shop down the street and had them fixed in fifteen minutes.

This might seem like a very simple, common sense thing to those of you who have been trying to live frugally, simply, and greenly for longer than I, but at the time, I felt so proud I wanted to call my friends and tell them the news: Guess what! We don’t have to throw stuff out! There are people who can fix it!

Since then, I’ve had a … Read the rest 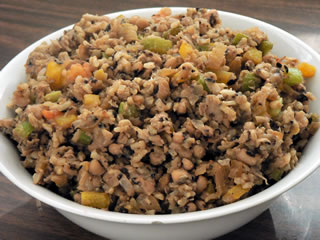 After our rockin’ kitty New Year’s Eve party last night (only kitty-lovers allowed), one of us (me) slept until 1:15pm this afternoon, then somehow managed to crawl out of bed and put together a pretty awesome pot of Hoppin’ John, the traditional New Year’s Day dish of black-eyed peas and rice. Except, not having a hamhock lying around anywhere, I used this recipe from The Vegan Chef: http://www.veganchef.com/hoppin.htm. So I guess this is a good start to our mostly vegetarian new year.

I think 2007 was probably one of the most eventful years of my life. I began it by running my first marathon on my birthday, January 7, and ended it by adding two new fantastic beings to our household. Along the way, I did some more running, had a hysterectomy, got enlightened about plastic, started this blog, made trips to learn all about where our recycling goes, and joined a wonderful environmental group, Green Sangha.

We can’t predict… Read the rest