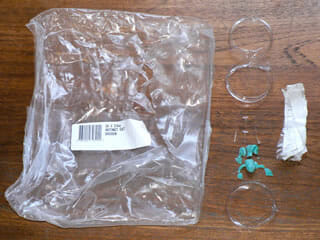 The last week was all about cats and fudge sauce. Kitty was hurt and mama was stressed. And mama still had half a case of fudge sauce calling out to calm her nerves. All she needed was a big spoon.

So, if you’ll recall, I did attempt to get rid of some of the fudge sauce by bribing the Californians to write to your reps about the AB2058 plastic bag legislation. Three CA readers heeded the call: Arudous, HomeSchoolMom, and Green Bean. But Arduous and Green Bean already received jars of fudge sauce. And a couple of people who don’t have the privilege of living in California, Small Change and Bobbi, wrote letters to their local officials anyway. So, I’d love to send jars of fudge sauce to HomeSchoolMom, Small Change, and Bobbi. If you all want this treat, please email me and let me know your mailing address.

With that, here’s the tally for the past two weeks. Plastic items used this week but purchased before the plastic project began:

That’s all the plastic for the last two weeks. There has been some generated by Arya’s traumas and vet visits, but it won’t be tallied until it’s used up.

I recently got some tumblers as a thank you from the WWF, and they shipped them in a cardboard box with one layer of cardboard between each pair. Contrast that with Amazon, sending a (far less fragile) CD in a box 10 times too big and filling the rest of the space with those plastic bladders…

Oh crap. I said I was GOING to do that, and then I forgot. I’m a little scattered these days. I am a bad bad person who does not deserve FPF’s fudge sauce. Okay, I better do that right now.