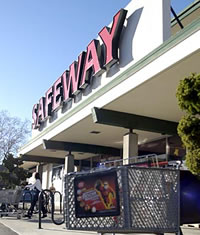 I am really fortunate to live in the San Francisco Bay Area with stores like Rainbow Grocery and Berkeley Bowl that sell so many foods in bulk bins without any packaging at all. It would be much harder to live plastic-free without these kinds of stores. So I thought I’d take an aisle-by-aisle tour of my local Safeway to see how I’d minimize my plastic consumption if I had no other place to shop. The exercise was enlightening.

I planned to write this post in the same way, as an aisle-by-aisle assessment of Safeway’s offerings and how to shop there while consuming the least plastic possible. But writing the post that way became so tedious tonight, I just had to stop. You don’t need me to tell you what products are on the shelves of Safeway. Anyone who shops there can see for themselves. But there are some important principals to keep in mind when shopping at any mainstream grocery store, so I’ll list those, as well as a few other things I discovered during my trip to Safeway.

So, that’s my Safeway report. We can all minimize the amount of plastic and other packaging we consume, no matter where we shop, if we make a few sensible choices each time we visit the grocery store. We all consume. It would be nice if we all consumed mindfully.

I think reduction of plastic is key, the amount of plastic bags that I see littering the town that I live in alone is just scary. I have made it one of my goals to not bring any more plastic bags home with me. I started by making my own grocery bags from recycled sheets, and drapes that I found at a local thrift store. I think that if I can make a bag from something that might end up in a landfill, then I have done twice the good!!! So check out my bags I sell them on ETSY under the name ThreadBeaur. It is one thing that is easy for us all to do on a daily basis!
I love your site!!!

I thought this (unpackaging at the checkout counter) would be an interesting approach even though I had not had the courage to practice it yet: https://www.theguardian.com/business/2006/nov/14/supermarkets.ethicalliving

You know, other than stuff about canned goods and other commercially pre-packaged items, I have the same issues at my local farmer’s market.

Most meat is in plastic. I was feeling quite superior about myself for preferring the meat in freezer paper until I realized that I can’t recycle or compost it, so it’s landfill-bound anyway (I still prefer it, since it is re-sealable unlike a plastic wrapper, I just don’t feel superior about it). At least there are almost no styrofoam trays, except for the vendor who does the fresh and smoked trout — and really, isn’t local smoked trout worth the environmental degradation of a polystyrene tray?

Most cheese is in plastic. Same note about “waxed” paper cheese wrappers and my false sense of moral superiority.

If you don’t specify, all vendors will give you a plastic bag to put your stuff in. A few pre-pack produce in paper sacks, which I always save and never remember to bring with me the next time. The big difference is that they will often thank you for not taking it. About the only time I’ll take the plastic bag now is if I’m getting a couple of pounds of discounted over-ripe tomatoes to make sauce with, since they don’t play well with others loose in my canvass tote.

The farmer who sells eggs uses a mix of styrofoam and cardboard — all reused! He also specifically asks all repeat customers to bring the cartons back so he can use them again. Frequently, there are two or more date stickers on the carton, with the older ones crossed out proving that the reuse stream is doing well.

The big advantage at the farmer’s market is the local aspect of it and I guess saving some petroleum-based fuel by purchasing from local farmers somewhat offsets the petroleum-based packaging. The other big advantage is that they all seem to use as little packaging as they deem necessary to keep their product in good shape. You’ll never see a polystyrene tray with plastic film wrap then encased in a plastic-coated cardboard sleeve with a pretty picture on it.

I am a very keen environmentalist like you, and I’ve only read a tiny fraction of your blog, but I have a minor comment. I actually think that letter from the guy at the supermarket had a valid point about use of paper instead of plastic. We do have to think of the environment as a complex system, and concentrating so much effort just at plastic risks preventing seeing the overall effects. I don’t know if he’s right, but certainly paper bags are not a perfect solution. If we keep the pressure on, the biodegradable bags will probably come down in price, but then we have to look at the energy used to make them too! Why can’t it be simple!

I can see your main point is to reuse bags, though, and on that I couldn’t agree more. Unfortunately I think it will require a level of effort on the part of the consumer that they’re just not willing to make yet.
Keep up the good enviromental lobbying!

At least in Sweden, in larger stores, or in market type sales halls, cheese is stored in a fridge behind glass without any packaging. The person behind the counter cuts the part you wnat and wraps it in paper.

SOmetimes thin plastic foil as well, but you can ask them not to use that.

Beth: Thanks for that aisle-by-aisle trip down plastic lane. That was a real eye-opener and will definitely change how I grocery shop in the future.

Hi Beth – I am so glad I found your website. You’ve got great solutions to problems I hadn’t even considered! This post was great. Thanks for your tips – I feel a little more optimistic about the possibility of eliminating plastic. Thank you.

Hi Beth,
This is the first time I have seen your blog & it is amazing!!!! I am a big follower of the no impact man & found you from your guest post on his blog today!!
I live in San Francisco and am a keen environmentalist, I work for Clean Water Action in the city and do my best to keep plastic out of my life. My biggest problem is the plastic roll bags that you put your bulk produce in – like the Safeway CEO said there doesn’t seem to be an option. How about a couple of reuseable clear bags that you could take to the store, you could clean them & reuse them.
There must be millions of those clear bags out there!!
I will be checking out your blogs on a regular basis from now on – great work
Peace and happiness, Nigel

I just put my produce in the cart, too! and I bring canvus bags, which everyone wants to line with plastic, first. If I forget them, and ask for paper, they want to put it in plastic first, too. *shrug?* Lots of times, if possible, I just request no bag at all. :)

I also avoid processed stuff. Helps the environment, my waistline, and of course — my overall health!

Hey, the San Francisco ban on plastic bags has gone into effect!

But this means the big supermarkets will probably send all their plastic bags to areas where they are still allowed, and suck all the paper bags out of there to send to SF.

So ALL cans leach bisphenol? (“Bisphenol … we will not let you go!” — Queen, “Bohemian Rhapsody”) Ugh. I liked getting things in cans because they last a long time, and you’re supposed to have some around in case of an earthquake and the collapse of civilization. Is it that the longer you have the cans, the more they leach, or do they get their leaching done early on? In other words, if you use up canned goods quickly (and get new ones, rotating stock) rather than letting the same old ones sit on the shelf, is that better, or worse?

I have to check out that recipe for homemade farm cheese!

My mom made our own mayonnaise when I was a kid. I’m not a huge fan of mayo but as a kid that was the only kind I would eat.

What I’m hearing from this experience is perhaps my shopping at Costco when I can’t shop in a bulk section is good because by buying larger items I’m saving some packaging. Perhaps those people who don’t need the large items can share with another small family. That’s what I used to do when I was in college – mostly for financial reasons but being green (I’m beginning to hate that word) can be quite good for the pocket book as well!

What a great post! I had to smile about eggs being for more than breakfast-that’s actually the one meal I don’t eat them. I think it’s the Italian in me coming out.

Couple other things that I think are very easy to make-yogurt and farm cheese. Farm cheese makes a great substitution for cottage cheese/ricotta. I use the directions in Sandor Ellix Katz’s book Wild Fermentation and in Stocking up by Carol Huppington and Rodale Press. Yogurt can be used as a substitution for sour cream. I’ve cut out almost all of my plastic tubs by making my own farmer’s cheese and yogurt.

Regarding mayo, if the first batch doesn’t turn out, try again. It can take a little practice.

Cheese is the one thing that I buy wrapped in plastic too. It would be the hardest food for me to give up :)

I just started piling up my produce in the cart instead of putting everything in plastic bags, and I am becoming immune to the looks I get! I scope out the cashiers to see which one looks most amenable to my needs. I live in the midwest and plastics rule here. Thanks for the great thoughts. Other than breaking myself at Whole Foods or some such, I have to deal with regular chain groceries.

Great advice, Beth! I’m so glad I didn’t email you to ask your opinion on juice boxes vs. bottled juice ;-) I never even thought about buying frozen — even though that’s all we ever had as kids!