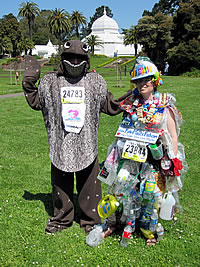 No plastic tally this week. Didn’t have time or energy to do it Sunday after WINNING THE COSTUME CONTEST AT THE 2009 BAY TO BREAKERS!

(I’ll add last week’s plastic to my next tally.)

Eli Saddler of Oceanhealth.org and I participated as a leatherback sea turtle and the plastic that kills it in an effort to bring awareness to the problems of plastic in the ocean and encourage Bay to Breakers attendees to bring their own bottles… next time. Mostly, we just had fun. Well, I did. Eli was sweating buckets in his sea turtle costume made of polar fleece from recycled plastic bottles. Who knew the weather in San Francisco would suddenly be so warm?

Click the above image to see our costumes up close. Here’s a short video of the day. We had a blast, and winning in the “Green” division of the costume contest is worth the sunburn I’ve got now. (And yes, I had my sunscreen with me, and no I didn’t remember to apply it until too late.)

1) Beth, how do you buy plastic-free sunscreen? I don’t. I gave up and bought a plastic tube of Alba Botanica fragrance-free mineral sunscreen, which is 7% titanium dioxide and free of parabens and nanoparticles. Of course, the plastic isn’t really worth it if I forget to put it on until after I’m already burned, huh?

2) Beth, how did you securely attach all those plastic pieces to your costume to ensure you didn’t leave a trail of plastic behind you on the route? With plastic, friends. Plastic fishing line and plastic strapping tape, all of which I already had in the house. No new plastic was purchased to make this costume.

3) Really? What about the plastic fish hanging from your helmet? Freecycle and thrift shops. Like I said, no new plastic.

4) What about the plastic bottles, cups, and straws? I don’t remember seeing those in your plastic tally. I had a grand time the day before collecting plastic from the streets of Oakland. I wanted my costume to truly reflect the most common types of plastic waste, especially the cold drink cups and straws that are ubiquitous at Starbucks this time of year. Sad that I was able to find the stuff so easily, huh?

5) What’s a leatherback sea turtle? I thought Eli looked like a dinosaur. Or a cockroach. Nope, he looks like a leatherback sea turtle, which is different from the green sea turtles you may be thinking of. Leatherback shells can be 6 feet wide. In fact, Eli tells me they are the world’s largest reptiles (or something like that.) And sadly, they die from eating plastic that they have mistaken for food.

6) Were you able to stay hydrated without resorting to bottled water? Almost. Eli had his reusable bottle and I had my reusable travel mug. I filled up at a cafe along the route. But once in the park, water stations serving Crystal Geyser from large plastic bottles were the only option, and I did fill up once from one of those bottles. I believe Eli made it the whole way plastic-free. Then, we celebrated with overpriced beer from the festival, served to us in our mug and water bottle.

We are wondering why the water stations used large bottles of water instead of larger jugs to save on waste. We’re going to suggest this change for next year. And in the video, you’ll see the thousands of paper cups (lined with plastic, of course) littering the raceway. This is a pretty common sight at all foot races, and I don’t know if there is a solution, especially when the weather is as hot as it was on Sunday.

7) Did you really wear that costume to and from the race on BART? Yep! And I’d do it again. Luckily, I hadn’t attached anything hard to the back of the costume, so I was able to sit down. Riding in to San Francisco in the morning, I was just one among many costumed freaks. Coming home was another matter. I gave the tourists something to talk about over dinner.

Great costumes and I think you made the point clear. I live in South Florida by the beach and just would not believe the stuff that washes ashore. This includes Turtles and fish caught in all kinds of debris discarded by boaters, cruise ships, freighters and other vessels. I am very concerned about our Oceans health as well.

It’s awesome and the only plastic is the cap!

You are so amazing, Beth! That costume is superb!

Congratulations on your well-deserved win in the costume contest, and I enjoyed your sea monster growling on the video very much!

The recently discovered leatherback turtle population mentioned by a previous commenter is in Gabon, and you can read about it on mongabay, which is a conservation news blog, and if you don’t read it, I highly highly recommend it.

And, did you see they found another population of Leatherbacks? I think it hit the Guardian this week.

I’m recently trying to reduce my own plastic consumption, and I am amazed at all the products you have found to replace plastics. I’ve visited your list of plastic changes, but I think it would be great if you had a list of all the plastic-less products you have reviewed/used and like.

Thanks for all your hard work.

You look great beth. Hot sun didn’t seem to affect you at all- Wasn’t that costume a bit warm? Way to go on wonning the costume contest!

Congratulations Beth. The costume looks great or as my assistant said: it’s trashy but it looks good.
I tallied my plastic on Sunday and wow, that was a time consuming project. Not to mention the “stress” associated with remembering to save it all (just for the week) so I could tally it. And putting up with my partner’s disinterest, only to be followed by his mirth. Anyway I have a renewed appreciation for what you do. Pics of my trash are coming your way later – maybe even today.

Congratulations on winning the costume contest! YAY! I hope your message was received by all! You are my plastic-free heroine. Thank you for opening my eyes further to our plastic problem.