It’s frustrating when electronic gadgets break, and not just because you have to go through the hassle of fixing or replacing them but because in doing so, a lot of waste is created. So when the headphone jack on my phone stopped working intermittently, I put off doing anything about it for several months. But finally, it got so bad that I could no longer use my headset, which meant an extra dose of radiation from putting my phone right against my head to talk (and of course, also not being able to listen to music and podcasts, but that’s a personal problem), so I decided it was time to do something about it.

I called CREDO Mobile, my phone provider, and was told I’d have to send it back to them for a replacement phone. I wondered if I should scout around for someone to open it up and try to fix it for me (as I did with my hair dryer, rice cooker, kitchen scale, and other appliances, with varying degrees of success), but when CREDO told me that opening up the case would void the warranty, I decided to skip the DIY strategy this time around.

When the replacement phone arrived, I was pleasantly surprised at the lack of plastic packaging and use of recycled content. First of all, there was no plastic tape on the outside of the box. And here’s what I found inside: 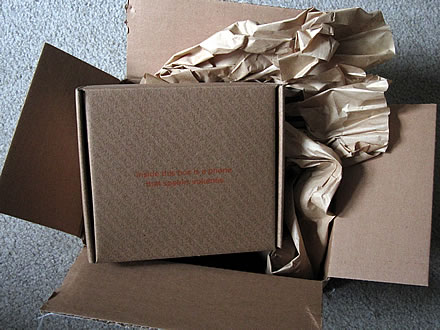 The cardboard is made from mostly post-consumer recycled content. 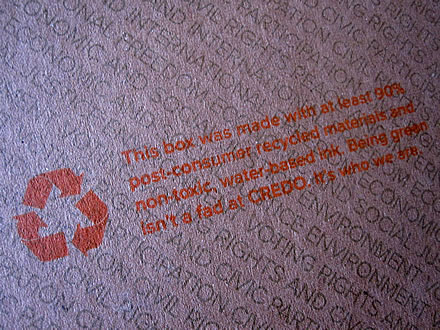 Inside the box, there was just one strip of plastic film holding the phone in place, which is a lot less plastic than most electronics are packaged in. I’m betting if they put their minds to it, they could find a way to do it completely plastic-free. 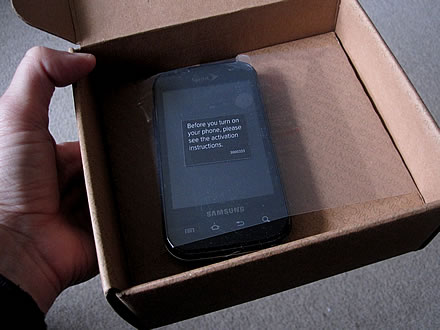 Under the phone was a new charger. Here is an area in which CREDO could improve. It would be a good idea to ask customers if they need a new charger in the first place before automatically including one with replacement phones. I certainly don’t need this one.  Of course, I can send this back to them with the broken phone, but how many customers would do that? Still, I was pleased to see the charger was not wrapped up in plastic packaging but only a single twist tie. 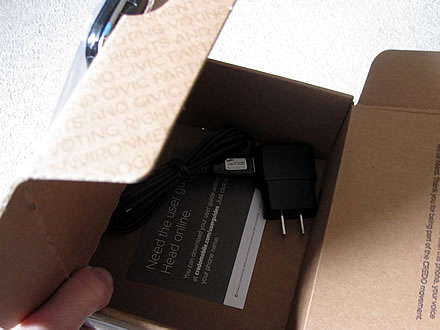 There were some bits of plastic stuck onto the phone itself, and I’m guessing that this is the work of the phone manufacturer rather than CREDO. Why do I need my phone covered in plastic film when it’s being delivered under plastic film in the box? 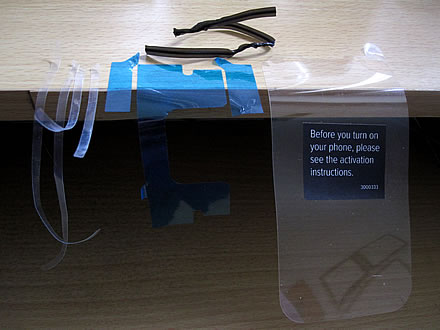 But here’s the frustrating part: The replacement phone didn’t work! It had the same problem with the headphone jack as my old phone!

Okay, at this point you might be wondering if the problem was really with the phone or if it is with my headphones. And to that, I reply, “Don’t be silly. I am a born trouble-shooter!” I tried different sets of headphones in both phones, and I also confirmed that the headphones worked fine in other devices. So I called CREDO again, and they are sending me a second replacement phone!

Here’s my question: Wouldn’t it be great if mobile phone companies (and other electronics companies) set up local repair shops where you could take devices to be tested and repaired instead of having to send them back? In the case of a phone, they could just give you a loaner to use for a few days while your old phone was being fixed. That’s the kind of society I want to live in. The fact that attempting to repair your own phone voids the warranty just contributes to our increasing e-waste problem, over-consumption of resources, and discourages the sense of self-sufficiency and accomplishment we achieve by fixing our own stuff.

Check out iFixIt’s awesome Self-Repair Manifesto (Download the poster!), which includes the following:

1) Repair is better than recycling.
2) Repair saves the planet.
3) Repair saves you money.
4) Repair teaches engineering.
5) If you can’t fix it, you don’t own it.

That last statement is interesting, isn’t it? Check out the manifesto to see what they mean.

What gadgets have you fixed lately? 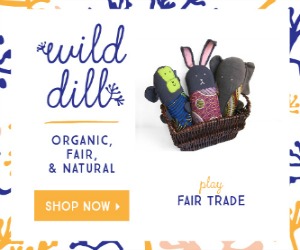 @Christine, by this measure I don’t own anything

@Anne, I know! And I barely eat anything that isn’t somehow wrapped or transported in plastic. We’ve got our work cut out for ourselves to make some big changes, and fast!

Thank you Beth–if you can’t fix it, you don’t own it. Food for thought!

I have had my phone sent in for repairs 2x and got a loaner phone for the duration. It was a while ago (2 cell phone back) but I thought it was a great promo. The last two never did break (although one did escape by jumping out of my coat pocket…never to be seen again.)

This is with Telus in Canada.

I fix a lot of my things. As a needle arts buff, my greatest accomplishment is troubleshooting and fixing my sewing machine when it goes on the fritz. So, or do I mean SEW? When my foot pedal went kaput, and I had a deadline to get one of my recycled plastic dresses finished in time for the runway show I entered, I went for the screwdriver and flashlight, rather than the gas pedal in my car and the time to run down to the repair store. (Time is a precious resource when you’re under the gun!). That being said,… Read more »

Love this topic and all the comments! I duct taped a large crack in a dustpan recently. For my car, I purchased a tube of white paint and a sanding block for a total cost of $3 and touched up dozens of rust spots; now the 94 Mazda looks so much better. I use the Zip It drain declogger for friends’ and my cleaning customers slow draining drains. It’s a great tool; nontoxic, cost $3.

I’m so proud of myself that I repaired almost every window screen in my house (accumulated from 15 years of cat, hail, kid, and shovel handle damage.) I looked up videos on YouTube and found that it was actually quite simple. It was much cheaper than replacing.

You can send you BlackBerry in to be repaired as well (or get replacement parts sent to you).

We fix almost everything that breaks around our house. I have good mechanical aptitude though. we will buy items at the thrift store for our lives that serve a need and most time I can find a made in America (that’s important to us) and usually repairable. amazingly, so many things cannot be fixed. the plastic parts are unrepairable or unable to find the replacement of it. as long as the consumer is willing to accept the “planned obsolescence” product. it will be a mainstay. I saw this trend for 25 years now, since I learned the concept. it affects… Read more »

We are fixers.I had to beg my husband once to let the dryer go to dryer heaven, he kept it alive for about 30 years.
This week I repaired the barbecue cover which was ripped.today I hope to replace the zipper on our plastic greenhouse.
We don’t have a lot of gadgets though(no cell phone, ipod etc) and we do try to buy well made appliances.

I have a long history with breaking phones. It’s not my fault I swear – I take such good care of my phones that they last past the 1-year warranty and then they start to break because the phone companies only make them to last for a year, assuming most people will get a new phone before a year is up (which is rediculous, though I know people like this). But whenever my phone breaks, I take it into the store (Sprint/Verizon) and they take the old one and give me a new one. Often the new on is refurbished,… Read more »

I fixed my slow-draining bathtub! I made my own mini-snake to fit down the drain, using one of those long twist-ties from lettuce and plenty of baking soda, vinegar & hot water. I’m a big believer in fixing what I own rather than replacing it w/new, wherever possible. Heck, I spend $45 to have my vacuum cleaner repaired, when I could have bought the same El Cheapo for the same $.

Here in the Philippines, there are loads of small businesses that specialize in mobile phone repairs. Almost everyone here has a mobile, so business is good for these guys. They can do most anything, but like you said, getting repairs automatically voids warranties. I cracked my old phone’s screen and I paid about P500 (That’s about $12) and it’s working great. Sometimes it’s better living in a poorer country (compared to the United States or the UK) where getting repairs is still vastly cheaper than getting a new phone. My friend in the US dropped his phone and busted the… Read more »

I hope I can find a solution to fix my toaster oven. It won’t shut off. Thanks for the inspiration!

Beckie, I would post on Craigslist for someone handy with electrical appliances to help you figure out what’s wrong and help you fix it. That’s what I did when my rice cooker broke!

If you are in the UK you can get your iPhone/iPod/iPad repaired much more cheaply than the Apple Store will quote you and much better than buying a new one. I have just had the batteries replaced in both my iPod and iPhone which will keep them going for much longer. You just pay via Paypal and mail the item to them & it comes back a couple of days later – return postage is included in the price.

I just sewed a button on my trousers. As you say, “If you can’t fix it, you don’t own it”. Therefore, I don’t own a cell phone, a personal computer (though I have an ancient one for work – which my husband, who is mechanically inclined, fixes), a television, or a car. I can’t imagine life without trousers, however, so I learned how to sew on buttons and patches early on.