Yesterday, I wrote about toothbrush companies incorrectly claiming that their toothbrush bristles were biodegradable, and I mentioned that I personally use a Brush with Bamboo toothbrush.  It’s not perfect, and the bristles are not biodegradable, but the difference is that the company isn’t claiming that they are.  And, after doing much research, they have come out with an upgraded toothbrush with bristles made from plant-based plastic instead of petroleum-based plastic.  Yes, they are still plastic.  But the company is striving to get away from fossil fuels, and I think this new bristle could be a step in the right direction.

Watch this video about the Kumar family and all of the steps they have taken not only to develop the most sustainable toothbrush, but also to create an urban educational organic farm in their neighborhood. 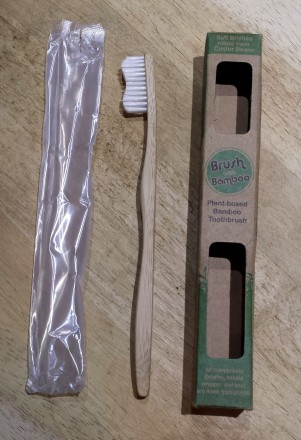 How Brush with Bamboo Could Be Better

What kind of toothbrush do you use? I’ve been reading up on tampico fibres… they seem completely natural and biodegradable – and are already being used in other cleaning brushes (dish brushes; toilet brushes….) Any word on if, when and why or why not these are being used as toothbrush bristles?

what about brush naked?

Hi I read your article and very detail oriented and very helpful. I live in India and I started searching for 100% plastic free and 100 % non harmful to environment toothbrush and toothpaste as well and I came across this company for plastic alternative toothbrush again claiming nylon 4 for bristles : https://www.bambooindia.in/product/bamboo-toothbrush-charcoal-adult/40/

Do you know if their claims are true? I have not got them tested. Do you know which lab I can get it tested in India? I have no clue. Your help will be much appreciated. They work pretty well and are long lasting and whiten teeth but I would like to know if they are completely compostable and 100% non harmful to environment. Also do you have any idea of a 100% plastic free toothpaste internationally available? I have been trying to find that as well. Love your work! Please keep up your awesome work!

For consideration:
“However, harvesting castor beans may not be without risk. Allergenic compounds found on the plant surface can cause permanent nerve damage, making the
harvest of castor beans a human health risk. India, Brazil, and China are the major crop producers, and the workers suffer harmful side effects from working with these plants.”
From “Extraction, Refining and Characterization of Sudanese Castor Bean Oil”, authored by Abdelaziz,A .I. M., Elamin, I. H. M., Gasmelseed, G. A., Abdalla, B. K. in Journal of Chemical Engineering, January 2014.

Where can I buy the toothbrush you have reviewed above?

Hi, And this brand: Brush Naked, the say The 100% biodegradable, plant-based bristles are made from corn and tapioca and will last about a month. These are definitely stiffer than our nylon bristles. The ‘softness’ of the bristles is actually determined by the diameter of the bristle without any consideration for the material it’s made from. Crazy, right? Anyways, we think using a 100% biodegradable toothbrush is worth it, but if you’re not quite there our nylon bristle toothbrushes will last as long as a regular toothbrush.

Not sure if I’m correct, but it seems this toothbrush is plastic free!

Almost plastic-free. The bristles are not 100% plant-based, but almost.

on amazon £48 for 4 brushes eppp I understand the work going into it, but can’t afford that

I would be happy to purchase a brush with bamboo toothbrush without any bag at all.

I don’t know if you’ve been checking out other companies in the years since this post but brush naked is currently claiming to have a fully biodegradable toothbrush with plant-based bristles made from corn and tapioca. I’m interested to try it out and see if it is all it’s cracked up to be.

I have seen it, but I believe they also state it doesn’t hold up well. I need to try it.

What is your latest, now that it is 2018… are you still using brush with bamboo. I trust you as a resource since there are soooo many out there now. : )

So what are we supposed to do with the plastic wrapper – just throw them away?

It’s compostable. Do you have a compost bin or city-wide compost service? If not, then yes, you would just have to throw it away. I agree it is less than ideal.

Hi, Have you by any chance tested the bristles on the ‘Save Some Green’ bamboo toothbrushes? They claim they are nylon 4 but i was just wondering if you had tested them?

i use Brush with Bamboo and am delighted to find that they have improved the bristles, i know from talking to one of the family members that they have been working on trying to get plastic out of the bristles. And after reading you blog right before this i want to tell you, China has very little animal protection laws and pigs among other animals are often treated terribly. Years ago i read a travel book by Paul Theroux “Riding the Iron Rooster” about his time in China and how he saw pigs eyes sewn shut, i cannot recall why they did that. And at least in the USA 50% of factory farming income comes from animal by-products so no boar bristles for me

Hello!
I living in Edinburgh,originally from Spain.

Check the web. http://www.savesomegreen.com I think the bristles are Nylon… Im start to be a plastic free! Or…I try!
All the best!

I am from Mauritius island in the Indian Ocean and there is not a single place which sells plastic free toothbrushes. We have to import them. I am currently using those conventional plastic toothbrushes. Do you have any suggestions how can i upcycle them? I try to remove the bristles with a plier, but, they are so hard. Thanks a lot.

I use a Terradent toothbrush, which has a plastic handle. The heads are replaceable. I find that I need a very small toothbrush so this company’s child sized toothbrush is perfect for me.

Hi, Thanks for your article. Makes me realize that my toothbrush “Ecobamboo” was not the best ever. I live in France so Brush with Bamboo is not the best solution for me.

After some research, I have discovered a german fabric “Kost Kamm”. They say that their toothbrushes are made of wood from Germany and bristles made from pig hair (from China).

I have bought two “Kost Kamm” toothbrushes on a french website called “Bebe au naturel” and discovered that it’s an enterprise based in Bretagne, west of France, a few miles away from where I live. I think it’s a good way to support my local economy.

I only hope that “Kost Kamm” fabric is not lying about their product.

Hi Beth, love reading your posts. You are one of my inspirations and I mention you as well on my website http://www.beachcleaner.de :)
I use hydrophill toothbrush, bamboo with .. ?!? do you know it?

I don’t know that one. What claims do they make about the bristle material? If they don’t say what it’s made of, you could ask them and let us know what they say.

First I want to thank you for all the great articles, I really enjoy reading them!

I was wondering if you’d heard of the brush naked toothbrushes? I was desperately looking for a plastic free toothbrush and discovered that company. They claim to use bamboo bristles and a plastic free package.

I just ordered 4 toothbrushes, so I can’t yet tell you what I think about them, but so far I like their concept. There is an added bonus, the company is based in British-Columbia where I live, so that means the package won’t travel that far to reach me! Let me know what you think…

Hi. Brush Naked toothbrush bristles are not bamboo. From the front page of the site:

“Our toothbrushes are made with a 100% bamboo handle and environmentally-friendly packaging! The bristles are made from a BPA-free polymer. When you’re ready for a new toothbrush, simply break the head off your current toothbrush and throw the handle in the compost. Or you can simply pull the bristles out with pliers.”

Darn, why didn’t I see that?! In their blog post they say the bristles are made from bamboo so that’s why I got confused… Thanks for the info and the great blog!

Brush naked now have a corn and tapioca bristle on their bamboo range, stating stiffer than nylon and last a month

Both of those things worry me. Dentists recommend soft bristles as better for gums, so a stiffer bristle is not something I would want. And the fact that they only last a month means that more material has to be produced and shipped. I’m wondering if it might not cancel out the environmental benefit. That said, I’m encouraged to see companies exploring alternative materials. Perhaps they will be able to improve the quality and durability of the plant-based bristles.

Hi Beth, I’m writing from Italy :)
I discover your blog by watching ‘Bag it!’ and let me say that it’s one of my favourites! By the way, I was reading the article and I remembered about a completely organic solution, something like a tooth brush; it’s called Miswak or Siwak and it’s a stick by salvadora persica plant, used in ancient time (even now in some areas) in North Africa and Middle East area. This plant has beneficial effects for teeth and gums (maybe it’s antibacterical). I never tried this method for brushing teeth but I’m really curious! Did you hear about that before?
Thank you!!
Sabina

Hi, Sabina. I tried it with neem sticks. It’s a good method but didn’t really work for me personally. https://myplasticfreelife.com/2011/06/verdict-on-neem-chew-stick-toothbrushes/

I, too, use Brush with Bamboo, and am generally happy with it, but have had some bristles fall out with use over time–sometimes a whole tuft of them at once–very unpleasant feeling in the mouth. Even with this issue, I will stick with this brush in my quest to eliminate plastics from my life.

Thanks for another informative post Beth, seems like the 100% plastic free brush is only a matter of time. I have recently been trying out vegetable alternatives to toothbrushes and dental floss. I find that the tough fibre in swiss chard stalks peel off quite easily and make good dental floss. Thick ribbons of carrot also make useful tooth cleaner to rub over the teeth. I also have tried chewing the ends of kale stalks, and they make a reasonable pseudo-brush. Will continue to explore more alternatives, next will be cinnamon sticks… My whole viewpoint about environmental matters has been most positively affected by the information you give out.