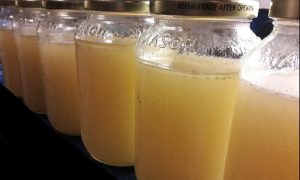 Back in April I promised a post about making broth.  Well, here it is.  Actually, this is more like two posts in one.  There’s broth that you make from scratch in order to get all the nutritious goodness out of the food scraps you have left, and then there’s broth (or stock) that you need in a hurry for a recipe when you don’t have time to make broth from scratch and you don’t have any on hand.

(The word broth is starting to sound really funny after saying it in my head a whole bunch of times in one paragraph.  If I capitalize the first letter, it could be the name of a new Game of Thrones character.)

Five years ago, I touted the goodness of Better Than Bouillon broth concentrate that comes in a glass jar and eliminates the need for broth in a BPA-lined can or plastic-lined box.  Using a concentrate helps prevent waste and saves money since you’re not paying for packaged water!

But this year, I’ve been trying to find ways to eliminate even packaged foods in glass jars if I can easily make them myself.  So I started Googling, and sure enough, I found a recipe on the 101 Cookbooks website for making your own homemade broth concentrate that’s even better than Better Than Bouillon.

I looked at the ingredients in her recipe and decided to tweak it for my own personal tastes.  Here are the plastic-free ingredients I used:

I’m not going to tell you how much of each ingredient to use because honestly, I made this stuff so long ago that I don’t remember how much I used.  But adding up the quantities in the 101 Cookbooks recipe, it looks like a ratio of about 75% vegetables to 25% salt by weight.  If it seems like a lot of salt, you’re right.  But remember, we’re making a concentrate.  A little goes a long way.

Pulse the veggies together in a food processor.  Add the salt, and continue to pulse until you have a paste.  It can be as fine or chunky as you prefer.  Store in a glass jar. 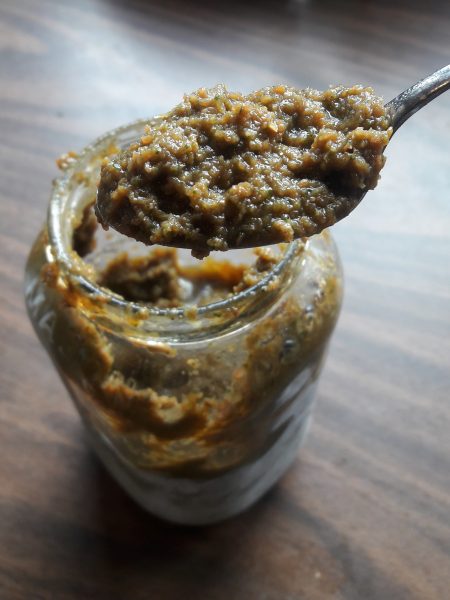 And now, here is where the magic happens:  You know all that salt you added that you thought maybe was too much?  That salt actually allows you to store your broth concentrate in the freezer pretty much forever.  The salt prevents it from getting hard, and you can scoop out spoonfuls as needed. 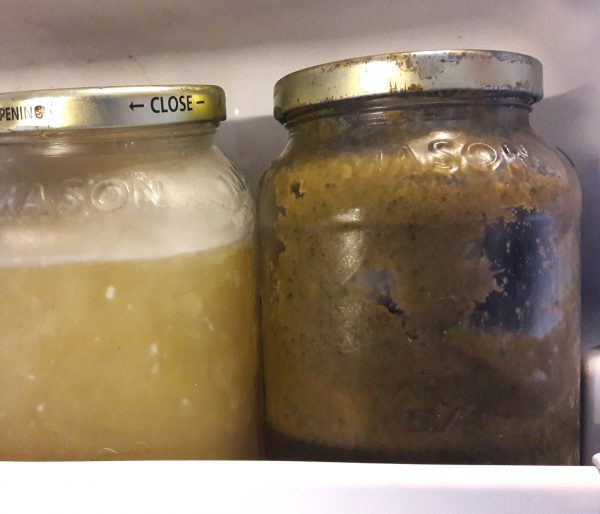 To use the concentrate, just add 1 teaspoon per cup of hot water — or whatever ratio you prefer.  I also add the concentrate to homemade bone broth when I don’t have veggie scraps handy.

Since I started eating meat again, I routinely save the bones to extract as much nutrition as possible and avoid food waste.  As I mentioned in my post about roasting chickens, I’ll also cut out the raw backbone and save that too since raw bones contain more nutrients than cooked. 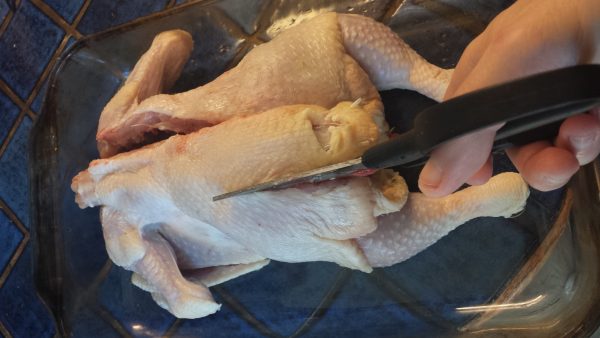 I save up my bones, both raw and cooked, in reused glass jars or stainless steel containers in the freezer.  (Life Without Plastic’s rectangular containers are great for saving up large amounts of food scraps.) 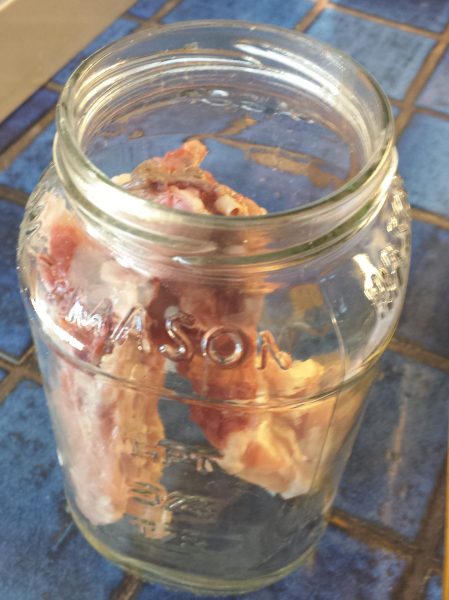 It used to be that I’d avoid making broth because it took many hours on the stove.  I didn’t want to spend the time on it, and I didn’t like the fact that I was using so much energy.  But with a pressure cooker, I can get the job done in an hour.  (Here’s my post about the stainless steel pressure cooker I use.)

TheKitchn website has a nice article about making chicken stock in the pressure cooker.  I use it as a reference but wish they hadn’t stored hot broth in plastic containers!

I throw in all the bones, water, and a hefty scoop of homemade broth concentrate for flavor.  (This is the carcass from our Thanksgiving turkey this year. Looks like I tossed in a bay leaf too.  Honestly, my phone camera is an extension of my brain at this point.) 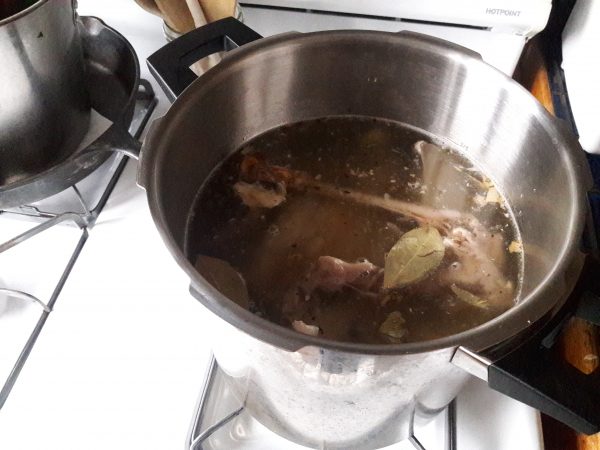 Put on the lid, and let the pot come to pressure. 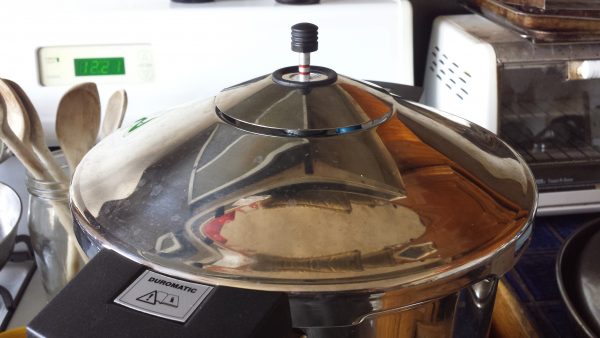 After an hour, I set the pot on a back burner to cool and release its pressure naturally.  Then, strain through a sieve and pour into reused glass jars.  Be careful to only fill the jars to just under where the neck starts to narrow to prevent breakage in the freezer. 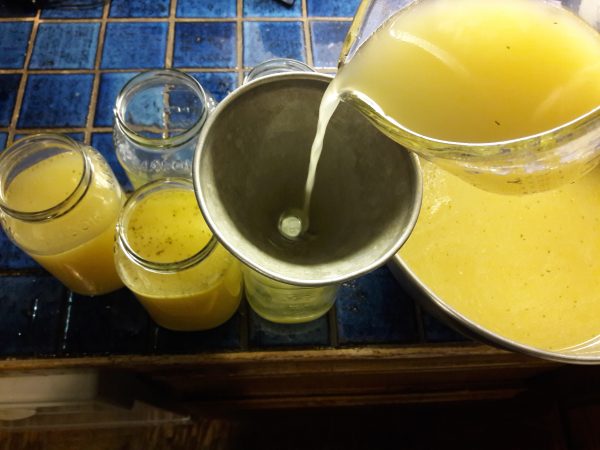 I allow the jars to cool down on the countertop with the lids on loose before tightening the lids and storing them in the freezer. 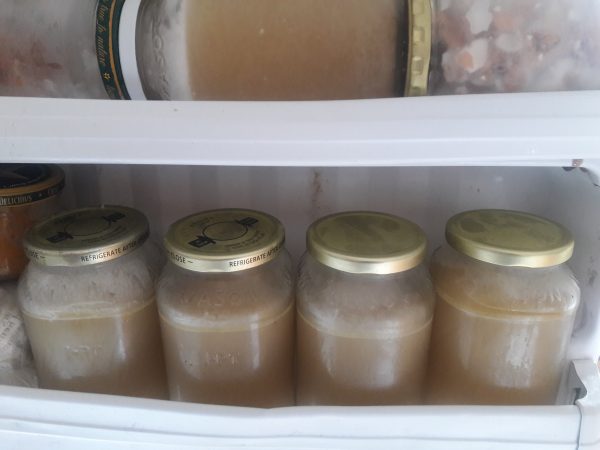 Thaw slowly when you’re ready to use the broth.  After all these years, we still have not had a glass jar break in the freezer. I do not understand about the raw bones -if they are more nutritious raw, WHAT DO YOU DO WITH THEM? Are they for your dogs? Raw chicken can be toxic if not from a great source, so could you be as specific as possible? Thanks

I used to make a better than bullion substitute with the pulp from juiced veggies and salt. Lasted forever in the freezer and quite tasty! I just throw all my bones in the crock pot, with the juices from cooking the meat. Add water to cover and a tablespoon of ac vinegar. Let it go all day or all night, bottle, and use or freeze.

What a great idea! I love Better than Bouillon, but I like to cook from scratch so I can control the ingredients. I wonder if this would be a good way to use up a few of the veggies in my fridge that are on the verge of not being good for standard eating?

Anyhow, when i make broth from scratch, in addition to the chicken backbone, carcass and spices, I freeze the ends from onions and other random veggies, and toss them in the pot too. And when I bake or roast chicken, I always deglaze the pan and save the liquid in the freezer to add to my next broth. I also save and freeze other random appropriate liquids to add to the mix – like liquid that veggies were cooked in or liquid from rinsing out a jar of spaghetti sauce. It makes for a very flavorful broth although it doesn’t always taste exactly the same each time I make it.

And my last annoying broth tip is to always brown any bits of raw meat or onions before boiling them – it really enhances the flavor. Oh, I lied… one more thing. They say (I don’t know how true this is) that you should always add a splash of vinegar to the water because it helps to pull the minerals out of the bones and makes the broth more nutritious. I try to remember to do that, but I don’t really know if it makes a difference of not.

Thanks again for the bouillon tip – I’m gonna try making some!