Confession:  I really hate writing about politics.  I’d much rather write fun posts about personal strategies to avoid plastic or profiles of companies offering plastic-free alternatives.  But these are not normal times, and nothing less than the health of all living beings on planet Earth is at stake.  So, just as I did before the most recent election, I’m once again getting out of my comfort zone to urge you to action.

(If you want to take action before reading this entire article, skip to here.)

This is not a joke, and it’s not fake news.  On Friday, Feb 5, Rep Matt Gaetz (Rep-FL) introduced a bill to Terminate the Environmental Protection Agency (H.R 861).  Why?  On his Facebook page, he posted his reason: “To better protect the environment we should abolish the EPA and downstream resources to states for more effective & efficient protection.” 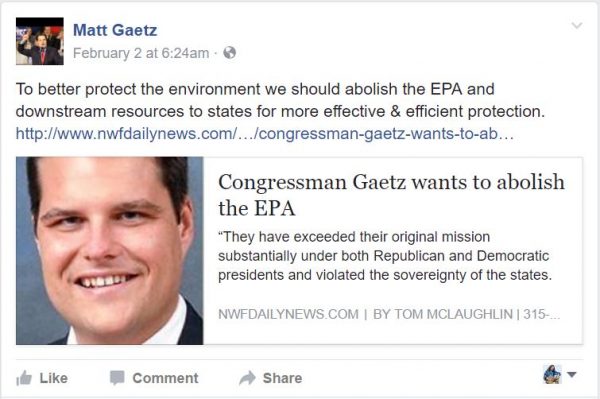 Here is further information on Matt Gaetz and the three other representatives who co-sponsored the bill.

The problem with Gaetz’s logic is that pollution does not respect state lines.  Of course, we need strong environmental protections on the state level.  No one is arguing against that.  But relying on each state to set its own regulations without federal oversight risks allowing polluted air and water from a state with weaker protections to contaminate the air and water of states with stronger protections, and that is not just or fair.  And yes, I am writing this as someone living in California, a state with some of the most stringent environmental protections in the nation.

Here’s how Gaetz responded to a Facebook commenter who made a similar point:  “Abolishing the EPA doesn’t diminish the rights of states to enforce standards against one another in federal court.”

So, according to Gaetz, we’re supposed to wait until our air and water are already polluted to sue our neighbors in court and wait for a decision from a judge before steps are taken to reverse the damage?  How many people will become sick while we’re waiting?  And how much money will it cost for cleanup efforts after the fact?  Wouldn’t it be more efficient to prevent pollution in the first place?  We need consistent standards that apply to all 50 states.

In China, one of the most polluted countries on the planet, those with money invest in expensive air and water filtration systems to protect their families from pollution so bad that people are forced to wear masks when they venture out of the house.  (I personally visited Taiwan in the summer of 2014 and had to wear a mask while touring the City of Kaohsiung because the air made my throat burn.)

People with money have it bad, but those without money have it much worse.  CNN published a report last month entitled, “Beijing smog: A tale of two cities.”

“Air pollution exacerbates inequality between the rich and poor in urban China,” Matthew Kahn, a professor of economics at the University of Southern California, told CNN in an email.

“The rich live in cleaner parts of the city and on more polluted days they can drive to work, work inside, access better doctors, have second homes in the countryside and have expensive and effective air filters.”

Beijing risks becoming a tale of two cities, a place where the rich and poor don’t even breathe the same air.

We have similar inequities here in the United States.  Air and water pollution disproportionately affect residents of lower income neighborhoods.  But before the Trump administration came to power this year, EPA had just released a 4-year Environmental Justice Strategic Plan for 2016 – 2020 to address these disparities.  (The website is still up, but the new administration has put the program on hold, and there’s no telling how much of this plan will be gutted or eliminated altogether.) Terminating or weakening the EPA will do away with these programs.  In the opening to the US EPA EJ 2020 Strategic Plan (a PDF, which I have archived), former EPA Administrator Gina McCarthy writes:

Clean water and clean air don’t just happen, especially in low-income and minority communities. These are essential resources that we have to invest in protecting and that starts with communities, cities, states and tribes. This problem isn’t easy. We won’t fix it overnight. It’s only when we work together that we will be able to deliver these basic rights to every American, no matter who they are, where they live, or how much money they make. Everyone deserves to have their health protected from environmental exposures. – EPA Administrator Gina McCarthy

In its first week in office, the Trump administration ordered the EPA to freeze all grants and contracts, including those for the environmental justice programs I mentioned above, and nominated Scott Pruitt as the new EPA Administrator.

Pruitt is the attorney general of Oklahoma.  During his time in office, he sued the Environmental Protection Agency 14 times, and according to the New York Times, in 13 of those cases, the co-parties to those lawsuits included companies that had contributed to him or a Pruitt-affiliated campaign committee.  Instead of protecting the health of the people of Oklahoma, he protected the interests of the oil and gas industry.  And, in one case in which the State of Oklahoma sued the State of Arkansas to clean up chicken manure that had run into Oklahoma’s waterways (the kind of suit Matt Gaetz seems to think is the solution for inter-state pollution), Pruitt “quietly negotiated a deal to simply study the problem further.”  According to the Times, he had taken large amounts of money from the poultry industry.

Bill Moyers released this video report on why Scott Pruitt is unfit to run the EPA.  Please watch it and share.

Moyers has a new post on what a de-funded EPA would mean for America.

And my friend Diane McEachern wrote this summary of 12 reasons to tell your senator to vote no on Scott Pruitt for EPA.

Pruitt’s confirmation is scheduled for a vote of the Full Senate early this week — maybe even today! So if you haven’t already, please contact your senators ASAP.  I’m so sorry I procrastinated on writing this article until now.  If he gets confirmed it will be ALL MY FAULT!  Please don’t let that happen.

So, what can you do?  Call your senators and representatives now.  Don’t wait.  I mean, if you just woke up and need to pee, that’s okay.  But before you do anything else, please make a few very quick phone calls.  If you can’t get through to their Washington office, call the local office.  Click on the senator or representative’s name at the following links to be taken to their personal website, which contains their local office information.

Ask your Senators to vote NO on Scott Pruitt’s confirmation as EPA Administrator.  Here’s how to find your Senators’ contact information: https://www.senate.gov/senators/contact/

Here’s a quick script you can use.  “Hello. I’m <your name>, a constituent from <your zip code>. I want <your Senator’s name> to OPPOSE Scott Pruitt’s confirmation as head of the Environmental Protection Agency.”  That’s it.  That’s all you need to say.

Ask your representative to vote NO on HR 861 to terminate the EPA.  Here’s how to find your Representative’s contact information:  http://www.house.gov/representatives/find/

Here’s a quick script you can use.  “Hello. I’m <your name>, a constituent from <your zip code>. I want <your Representative’s name> to VOTE NO on HR 861 to terminate the  Environmental Protection Agency.”

Sign up for information and action alerts from environmental organizations you trust.  Here are just five of the organizations opposing Scott Pruitt’s nomination (the first five I could think of off the top of my head this morning):

Are you as scared as I am for the state of our country and planet?  What other actions are you taking? 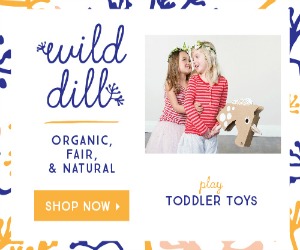 Thank you for having the courage to speak up, Beth! I appreciate this post and your pre-election post on the CA bag ban proposals. I might have been misled by the plastic industry’s competing bag proposal had it not been for your post. Fortunately, our senators in CA are pretty good, but, if you live in CA and want to call, here are the numbers for Feinstein and Harris, respectively: 202-224-3841 and 202-224-3553.

This is seriously depressing.

Thank you for speaking up.

Done! Unfortunately my rep is already a cosponsor of HR 637 (limiting the power of the EPA) so I don’t have much hope there, but on your urging I’ve emailed him to make my position known. This has been a wakeup call to me that I really need to be voting in every election. Both my senators were elected when I didn’t cast a ballot. I never thought I’d come to regret it this much. :(

Bless you for sharing this!